Patricia Marx follows the course of a darkly comic modern relationship between the seemingly perfect Wally Yez and lingerie designer Imogene Gilfeather, who meet while waiting in line for apple pie and embark on an unbalanced love affair.

NPR stories about Starting From Happy 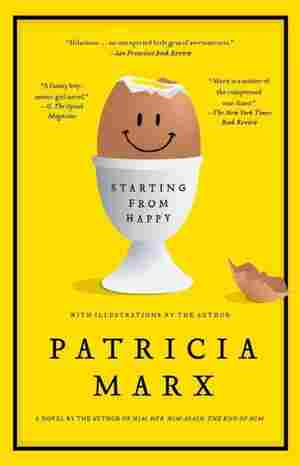 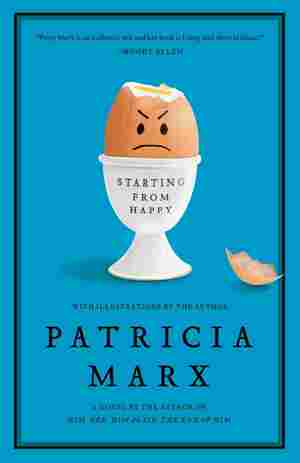 September 13, 2011 • When lingerie designer Imogene Gilfeather hears that Wally Yez is the perfect guy, her response is telling: "Perfect ... is not my type." Comedy writer Patricia Marx tracks the beautiful — and absurd — relationship that follows in her new novel, Starting from Happy.

It did not, as a matter of fact, start from happy for either of them. Imogene Gilfeather had just had a cruel haircut and for this reason, or maybe another, expressed little interest that night when the fellow sitting next to her on the bus down Broadway said he knew the perfect guy for her.

"Perfect," said Imogene Gilfeather, "is not my type."

The perfect guy was Wally Yez. As Imogene Gilfeather was rejecting Wally Yez sight unseen, Wally's beloved pet black squirrel was being electrocuted. The rodent, it seems, had ventured onto the amateur radio antenna that Wally had set up on his roof, most likely amateurishly.

"Damn," Wally said, wishing he had not gone in with Gwen on the dual membership to the American Museum of Natural History. Wally was a big believer in devotion. Then Wally remembered that the membership was a promotional offer, good for only three months.

There will be no representations of underwear, not even long johns, in Starting from Happy. Patty is far too demure to enter into a realm so salacious. Nor will she pander to the oglers or the shoppers. Also, she wouldn't know how to begin to draw a brassiere. Instead of Featherware, then: a cactus, of the utmost propriety.

Wally and Gwen renewed their dual membership to the American Museum of Natural History. Every so often, it crossed Wally's mind: Would there come a time when he and Gwen would upgrade to the family membership?

Wally took Gwen to a swank supper club on the river to celebrate the seven-month anniversary of their first meal together. While the band played a melancholy "Can't Buy Me Love," Wally presented Gwen with a locket. In the candlelight, Gwen read aloud the inscription on the gold-plated heart: "Twenty-five Beautiful Years Together. Norman and Arlene."

"Whoops," said Wally, promising to pick up the correct necklace in the morning, and then Wally and Gwen shared a tepid laugh.

Wally also gave Gwen a lifetime membership to the New York City Police Museum. "A lady from the Widows' and Children's Benefit Fund called, and how could I hurt her feelings?" said Wally.

Gwen gave Wally a scale for the bathroom.

The next day, Wally stood on the scale because there was no room in the bathroom to stand anywhere else. Wally wasn't feeling too hot, owing perhaps to the hollandaise sauce at the swank supper club. Hollandaise sauce or no hollandaise sauce, Gwen insisted on Wally's attendance at the going-away clambake that afternoon for the old man who cleaned the pipettes in Gwen and Wally's lab.

In the apple pie line at the clambake, Wally was introduced to one of the big deals in sleep disorder research, Dr. Ron de Jean (pronounced first like the Kurosawa film, and then like the mustard), and also to his date. "I know who you are," Dr. Ron de Jean's date said to Wally as soon as she heard his name. "You are the man I was supposed to marry." She was Imogene Gilfeather.

"And you," said Wally, "are the woman who . . ." He was going to say something about undergarments, but instead he said, ". . . and you are the woman who makes souffles." She did not look like a woman who specialized in lace or egg whites, thought Wally. Tall and thin, with jutting cheeks and fiery red hair, she looked like a kitchen match that stubbornly would not light. If Imogene produced a culinary piece de resistance, Wally guessed it would be an orange-ginger vinaigrette or maybe a watercress sandwich with the crusts intact.

"Souffles?" Imogene said. "I am not insouciant enough for souffles." Had this comment been devised to beguile? Patty does not know. Wally was, nonetheless, beguiled. He watched Imogene tilt her head forward and rearrange her hair into a high ponytail.

But Wally, you may remember, was a big believer in devotion. He and Gwen said their adieus to the host and hostess. That night the four winds blew fiercely through their bedroom.

Imogene Gilfeather and Ron de Jean removed themselves from the going-away clambake before coffee and taffy were served. Ron was eager to return to his lab to see if any of the subjects had woken up while he was gone. Imogene was antsy, too. She had been seized with an idea for a new bus-tier while chatting with the guy whose shirt was not tucked in (Wally). Imogene wanted to go home and make a sketch before she forgot where to put the snaps.

The taxi pulled up to Imogene's. "Might be able to squeeze in a few minutes," Ron de Jean said. Not much later, he said, "Sorry I can't stay longer. Can you help me buckle my belt?"

"Why is it that men always assume women want them to spend the night?" Imogene said, but Ron did not hear her say it.

Imogene scrolled through her e-mail. Ninety-seven of them — most from friends, a few from rayon and Lycra vendors, three identical messages from someone named Mirilla Borth promising her a job in the Turkmenistan diplomatic corps, and one from Saks Fifth Avenue which filled her with hope that the chain might one day carry Featherware.