Observations on the Mysteries of Photography

Academy Award-wining filmmaker Errol Morris investigates the hidden truths behind a series of documentary photographs. With his keen sense of irony, skepticism and humor, Morris reveals in these and many other investigations how photographs can obscure as much as they reveal and how what we see is often determined by our beliefs.

NPR stories about Believing Is Seeing 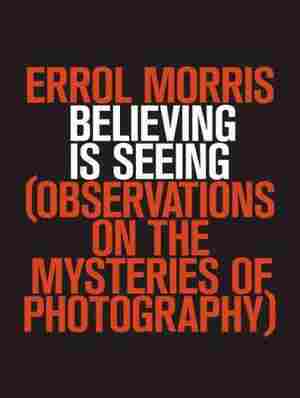 September 17, 2011 • In his new book about photography, Believing Is Seeing, documentary filmmaker Errol Morris talks about what you don't see in photographs and the importance of what lies outside the frame. He says photographers have been posing photos as long as they've been taking them.

I have absolutely no memory of my father. Other than a few photographs, all I have is an elaborate lithograph of a skull drawn with the words of the Declaration of Independence: "We hold these truths to be self-evident." It was a prize for excellence from his anatomy professor at the University of Edinburgh. (In the 1930s it was extremely difficult for a Jew to gain admission to one of the top American medical schools since there were quotas in place. Hence, my father ended up in Edinburgh.)

There were also the limited recollections of my father from my mother, my brother, and other family members. My brother, who I believe was horribly traumatized by my father's death, never spoke about him.1 No stories, no anecdotes. Nothing. (Maybe I was reluctant to ask him, but he never volunteered information.) My mother also said very little. It was as though there was a secret about my father and I had to ﬁgure out what it was. Although my mother often suggested that I should become a physician — "like your father," she would say — I told her that I wanted to become an artist like her. After all, I knew my mother; I didn't know him.

For years after my father died, his doctor's office was still part of the house — downstairs, in what later became the living room. There were hundreds of medical books with grotesque pictures of various diseases and deformities. There was his chair, his pipe, his tobacco jar. But he himself was absent. My mother, on the other hand, was very much present. She was an exceptional musician, a graduate of Juilliard, and an extraordinary sight-reader. I was in my twenties before I realized that not every mother plays Schumann's Carnaval or Schubert's Wanderer Fantasy.

Hardy would often use my father as a warning when I misbehaved. "Your father would never have tolerated this behavior," she would tell me. But my father was dead, so the issue of whether he would or would not have tolerated my behavior seemed remote, at best academic. At some point, I learned from Hardy that my father often fought with my brother and that my father called me "the little professor."

In a sense, the photographs both gave me my father and took him away. Photographs put his image in front of me, but they also acutely reminded me of his absence. He existed for me primarily in photographs accompanied by sketchy family stories. There was ample evidence that he had once been in the house with us, but nevertheless, he was inherently unknowable to me. Who was he? I have no idea. I have the photographs, but I can only imagine who he actually was.

There is a further complication. Just after my father's death, my eyes were operated on. I had strabismus, a condition in which one of the eyes is misaligned. I was wall-eyed, like Jean-Paul Sartre. With strabismus there is nothing functionally wrong with the eye, just with its alignment. Once the eye has been put back into the correct position, the brain can then integrate the output of the two eyes into a single stereoscopic image; that is, it can produce normal vision. In order to promote the development of the "lazy eye," a patch is placed over the good eye. This treatment doesn't always work, and I reduced whatever chances I had for normal vision, by repeatedly tearing the patch off. My mother bought me a Philco television as a reward for wearing the eye patch. I dutifully watched Winky-Dink and You, The Howdy Doody Show, and Captain Video, but I still refused to wear the patch. It was my fault, and it left me without normal stereoscopic vision (stereopsis) and limited vision in my left eye.

Ironically, the eye surgeon was Ben Esterman, the family ophthalmologist, who became my stepfather twenty years later. When I was older, my mother told me how she had come to visit me in the hospital shortly after my operation. Both my eyes were wrapped in gauze like something out of a ﬁlm noir story, except I was a small child. My future stepfather said to my mother, "Don't say anything. Don't let him know you're here, because if he can't see you it will be too upsetting." My wife Julia calls it a new version of the Oedipus story: my future stepfather blinds me and then marries my mother. But it all ended happily. My mother married Ben when I was in my early twenties. They were married close to thirty years, and without both of them, I could never have become a writer and ﬁlmmaker.

If I share anything with Oedipus, it is asking one too many questions. Why do I see things the way I do? I suppose it must have something to do with my skepticism about vision. Did this inﬂuence the way I look at still photographs or my skeptical approach to documentary ﬁlmmaking? I wish I could pin it down more precisely.

Maybe that's what I'm trying to do here.

Excerpted from Believing Is Seeing: Observations on the Mysteries of Photography by Errol Morris. Reprinted by arrangement with The Penguin Press, a member of Penguin Group (USA), Inc. Copyright September 2011.