A Spirited History of Taverns and Saloons, Speakeasies and Grog Shops

In America Walks into a Bar, Christine Sismondo recounts the rich and fascinating history of an institution that has often been reviled, but has always been central to American life. She traces the tavern from England to New England, showing how even the Puritans valued "a good Beere."

NPR stories about America Walks Into A Bar 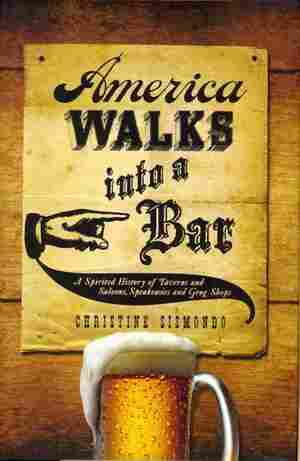 September 18, 2011 • The United States as we know it was born in a bar, according to a new history of drinking in America. Author Christine Sismondo says most of the major events of the Revolution were plotted in colonial taverns, the start of a grand old American tradition

Excerpt: America Walks Into A Bar

PROLOGUE – A LITTLE KID WALKS INTO A BAR

It was the highlight of any family trip—better than cable in the room, the swimming pool, better even than being allowed to order pancakes for breakfast and Coke with dinner.

The hotel bar was magic was where adults seemed to wonderfully transform from tightly wound disciplinarian micro-managers into lively, indulgent, joyful humans. It was like the Invasion of the Body Snatchers – in reverse. In the bar, you could find smiles everywhere, strangers giving away quarters simply to bring a thrill to a child's face, doting waitresses and their endless provision of sodas and salty snacks. The couches were rich and velvety; the brightly-colored menus were full of exotic fare. Adults seemed genuinely happy.

To some, so early an early introduction to bars will fall somewhere along a continuum between scandalous and tragic. In defense of my parents they had little choice. They traveled for business frequently and, rather than leave me at home or alone in a hotel room, they brought me with them to the place where they met colleagues and clients to close deals and solidify relationships.

As soon as I could get into bars on my own, I made it my mission to get into as many as I could, particularly in my home city of Toronto. I wanted what so many people wanted: a place where you could simply drop in and stand a decent chance of running into somebody you knew.

Before long I found that place, an urban neighborhood bar called Kilgours'. I worked there and, almost indiscernibly, grew to be a part of a community. This community spanned several bars – the dive two doors down with the little pool table and the big slushy margaritas; the faux-British pub on the next corner that catered more to the student crowd; the 19th century hotel, a block the other way, that, on Saturday afternoons, gave over its large main room to a spirited jam session where locals rocked and little kids danced. When Claire was unable to pay for her cancer treatments, patrons and co-workers staged a benefit. When Joe lost his job, cooks would accidentally make a steak for fictional customers, then slide the mistake his way. We all made sure to rotate buying drinks for those down on their luck so they could stay in the circle. And when my own life fell apart over an impetuous plan to teach English in Korea, patrons recognized my deer-caught-in-the-headlights-look and held secret meetings with a view to intervening. One offered me a place to stay, since I had given up my apartment. Several years later, we were married.

There are bars like this all over North America. They're the places that serve as the subject of fondly considered memoirs, such as J.R. Moehringer's The Tender Bar; the places romanticized by authors like Pete Hamill and Jack London and Walt Whitman. They're the bars cherished by sociologist Ray Oldenburg, who has shown that the neighborhood tavern is an invaluable place where the community unwinds from the stresses of daily life and people bond with others they would otherwise never meet.

When the Eastern seaboard went dark at 4:11 p.m. on August 14, 2003, Kilgours' was crammed by five. Many of us simply headed there as though on some homing device. Kilgours' had also been packed two years earlier, on 9/11. We filtered in and out, looking for answers about friends who worked in lower Manhattan. We speculated about our own safety and whether this was the beginning of a new era and whether or not anything would ever be the same again. We were there to reach out to fellow humans after watching an unfathomable tragedy unfold in live time.

There are countless other bars about which similar stories can be told – and they reach down into our shared history and reflect it. Americans have always walked into a bar: It is where the freedom to associate has been traditionally exercised.

As I hope to show in this book, the bar has been one of places in which America and Americans have struggled for self-definition, establishing the rights of its citizens to express themselves and effect change and to do so in groups. Freedom of association gave rise to the countless progressive movements that, over the years, have been implemented there—from the founding fathers and original revolutionary leaders to the Jeffersonian political reformers who battled to keep the new American democratic experiment honest after independence. From labor leaders and social reformers who denounced monopolies and the exploitation of a seemingly endless supply of immigrant labor throughout the nineteenth century to the early organization of middle class communities in disenfranchised populations like segregated black Americans living under Jim Crow laws. And more recently, from those who rose up against the systemic discrimination against lesbian and gay communities to the feminists who struggled for social change and demanded to be let into the bar – which was, at the time, effectively the board room of American business. This is not to say that everything begun in bars have been rights-expanding and noble. The Nazi party organized in beer halls and, here in America, corrupt machine politics were maintained through a system of saloons for nearly a century. Lincoln's assassination was planned in a tavern.

Bars are where people gather and talk. And drink. And alcohol leads to more talking, more drinking and, under certain circumstances, a heightened level of outrage and commitment to action. Since its early beginnings as a humble one-room tavern with a simple wood bench for visitors, the bar served as an extension of the town hall – an American innovation and its earliest great contribution to democracy- At times, it was the town hall. Going at least as far back as the early eighteenth century, when a clutch of Boston rebels began agitating in smoke-filled taverns, groups denied access to legitimate and sanctioned forms of political representation have taken to the saloon.

In an age when everything from tapioca to quilting has been touted as an overlooked agent that has helped shape history, it's tempting to soft-sell the importance of the American bar. Like its close cousins, the coffee-houses of Paris and London, however, the bar was where the public proved itself – often with less sobriety – capable of economic and political self-determination.

It may be hard imagining bars as serving the same critical function in this age, when we frequent them to enjoy relatively bourgeois pursuits – sampling haute-cocktail creations at the spate of New York bars like Milk and Honey, Angel's Share, PDT and Death & Co.. It's tasty and fun and can't help but seem a little frivolous compared with the Sons of Liberty meetings, Democratic-Republican insurrections, Anarchist bomb plots, labor movements, feminist sit-ins and the events leading up to Stonewall, the cornerstone for the gay revolution.

Yet America still struggles with the public space that is the bar. In 2006, for example, when the Katrina Hurricane Relief Bill was passed, a rider was attached, spearheaded by Congressman Frank Wolf, which excluded bars from applying for aid or tax breaks on the grounds that they contributed nothing to the community. Many in New Orleans will tell you the opposite was true, especially those who sought refuge in bars during and after the hurricane. In New York and other urban areas across the country, an aging and gentrifying population repeatedly clashes with bar clientele over a number of issues, including the noise, brawls and vomit that will sometimes spill from these fun houses. The struggle manifests itself in court-induced closures and polarizing neighborhood battles over issues such as babies in bars , sexual assaults and proximity to places of worship.

No doubt that there are legitimate concerns over the competing needs of urban dwellers – between those who still feel bars poison those who can't help themselves and those who value them as spaces where grassroots programs are nourished. When I first stumbled on a few seemingly disparate events that spilled out of a bar, tavern or saloon – the Revolution, the Shay's Rebellion, labor movements, Anarchism, – I decided to embark on a pub crawl through American history. Early research uncovered no end to these seemingly disconnected events becoming associated. It almost seemed as if everything that had ever happened in America had happened in a bar. These events no longer seemed disconnected: the inner logic of the tavern rabble-rousers was, in fact, what produced the early American public sphere. And, after the Revolution, America continued to re-define itself in that same space, be it the country's numerous taverns, saloons, juke joints, grog-shops, blind pigs, speakeasy night clubs and, eventually, post-prohibition bars of all stripes.