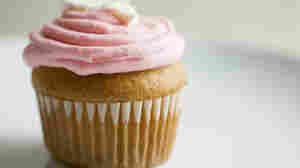 Do not eat this cupcake. iStockphoto.com hide caption

September 18, 2011 • In their new book Willpower, psychologist Roy Baumeister and science writer John Tierney explore the science of self-control. Willpower is a limited resource, they say, but with practice and persistence, you can harness "the greatest human strength."

However you define success — a happy family, good friends, a satisfying career, robust health, financial security, the freedom to pursue your passions — it tends to be accompanied by a couple of qualities. When psychologists isolate the personal qualities that predict "positive outcomes" in life, they consistently find two traits: intelligence and self-control. So far researchers still haven't learned how to permanently increase intelligence. But they have discovered, or at least rediscovered, how to improve self-control.

Hence this book. We think that research into willpower and self control is psychology's best hope for contributing to human welfare. Willpower lets us change ourselves and our society in small and large ways. As Charles Darwin wrote in The Descent of Man, "The highest possible stage in moral culture is when we recognize that we ought to control our thoughts." The Victorian notion of willpower would later fall out of favor, with some twentieth-century psychologists and philosophers doubting it even existed. Baumeister himself started out as something of a skeptic. But then he observed willpower in the laboratory: how it gives people the strength to persevere, how they lose self-control as their willpower is depleted, how this mental energy is fueled by the glucose in the body's bloodstream. He and his collaborators discovered that willpower, like a muscle, becomes fatigued from overuse but can also be strengthened over the long term through exercise. Since Baumeister's experiments first demonstrated the existence of willpower, it has become one of the most intensively studied topics in social science (and those experiments now rank among the most-cited research in psychology). He and colleagues around the world have found that improving willpower is the surest way to a better life.

They've come to realize that most major problems, personal and social, center on failure of self-control: compulsive spending and borrowing, impulsive violence, underachievement in school, procrastination at work, alcohol and drug abuse, unhealthy diet, lack of exercise, chronic anxiety, explosive anger. Poor self-control correlates with just about every kind of individual trauma: losing friends, being fired, getting divorced, winding up in prison. It can cost you the U.S. Open, as Serena Williams's tantrum in 2009 demonstrated; it can destroy your career, as adulterous politicians keep discovering. It contributed to the epidemic of risky loans and investments that devastated the financial system, and to the shaky prospects for so many people who failed (along with their political leaders) to set aside enough money for their old age.

Ask people to name their greatest personal strengths, and they'll often credit themselves with honesty, kindness, humor, creativity, bravery, and other virtues — even modesty. But not self-control. It came in dead last among the virtues being studied by researchers who have surveyed more than one million people around the world. Of the two dozen "character strengths" listed in the researchers' questionnaire, self-control was the one that people were least likely to recognize in themselves. Conversely, when people were asked about their failings, a lack of self-control was at the top of the list.

People feel overwhelmed because there are more temptations than ever. Your body may have dutifully reported to work on time, but your mind can escape at any instant through the click of a mouse or a phone. You can put off any job by checking e-mail or Facebook, surfing gossip sites, or playing a video game. A typical computer user checks out more than three dozen Web sites a day. You can do enough damage in a ten-minute online shopping spree to wreck your budget for the rest of the year. Temptations never cease. We often think of willpower as an extraordinary force to be summoned to deal with emergencies, but that's not what Baumeister and his colleagues found when they recently monitored a group of more than two hundred men and women in central Germany. These Germans wore beepers that went off at random intervals seven times a day, prompting them to report whether they were currently experiencing some sort of desire or had recently felt such a desire. The painstaking study, led by Wilhelm Hofmann, collected more than ten thousand momentary reports from morning until midnight.

Desire turned out to be the norm, not the exception. About half the time, people were feeling some desire at the moment their beepers went off, and another quarter said a desire had just been felt in the past few minutes. Many of these desires were ones they were trying to resist. The researchers concluded that people spend about a quarter of their waking hours resisting desires — at least four hours per day. Put another way, if you tapped four people at any random moment of the day, one of them would be using willpower to resist a desire. And that doesn't even include all the instances in which willpower is exercised, because people use it for other things, too, such as making decisions.

The most commonly resisted desire in the beeper study was the urge to eat, followed by the urge to sleep, and then by the urge for leisure, like taking a break from work by doing a puzzle or game instead of writing a memo. Sexual urges were next on the list of most-resisted desires, a little ahead of urges for other kinds of interactions, like checking e-mail and social-networking sites, surfing the Web, listening to music, or watching television. To ward off temptation, people reported using various strategies. The most popular was to look for a distraction or to undertake a new activity, although sometimes they tried suppressing it directly or simply toughing their way through it. Their success was decidedly mixed. They were pretty good at avoiding sleep, sex, and the urge to spend money, but not so good at resisting the lure of television or the Web, or the general temptation to relax instead of work. On average, when they tried to resist a desire with willpower, they succeeded about half the time.