Wall Street, Washington, and the Education of a President

Draws on hundreds of hours of interviews and in-depth research to relate the complete story of the nation's financial meltdown, from the trading floors of Lower Manhattan to the power corridors inside the Beltway. 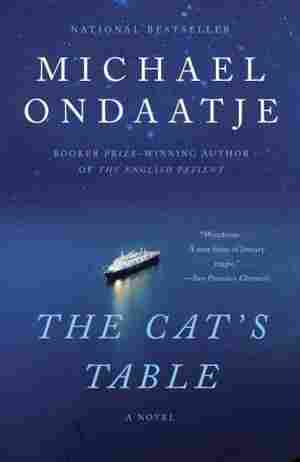 Tales Of Civil Unrest In America, Fillory And Boyhood 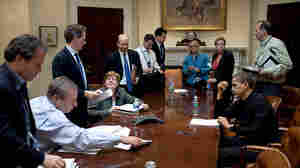 Inside Obama's White House, A Crisis Of 'Confidence'

September 20, 2011 • Pulitzer Prize-winning journalist Ron Suskind talks about his unflattering picture of rivalries and dysfunction within President Obama's first economic team in his book Confidence Men: Wall Street, Washington, and the Education of a President. Some of officials quoted in the book say they were misquoted or that their comments were taken out of context.

President Barack Obama dances lightly down the four marble steps to the Rose Garden and across the flagstones to a waiting lectern. He still glides, elegant and purposeful, in that tall man's short-step — a ballplayer returning to the court after a time-out.

Today, September 17, 2010, he has committed to putting some "points on the board," in the sports parlance of Rahm Emanuel, his chief of staff. The president needs to show the country that he hasn't lost his game, the ineffable con.dence, the surety of stance and delivery that propelled a man with little political experience to scale cosmic heights and to realize what felt, on Election Day, like democracy's version of the moon landing. Through recent history, America has considered itself something of a providential miracle, a country that kept finding reasons to believe in its Manifest Destiny. That faith, sorely tested over the past several decades, found itself restored with dizzying ebullience when Barack Obama and his beautiful family stepped onto the stage in Chicago's Grant Park as America's First Family. It was a sensation of such intensity as to startle many across the country and around the world into believing in the promise of America, the original and long-burning beacon of the democratic ideal.

The legacy of that moment is ever more found in the lengthening shadow it casts. In the nearly two years since, Barack Obama, like an archangel returned to earth, has been forced to walk the flat land and feel its hard contours. What, if anything, it has awakened in him remains unclear — at present, he is clearly struggling to get his bearings. And yet it is impossible to see the president and not search out signs of that man from Grant Park, who strode so boldly across history's confetti-strewn stage. On this warm late-summer afternoon, with Congress out of session, Obama has convened the press to announce the launch of a new agency, the Consumer Financial Protection Bureau. It has been designed to pro­tect American consumers from the predations of the .nancial services and banking industry, which over the past couple of decades has grown vast and insatiable by inventing, for the most part, new ways to market, sell, and invest in debt.

The woman standing awkwardly at Obama's left hip, Harvard Law School professor Elizabeth Warren, has become the nation's town crier on the subject of bankruptcy and debt. In the two years since the economic crisis, she has emerged from nowhere to trumpet the story of how debt was turned into a velvety weapon, how engorged financial firms deceptively packaged it, sold it as securities, and extracted usurious pro.ts from American consumers, especially those in America's once-vaunted middle class. The notion of a consumer financial product agency, a free­standing, independently funded entity like the Federal Communications Commission, was originally hers, unveiled in an article she published in the spring of 2007. The truth is that no one much cared for the idea, until her unheeded concerns turned up at the center of the worst financial meltdown since the Great Depression.

So today is a long-delayed victory for Warren - almost. Somehow nothing in the Rose Garden is quite as it seems. The president praises Warren, whom he says he met at Harvard Law School, as though they are old friends. They're not, and Warren only became a professor at Harvard Law the year after Obama graduated from it. In fact, over the past two years, while Warren has seen herself lionized on magazine covers and in prime-time interviews as a leading voice for tough, restorative reforms, the president seems to have been studiously avoiding her.Part of the problem, clearly, is that she has been acting the way people expected and hoped that man from Grant Park would.

This has caused discomfort not only for the president, but also for his top lieutenants, including the boyish man in the too-long jacket at Obama's right hip, bunched cuffs around his shoes, looking more than anything like a teenager who just grabbed a suit out of his dad's closet. That's Treasury secretary Tim Geithner, looking sheepish. Only those in his inner circle at Treasury, though, can precisely read what's behind that expression: a string of private efforts across the past year to neutralize Warren. The previous fall, Geithner huddled with top aides to develop what one called an "Elizabeth Warren strategy," a plan to engage with the firebrand reformer that would render her politically inert. He never worked out a viable strategy — a way to meet with Warren without drawing undesirable comparisons — and so, like the president, he didn't.

What the Treasury Department did do, unbeknownst to Warren, was embrace demands from the banking industry to create a bureau under the condition that Warren would not be allowed to lead it. But as the financial-reform bill moved to a vote in early summer, industry lobbyists were so aggrieved at the idea of an agency—they felt it unsupportable under any conditions—that they didn't bother to call in their chits on Warren.

In fact, they played it just so. The industry managed to get the proposed agency shrunk into a bureau that would live under the auspices of the Federal Reserve, the government's greatest mixed metaphor of public purpose and private self-regard, representing as it does the dual interests of a sound monetary policy and the health of the banking industry. Beyond that, the bureau's rules can be vetoed by a two-thirds majority of a panel of other financial regulators—an indignity of institutionalized second-guessing known to few other agencies.

But after financial regulatory reform legislation passed in July, the prospect of Warren at the bureau's helm quickly grew into a movement: complete with Internet write-in campaigns, online petitions, flurries of editorials, and even a viral rap video—certainly a first in the history of appointing government regulators. Warren would seem the easiest of choices. Since his earliest days on the campaign trail, Obama had spoken passionately about restoring competent government, and with it competent regulators. With the midterm elections less than two months away, he could have used a con.rmation battle over Warren to draw a much-needed distinction between his ad­ministration and those, mostly Republicans, who dared to side publicly with America's big banks and financial firms. Warren's celebrated ferocity looked tailor-made to revive Obama's vast grassroots campaign network.

Like an encamped army with nothing to do, the foot soldiers of the campaign had fought among themselves a bit, eaten the leftover rations, and then drifted back to private life. Field commanders still in touch with the White House signaled by midsummer that a Warren confirmation battle would rally the troops and, according to one, "at least show what we stand for." On the other side was the financial services industry, which hurled nonspeci.c attacks at Warren, claiming she was arrogant, disrespectful, and power-hungry. It had begun castigating Obama as "antibusiness," a charge the industry asserts would be de.nitively confirmed by the appointment of Warren.

Excerpted from Confidence Men: Wall Street, Washington, and the Education of a President by Ron Suskind. Copyright 2011 by Ron Suskind. Excerpted by permission of Harper. All rights reserved.