Using the history of the Conficker computer worm as a centerpiece, the author discusses the war raging over the Internet, between those who want to exploit it and those who aim to protect it. By the best-selling author of Black Hawk Down. 75,000 first printing. 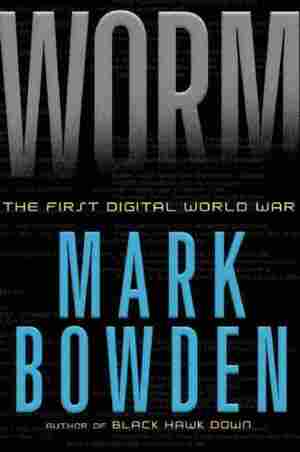 September 27, 2011 • As many as 12 million computers worldwide have been infected with a highly encrypted computer worm called Conficker. Writer Mark Bowden details how Conficker was discovered, how it works, and the ongoing programming battle to bring down Conficker in his book Worm: The First Digital World War.

The new worm in Phil Porras's digital petri dish was announced in the usual way: a line of small black type against a white backdrop on one of his three computer screens, display­ing just the barest of descriptors— time of arrival . . . server type . . . point of origin . . . nineteen columns in all.

It was near the end of the workday for most Californians, November 20, 2008, a cool evening in Menlo Park. Phil took no notice of the newcomer at first. Scores of these digital infections were recorded on his monitor every day, each a simple line on his Daily Infections Log—actually, his "Multi perspective Malware Infection Analysis Page." This was the 137th that day. It had an Internet Protocol (IP) address from Argentina. Spread out across the screen were the infection's vitals, including one column that noted how familiar it was to the dozens of antivirus (AV) companies who ride herd on malicious software (malware). Most were instantly familiar. For instance, the one just above was known to all 33 of the applicable AV vendors. The one before that: 35 out of 36.

This one registered a zero in the recognition column: 0 of 37. This is what caught his eye when he first noticed it on his Log.

Outside it was dark, but as usual Phil was still at his desk in a small second-story office on the grounds of SRI International, a busy hive of labs, hundreds of them, not far from Stanford University. It is a crowded cluster of very plain three-story tan-and-maroon buildings arrayed around small parking lots like rectangular building blocks. There is not a lot of green space. It is a node of condensed brainpower, one of the best-funded centers for applied science in the world, and with about seventeen hundred workers is the second-largest employer in Menlo Park. It began life as the Stanford Research Institute— hence the initials SRI—but it was spun off by the university forty years ago. It's a place where ideas become reality, the birthplace of gizmos like the computer mouse, ultrasound imagery machines, or tiny robot drones. The trappings of Phil's office are simple: a white leather couch, a lamp, and a desk, which is mostly taken up by his array of three computer monitors. On the walls are whiteboards filled with calculations and schematics and several framed photos of vintage World War II fighter planes, vestiges of a boyhood passion for model building. The view out his window, through a few leafy branches, is of an identical building across an enclosed yard. It could be any office in any industrial park in any state in America. But what's remarkable about the view from behind Phil's desk has nothing to do with what's outside his window. It's on those monitors. Spread out in his desktop array of glowing multicolored pixels is a vista of cyberspace equal to . . . say, the state of Texas.

One of the inventions SRI pioneered was the Internet. The research center is a cornerstone of the global phenomenon; it owned one of the first two computers formally linked together in 1969, the first strand of a web that today links billions. This was more than two decades before Al Gore popularized the term "information superhighway." There at the genesis, every computer that connected to the nascent network was assigned its own 32-bit identity number or IP address, represented in four octets of ones and zeros. Today the sheer size of the Internet has necessitated a new system that uses 128-bit addresses. SRI ceded authority for assigning and keeping track of such things years ago, but it retains ownership of a very large chunk of cyberspace. Phil's portion of it is a relatively modest, nothing-to-brag-about-but-damned-hard-to-get, "slash 16," a block of the original digital universe containing 65,536 unique IP addresses—in other words, the last two octets of its identity number are variable, so that there are two to the sixteenth (216) possible distinct addresses, one for each potential machine added to its network. It gives him what he calls "a large contact surface" on the Internet. He's like a rancher with his boots propped on the rail on the front porch before a wide-open prairie with, as the country song says, miles of lonesome in every direction. It's good for spotting intruders.

Phil's specialty is computer security, or, rather, Internet security, because few computers today are not linked to others. Each is part of a network tied to another larger network that is in turn linked to a still larger one, and so on, forming an intricate invisible web of electrons that today circle the Earth and reach even to the most distant parts of our galaxy (if you count those wayfaring NASA robot vehicles sending back cool snapshots from mankind's farthest reach into space). This web is the singular marvel of the modern age, a kind of global brain, the world at everyone's fingertips. It is a tool so revolutionary that we have just begun to glimpse its potential—for good and for evil.

Out on his virtual front porch, Phil keeps his eyes peeled for trouble. Most of what he sees is routine, the viral annoyances that have bedeviled computer users everywhere for decades, illustrating the principle that any new tool, no matter how helpful, will also be used for harm. Viruses are responsible for such things as the spamming of your in-box with come-ons for penis enlargement or million-dollar investment opportunities in Nigeria. Some malware is designed to damage or destroy your computer, or threaten to do so unless you purchase a remedy (which turns out to be fake). When you get hit, you know it.
But the newest, most sophisticated computer viruses, like the most successful biological viruses, have bigger ambitions, and are designed for stealth. They would be noticed only by the most technically capable and vigilant of geeks. For these, you have to be looking.