Treating a delusional scientist who has been using cloaking technology from an aborted government project to render himself nearly invisible, Austin therapist Victoria Vick listens to his accounts of spying on the private lives of others, a situation with which Victoria becomes obsessed to the point that it threatens her career and marriage.

NPR stories about The Visible Man 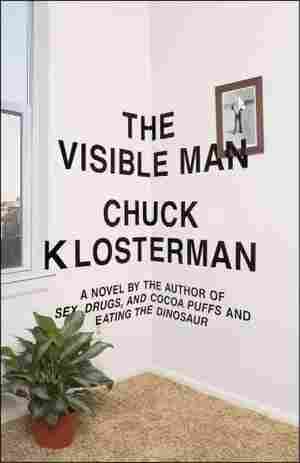 October 4, 2011 • Invisibility is often used for mischief, but in Chuck Klosterman's new novel, his invisible character sits still, looks deeply and disrupts only when necessary. Love him or hate him, Klosterman's stoner-genius extemporizing is unmatched in this sly work of fiction.

Received phone message this a.m. from "Y____," local male, inquiring about scheduling possible session as soon as possible. Message did not elaborate on nature of problem; caller's voice did not express urgency. Returned call in early p.m. Patient initially seemed calm and asked typical questions about rates and availability. Conversation changed when patient aggressively requested that all sessions be conducted over the telephone (and that this requirement was nonnegotiable). After explaining to Y____ that this was not a problem, I casually asked why he was unavailable for conventional face-to-face dialogue. Patient immediately grew agitated and said (something along the lines of), "That isn't your concern." When I mentioned that this information might be central to our future interactions, caller became sarcastic, then abruptly apologetic. Another brief discussion about rates and insurance option followed (Y____ is uninsured). I told him he would need to fill out a few basic forms, but he said, "No forms. I don't fill out forms. I have money. The forms aren't needed." This is unusual, but not unheard of. We discussed our mutual distaste for paperwork. A telephone appointment has been tentatively scheduled for 10:00 a.m. Friday. Call then concluded. Difficult to ascertain if this behavior is a manifestation of shyness, agoraphobia, or drug/alcohol dependency. Skeptical about whether this patient will call again, but leaving the 10:00 a.m. hour open nonetheless.

Sent from my BlackBerry Wireless Handheld

Opened work with Y____ this morning. Received call at 10:00 a.m. sharp. Patient seems bright but capricious; he oscillates between unnecessary levels of aggression and repetitive, contrite apologies. I initiated session with standard entry query [editor's note: this is typically a straightforward question about why the patient has contacted the therapist]. Y____ declined to answer. He suggested I would not be able to understand his reasoning at this time. I agreed to give him that emotional space temporarily. I then asked the following:

FAMILY/MEDICAL HISTORY: declined answer but described self as "healthy"

Discussion throughout session was predictably circular. I was clear with Y____ that therapy would be ineffective if he refused to say why he wanted this process to occur, a suggestion he simultaneously agreed with and balked at. Y____ responded to virtually all questions by asking a similar question of me. He seemed preoccupied with making jokes about whether I physically resembled Lorraine Bracco, the actress who portrayed a psychiatrist on the defunct HBO series The Sopranos. When I responded to his humor in kind (by informing him that some form of this joke was made by virtually all my male patients), he seemed unusually offended and would not acknowledge my immediate apology. At the thirty-five-minute mark, I directed my questioning toward his day-to-day mental state, asking if he ever felt depressed. He immediately said, "Very much," but was unwilling to give any details as to why, always stating and restating the notion that his problems were more "exceptional" (his word) than whatever I might be "anticipating" (his word). When I told him this is a typical feeling among first-time therapy patients, he told an extremely long, unfunny joke about a clown. The premise of the joke is as follows: A little boy is humiliated at the circus. A clown makes sport of him, and the audience laughs. As a result, the boy spends his entire adult life trying to invent the funniest, cleverest comebacks for every kind of social embarrassment. The boy even travels to Tibet (?) to study the ancient art of banter. Years later, the boy (who is now a man) brings his own child to the circus, and — for whatever reason — the same clown is working and attempts to embarrass the man again by spraying him in the face with a bottle of seltzer water. The man has spent years preparing for this very moment. He dries his face with a towel, looks his adversary in the face, and says, "Fuck you, clown." (This, it seems, was the punch line?) Unclear how this joke is connected to his feelings of inadequacy. Session ended immediately after clown story. Y____ agreed to call again next Friday.

If Y____ is dealing with addiction, it seems unlikely that he was intoxicated during our session. His speech and thought patterns seemed unremarkable (although possible use of cocaine is not outside the realm of possibility, as his speech was sometimes rushed). More troubling is his paranoid obsession over the most minor details within his own life, almost to the point of caricature; he has wildly exaggerated the import of his own existence. Keeps using phrases like, "It's different for me. Everything is different for me." Y____ is emotionally overinvested in some undefined, unspoken idea (regarding his own sense of self), and this investment overwhelms all other components of his psyche. A grandiose or somatic disorder seems possible, although more info will be needed before making any strict diagnosis. This will take time. That said, my overall concern is mild. Patient does not appear to be in danger.

Sent from my BlackBerry Wireless Handheld

No progress with Y____. Initial conversation was pleasant (he mentioned how listening to songs by the ex-Beatle George

Harrison had put him in "an effervescent mood"), but real dialogue collapsed soon after. Once again, I tried to direct our conversation toward his motive for seeking therapy. This quickly became a thirty-minute "intellectual cul de sac" (his words). He said he wanted to "see what other people see" but would not elaborate on what this meant. In response to my conventional follow-up ("What do you suspect other people see?"), he laughed and called my elocutionary technique "amateurish," claiming I should "try harder." At this point I informed him that he could seek help elsewhere if that was what he wanted. He then apologized, although not sincerely — he said he was sorry his words had insulted me but refused to apologize for what he actually said. Sensing this interaction was only exasperating our relationship, I returned to the topic of the Harrison album he had mentioned at the start of the session, mostly to get him talking in a nonconfrontational manner. He expressed preoccupation with one song, a track he identified as "Be Here Now." When asked what he liked about the song, Y____ suggested that the song's lyrics illustrated Harrison's guilt about becoming wealthy and the singer's "self-conscious hypocrisy" for choosing to advocate principles of Eastern spirituality while living as a conventional celebrity. He was smug about this analysis. "If he really believed what he sang," said Y____, "he would not have needed to write and record the song at all. It's totally fake. He wrote the song as a means of admitting he can't be the person he pretends." This alleged contradiction amused him. Being unfamiliar with the song, I did not comment. Session ended soon after, closing with another friendly (and most likely meaningless) exchange of pleasantries.

I have purchased "Be Here Now" via the computer application iTunes, initially confusing it with another track of the same name. Though I've listened to the song only twice, the textual interpretation by Y____ strikes me as unusually cynical. He seems to misread the song on purpose. At risk of placing too much emphasis on one tangential aspect of our second encounter, I now have fewer fears about addiction and more concerns about clinical depression and/or a specific break from reality — it seems very possible that Y____ is a highly functioning depressive. Have decided to take a more aggressive stance with Y____ next week.

This is an excerpt from The Visible Man by Chuck Klosterman. Copyright 2011. Reprinted by permission of Simon & Schuster. All rights reserved.