Nine-year-old Tiffany is not like the other girls. Her parents, French colonialists living in Africa in the years leading up to the Algerian War, have sent her back to France alone to live and be schooled at the Convent for Slaughterhouse Ladies. The other girls tease and torment Tiffany for her African origins, her missing mother and for the way she does her hair. Translated by Margot Miller and France Grenaudier-Klijn. 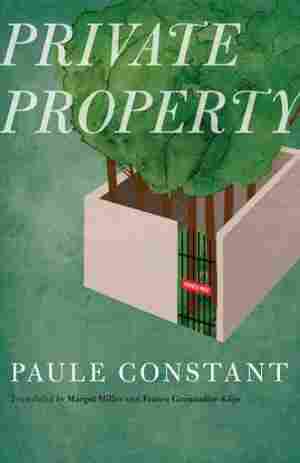 October 9, 2011 • Paule Constant's novel, first published in France in 1981, has finally been translated into English. Nine-year-old Tiffany is alone in the world; her parents, French colonialists living in Africa, have sent her back to France alone to live and be schooled at the aptly named Convent for Slaughterhouse Ladies.

The senior girl was helping Tiffany adjust her celluloid collar. A quick glance at the cuffs, the pleats of the skirt. It seemed alright. They had to hurry now, to catch up with the others. They were running. The refectory was that way, and over here, the bath­rooms. Now they were tearing down the stairs. The infirmary, the laundry, the chapel, the parlor. At the back the classrooms, and at the far end, the gymnasium. Back that way, the kitchens. Here the playground.

In the schoolyard were many boarders already: younger ones, less young ones, older ones, all in navy blue: pleated skirts with collars biting in their whiteness. So many of them! Some walking two by two; solitary ones standing, their backs against the wall; groups forming enclosures so tight that they seemed to fit into each other like puzzle pieces. They were everywhere. Her guide had disappeared. Near the door, a nun was saying her rosary.

Should she interrupt a conversation or a sorrow to interfere where it wasn't her place? Tiffany felt in the way. Beating a retreat, she approached the nun, silently muttering away, hands in her sleeves, each quiver shaking the beads of the Our Father. Tiffany stopped. She watched this pendulum-like mechanism, passionately looking for the replicating gestures. Tap-tap, repeated the sleeve. The tongue was darting over the dry lips, a sigh, the duration of an invocation, and then the nun was lulling herself into the Hail Marys.

The nun opened her arms, the hands emerged from the sleeves, and the rosary appeared, black, shiny. She brought the silver cross to her lips, to her forehead, and in the same movement began to coil up. She was about to close her eyes when she noticed Tiffany, very near, watching her with surprise. She ordered her to go play. Tiffany, who wanted to stay, replied that she didn't know how. The nun told her that she just had to make some friends! Her remark had suspended her gesture, which she now completed in slow motion. She curled up.

Why hadn't they come? Tiffany examined the door, postpon­ing the visit in her mind, thinking there must have been a delay, prepared to wait. It was just a mix-up of the time, a misunder­standing. How long would they let her wait? Her watching, the longer it lasted, would seem inappropriate. To endure the delay, she forced herself to let nothing show, above all not to seem to be waiting. A glance toward the opening door would give her away. She looked from underneath her eyelids, motionless, or, over the comings and goings, to take in a larger space, so as to catch in the whole space the ones who would come.

It seemed to her that if she stayed close to the nun, a little apart, they would find her more easily. She allowed herself this last chance, the door of the schoolyard. The nun opened her eyes and Tiffany moved off. She was going to play. With whom? At what? She had no idea. She would play against herself, outside of herself, breath­less with anguish, beaten with anxiety. She reached the middle of the schoolyard, she was sinking like a stone. In the blue and black wave that was taking her under, she was suffocating, unable to come to the surface.

Approach the others, how? Introduce herself, in what way? Her age, her name, even where she came from corresponded to noth­ing the others could imagine, in short, to nothing real in fact. She didn't belong to these nearby cities or even those far-away ones whose names were known or intimately recognized. She wasn't from Paris; she wasn't from P. She came from ouregano. From where? From ouregano. What did that mean? Names of places had to make sense. Tiffany was from non-sense; she was from no-where.

How could she cast over this past even the vaguest light? How could she choose a first name that was strange to her and the all too familiar nickname, which, in its preciousness, defined those who had given it to her more than it did her? Marie-Françoise or Tiffany?1 What part of herself should she reveal? Nothing or nothingness? Which one? There was no way around it, though, and it would reduce everything to a time she understood no better than the time of day. Time belonged to an abstract order that did not concern her. It was six in the morning or six in the evening. Either way she was nine years old.

They didn't even let her finish saying her full name. What did yet another Marie-Françoise matter here? As for her age, if she proclaimed it like that, she'd be showing off, saying she was ahead of the others. So what. What did it matter to them that she was ahead . . . And Africa, Ougouga, how do you say it? Ougou­gou, La-di-dah! They made fun of her with big guffaws: You're a Negro! Tiffany protested: she was not a Negro. To her ears, this word resonated crudely, almost insultingly. Back there, no one said Negroes. They said: Blacks, Africans, whatever, but not Negroes. Even the colonists who put on the bar ebony busts, with pointed breasts and thick lips, didn't say Negroes, or said it under their breath.

Since the girl had felt her slur hit the mark, she pointed at Tiffany: She's a Negro, she's a Negro! Tiffany turned away, asking here or there, the closest girl: What is your name? A little blonde girl tossed out a Jacqueline something-or-other. The others jealously guarded their anonymity. Mind your own business! Tiffany no longer saw them. What she had said was pointless, and it marked her in a different way to the girl who called her a Negro. She uses vous! Tiffany was a Negro who used the vous form, a nine-year-old sixth grader who put on airs! By opening her mouth Tiffany had disturbed an entire culture, organized a resistance, provoked her own hell. Over there, the door remained closed.

This is an excerpt from Private Property by Paule Constant. Copyright 2011. Reprinted by permission of Bison Books. All rights reserved.