Accessibility links
Alone Together NPR coverage of Alone Together: Why We Expect More from Technology and Less from Each Other by Sherry Turkle. News, author interviews, critics' picks and more.

Why We Expect More from Technology and Less from Each Other

In Alone Together, MIT technology and society professor Sherry Turkle explores the power of our new tools and toys to dramatically alter our social lives. It's a nuanced exploration of what we are looking for — and sacrificing — in a world of electronic companions and social networking tools, and an argument that, despite the hand-waving of today's self-described prophets of the future, it will be the next generation who will chart the path between isolation and connectivity.

NPR stories about Alone Together 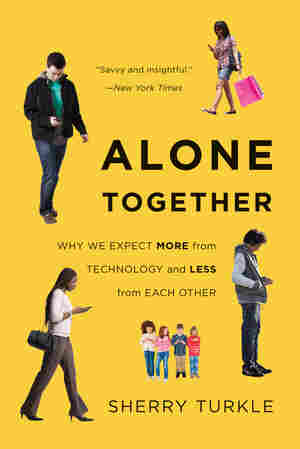 October 17, 2012 • In her book Alone Together, psychologist Sherry Turkle explains how digital devices are affecting our communication and relationships. "What is so seductive about texting, about keeping that phone on, about that little red light on the BlackBerry, is you want to know who wants you," Turkle says.

Technology proposes itself as the architect of our intimacies. These days, it suggests substitutions that put the real on the run. The advertising for Second Life, a virtual world where you get to build an avatar, a house, a family, and a social life, basically says, "Finally, a place to love your body, love your friends, and love your life."1 On Second Life, a lot of people, as represented by their avatars, are richer than they are in first life and a lot younger, thinner, and better dressed. And we are smitten with the idea of sociable robots, which most people first meet in the guise of artificial pets. Zhu Zhu pet hamsters, the "it" toy of the 2009–2010 holiday season, are presented as "better" than any real pet could be. We are told they are lovable and responsive, don't require cleanup, and will never die.

Technology is seductive when what it offers meets our human vulnerabilities. And as it turns out, we are very vulnerable indeed. We are lonely but fearful of intimacy. Digital connections and the sociable robot may offer the illusion of companionship without the demands of friendship. Our networked life allows us to hide from each other, even as we are tethered to each other. We'd rather text than talk. A simple story makes this last point, told in her own words by a harried mother in her late forties:

I needed to find a new nanny. When I interview nannies, I like to go to where they live, so that I can see them in their environment, not just in mine. So, I made an appointment to interview Ronnie, who had applied for the job. I show up at her apartment and her housemate answers the door. She is a young woman, around twenty-one, texting on her Black-Berry. Her thumbs are bandaged. I look at them, pained at the tiny thumb splints, and I try to be sympathetic. "That must hurt." But she just shrugs. She explains that she is still able to text. I tell her I am here to speak with Ronnie; this is her job interview. Could she please knock on Ronnie's bedroom door? The girl with the bandaged thumbs looks surprised. "Oh no," she says, "I would never do that. That would be intrusive. I'll text her." And so she sent a text message to Ronnie, no more than fifteen feet away.

This book, which completes a trilogy on computers and people, asks how we got to this place and whether we are content to be here.

In The Second Self, I traced the subjective side of personal computers — not what computers do for us but what they do to us, to our ways of thinking about ourselves, our relationships, our sense of being human. From the start, people used interactive and reactive computers to reflect on the self and think about the difference between machines and people. Were intelligent machines alive? If not, why not? In my studies I found that children were most likely to see this new category of object, the computational object, as "sort of" alive — a story that has continued to evolve. In Life on the Screen, my focus shifted from how people see computers to how they forge new identities in online spaces. In Alone Together, I show how technology has taken both of these stories to a new level.

Computers no longer wait for humans to project meaning onto them. Now, sociable robots meet our gaze, speak to us, and learn to recognize us. They ask us to take care of them; in response, we imagine that they might care for us in return. Indeed, among the most talked about robotic designs are in the area of care and companionship. In summer 2010, there are enthusiastic reports in the New York Times and the Wall Street Journal on robotic teachers, companions, and therapists. And Microsoft demonstrates a virtual human, Milo, that recognizes the people it interacts with and whose personality is sculpted by them. Tellingly, in the video that introduces Milo to the public, a young man begins by playing games with Milo in a virtual garden; by the end of the demonstration, things have heated up — he confides in Milo after being told off by his parents.2

We are challenged to ask what such things augur. Some people are looking for robots to clean rugs and help with the laundry. Others hope for a mechanical bride. As sociable robots propose themselves as substitutes for people, new networked devices offer us machine-mediated relationships with each other, another kind of substitution. We romance the robot and become inseparable from our smartphones. As this happens, we remake ourselves and our relationships with each other through our new intimacy with machines. People talk about Web access on their BlackBerries as "the place for hope" in life, the place where loneliness can be defeated. A woman in her late sixties describes her new iPhone: "It's like having a little Times Square in my pocketbook. All lights. All the people I could meet." People are lonely. The network is seductive. But if we are always on, we may deny ourselves the rewards of solitude.

In late November 2005, I took my daughter Rebecca, then fourteen, to the Darwin exhibition at the American Museum of Natural History in New York. From the moment you step into the museum and come face-to-face with a full-size dinosaur, you become part of a celebration of life on Earth, what Darwin called "endless forms most beautiful." Millions upon millions of now lifeless specimensrepresent nature's invention in every corner of the globe. There could be no better venue for documenting Darwin's life and thought and his theory of evolution by natural selection, the central truth that underpins contemporary biology. The exhibition aimed to please and, a bit defensively in these days of attacks on the theory of evolution, wanted to convince.

At the exhibit's entrance were two giant tortoises from the Galápagos Islands, the best-known inhabitants of the archipelago where Darwin did his most famous investigations. The museum had been advertising these tortoises as wonders, curiosities, and marvels. Here, among the plastic models at the museum, was the life that Darwin saw more than a century and a half ago. One tortoise was hidden from view; the other rested in its cage, utterly still. Rebecca inspected the visible tortoise thoughtfully for a while and then said matter-of-factly, "They could have used a robot." I was taken aback and asked what she meant. She said she thought it was a shame to bring the turtle all this way from its island home in the Pacific, when it was just going to sit there in the museum, motionless, doing nothing. Rebecca was both concerned for the imprisoned turtle and unmoved by its authenticity.

It was Thanksgiving weekend. The line was long, the crowd frozen in place. I began to talk with some of the other parents and children. My question — "Do you care that the turtle is alive?" — was a welcome diversion from the boredom of the wait. A ten-year-old girl told me that she would prefer a robot turtle because aliveness comes with aesthetic inconvenience: "Its water looks dirty. Gross." More usually, votes for the robots echoed my daughter's sentiment that in this setting, aliveness didn't seem worth the trouble. A twelve-year-old girl was adamant: "For what the turtles do, you didn't have to have the live ones." Her father looked at her, mystified: "But the point is that they are real. That's

The Darwin exhibition put authenticity front and center: on display were the actual magnifying glass that Darwin used in his travels, the very notebook in which he wrote the famous sentences that first described his theory of evolution. Yet, in the children's reactions to the inert but alive Galápagos tortoise, the idea of the original had no place. What I heard in the museum reminded me of Rebecca's reaction as a seven-year-old during a boat ride in the postcard-blue Mediterranean. Already an expert in the world of simulated fish tanks, she saw something in the water, pointed to it excitedly, and said, "Look, Mommy, a jellyfish! It looks so realistic!" When I told this story to a vice president at the Disney Corporation, he said he was not surprised. When Animal Kingdom opened in Orlando, populated by "real" — that is, biological — animals, its first visitors complained that they were not as "realistic" as the animatronic creatures in other parts of Disneyworld. The robotic crocodiles slapped their tails and rolled their eyes — in sum, they displayed archetypal "crocodile" behavior. The biological crocodiles, like the Galápagos tortoises, pretty much kept to themselves.

I believe that in our culture of simulation, the notion of authenticity is for us what sex was for the Victorians — threat and obsession, taboo and fascination. I have lived with this idea for many years; yet, at the museum, I found the children's position strangely unsettling. For them, in this context, aliveness seemed to have no intrinsic value. Rather, it is useful only if needed for a specific purpose. Darwin's endless forms so beautiful were no longer sufficient unto themselves. I asked the children a further question: "If you put a robot instead of a living turtle in the exhibit, do you think people should be told that the turtle is not alive?" Not really, said many children. Data on aliveness can be shared on a "need-to-know basis" — for a purpose. But what are the purposes of living things?

From Alone Together: Why We Expect More from Technology and Less from Each Other by Sherry Turkle. Copyright 2011 by Sherry Turkle. Excerpted with permission of Basic Books, a member of The Perseus Books Group.