Accessibility links
Brandwashed NPR coverage of Brandwashed: Tricks Companies Use to Manipulate Our Minds and Persuade Us to Buy by Martin Lindstrom and Morgan Spurlock. News, author interviews, critics' picks and more. 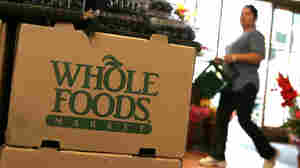 October 23, 2011 • Did you really think the apples you lifted out of a wooden crate at a grocery store came from a local farm? Think again. As Martin Lindstrom explains in his new book, Brandwashed, companies use many tricks to manipulate our minds and persuade us to buy.

When I was very young, my parents loved the sound of bossa nova. Stan Getz. Astrud Gilberto. "The Girl from Ipanema," "Corcovado," "So Danco Samba," and all the others. There was one long, dreary winter when they played bossa nova practically nonstop. So I suppose it's little wonder I grew up to be completely in love with its sound (as I still am today).

Only thing is, my mother was seven months pregnant with me that winter.

Scientists have known for years that maternal speech is audible in utero; in other words, a fetus can actually hear the mother's voice from inside the womb. But more recent research has found that a developing fetus can hear a far broader range of tones that come from outside the mother's body as well. It used to be assumed that the mother's internal bodily sounds (the beat of the heart, the swooshing of the amniotic ﬂuid) drowned out all external noises — like music. But studies reveal this isn't quite true; in fact, not only can soon-to- be babies hear music from inside the womb, but the music they hear leaves a powerful and lasting impression that can actually shape their adult tastes. Says Minna Huotilainen, a research fellow at the Collegium for Advanced Studies, University of Helsinki, Finland, "Music is very powerful in producing fetal memories. When the mother frequently listens to music, the fetus will learn to recognize and prefer that same music compared to other music." What's more, she adds, "The fetus will build the same musical taste with his/her mother automatically, since all the hormones of the mother are shared by the fetus." I guess that may explain why I still have so many bossa nova CDs in my collection. And on my iPod.

In and of itself, this seems pretty harmless, even kind of sweet.

After all, who wouldn't feel a little warm and fuzzy inside knowing that their adult love of the Beatles or Norah Jones may be rooted in the fact that Mom listened to Abbey Road and "Don't Know Why" over and over while she was pregnant? But when you think about how many tunes, sounds, and jingles are linked to brands and products, this all starts to seem a whole lot more sinister. And there is indeed evidence to indicate that hearing tunes and jingles in the womb favorably dis­poses us to those jingles — and possibly the brands with which they are associated — later on.

In one study, Professor Peter Hepper of the Queen's University, Belfast, found that newborn babies will actually show a preference for a TV theme song (the more basic and repetitive the better) that was heard frequently by their mothers during their pregnancies. When newborns — just two to four days old — whose mothers had watched the long- running Australian TV soap opera Neighbours during preg­nancy were played that show's theme song, they became more alert and less agitated, stopped squirming, and had a decreased heart rate — signs that they were orienting well to their environment. And it wasn't just because music in general has soothing qualities; as Hepper reported, those same infants "showed no such reaction to other, unfamiliar tunes."

How can we explain this striking ﬁnding? Says another globally rec­ognized fetal researcher, who chooses to remain anonymous, "While it is very difﬁcult to test newborn babies, and the studies to date have been done on small numbers of children, it is possible that fetuses could develop a response to sounds heard repeatedly while they were in the womb, especially if those sounds were associated with a change in the mother's emotional state. So if, for example, the mother heard a catchy jingle every day while pregnant and the mother had a pleasant or relaxing response to the jingle, the fetus, and later the newborn, could have a conditioned response to that sound pattern and attend to it differently than other unfamiliar sounds." In other words, the minute we're born, we may already be biologically programmed to like the sounds and music we were exposed to in utero.

Shrewd marketers have begun to cook up all kinds of ways to capitalize on this. For one, a few years ago, a major Asian shopping mall chain realized that since pregnant mothers spent a great deal of time shopping, the potential for "priming" these women was signiﬁcant. Pregnancy, after all, is among the most primal, emotional periods in women's lives. Between the hormonal changes and the nervous anticipation of bringing another life into the world, it's also one of the times when women are most vulnerable to suggestion. So the shopping mall chain began experimenting with the unconscious power of smells and sounds. First, it began spraying Johnson & Johnson's baby powder in every area of the mall where clothing was sold. Then it infused the fragrance of cherry across areas of the mall where one could buy food and beverages. Then it started playing soothing music from the era when these women were born (in order to evoke positive memo­ries from their own childhoods, a popular tactic you'll read more about later on).