The essays in Pulphead — written for GQ, The Paris Review, and other magazines — range in subject from Axl Rose to the Southern Agrarian novelist Andrew Nelson Lytle. 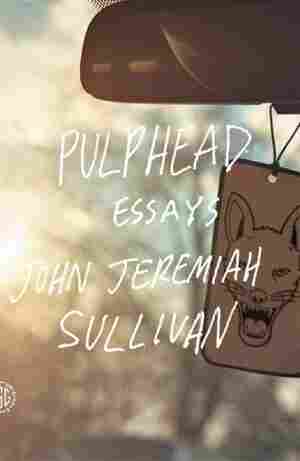 In 'Pulphead' Essays, Curiosity Is The Common Thread

October 26, 2011 • The essays range in subject from Axl Rose to the Southern Agrarian novelist Andrew Nelson Lytle. What they have in common is John Jeremiah Sullivan's essential curiosity about the world, his eye for the perfect detail, and his great good humor in revealing both his subjects' and his own foibles.

It is wrong to boast, but in the beginning, my plan was perfect. I was assigned to cover the Cross-Over Festival in Lake of the Ozarks, Missouri, three days of the top Christian bands and their backers at some isolated Midwestern fairground. I'd stand at the edge of the crowd and take notes on the scene, chat up the occasional audience member ("What's harder — homeschooling or regular schooling?"), then flash my pass to get backstage, where I'd rap with the artists themselves. The singer could feed me his bit about how all music glorifies Him, when it's performed with a loving spirit, and I'd jot down every tenth word, inwardly smiling. Later that night I might sneak some hooch in my rental car and invite myself to lie with a prayer group by their fire, for the fellowship of it. Fly home, stir in statistics. Paycheck.

But as my breakfast-time mantra says, I am a professional. And they don't give out awards for that sort of toe-tap foolishness. I wanted to know what these people are, who claim to love this music, who drive hundreds of miles, traversing states, to hear it live. Then it came, my epiphany: I would go with them. Or rather, they would come with me. I would rent a van, a plush one, and we would travel there together, I and three or four hard-core buffs, all the way from the East Coast to the implausibly named Lake of the Ozarks. We'd talk through the night, they'd proselytize at me, and I'd keep my little tape machine working all the while. Somehow I knew we'd grow to like and pity one another. What a story that would make — for future generations.

The only remaining question was: How to recruit the willing? But it was hardly even a question, because everyone knows that damaged types who are down for whatever's clever gather in "chat rooms" every night. And among the Jesusy, there's plenty who are super f'd up. He preferred it that way, evidently.

So I published my invitation, anonymously, at youthontherock.com, and on two Internet forums devoted to the good-looking Christian pop-punk band Relient K, which had been booked to appear at Cross-Over. I pictured that guy or girl out there who'd been dreaming in an attic room of seeing, with his or her own eyes, the men of Relient K perform their song "Gibberish" from Two Lefts Don't Make a Right ... But Three Do. How could he or she get there, though? Gas prices won't drop, and Relient K never plays north Florida. Please, Lord, make it happen. Suddenly, here my posting came, like a great light. We could help each other. "I'm looking for a few serious fans of Christian rock to ride to the festival with me," I wrote. "Male/female doesn't matter, though you shouldn't be older than, say, 28, since I'm looking at this primarily as a youth phenomenon."

They seem like harmless words. Turns out, though, I had failed to grasp how "youth" the phenomenon is. Most of the people hanging out in these chat rooms were teens, and I don't mean nineteen, either, I mean fourteen. Some of them, I was about to learn, were mere tweens. I had just traipsed out onto the World Wide Web and asked a bunch of twelve-year-old Christians if they wanted to come for a ride in my van.

It wasn't long before the children rounded on me. "Nice job cutting off your email address," wrote "mathgeek29," in a tone that seemed not at all Christlike. "I doubt if anybody would give a full set of contact information to some complete stranger on the Internet ... Aren't there any Christian teens in Manhattan who would be willing to do this?"

A few of the youths were indeed credulous. "Riathamus" said, "i am 14 and live in indiana plus my parents might not let me considering it is a stranger over the Internet. but that would really be awsome." A girl by the name of "LilLoser" even tried to be a friend:

I doubt my parents would allow their baby girl to go with some guy they don't and I don't know except through email, especially for the amount of time you're asking and like driving around everywhere with ya ... I'm not saying you're a creepy petifile, lol, but i just don't think you'll get too many people interested ... cuz like i said, it spells out "creepy" ... but hey — good luck to you in your questy missiony thing. lol.

The luck that she wished me I sought in vain. The Christians stopped chatting with me and started chatting among themselves, warning one another about me. Finally one poster on the official Relient K site hissed at the others to stay away from my scheme, as I was in all likelihood "a 40 year old kidnapper." Soon I logged on and found that the moderators of the site had removed my post and its lengthening thread of accusations altogether, offering no explanation. Doubtless at that moment they were faxing alerts to a network of moms. I recoiled in dread. I called my lawyer, in Boston, who told me to "stop using computers" (his plural).

In the end, the experience inspired in me a distaste for the whole Cross-Over Festival as a subject, and I resolved to refuse the assignment. I withdrew.

The problem with a flash mag like the Gentlemen's Quarterly is that there's always some overachieving assistant editor, sometimes called Greg, whom the world hasn't beaten down yet, and who, when you phone him, out of courtesy, just to let him know that "the Cross-Over thing fell through" and that you'll be in touch when you "figure out what to do next," hops on that mystical boon the Internet and finds out that the festival you were planning to attend was in fact not "the biggest one in the country," as you'd alleged. The biggest one in the country — indeed, in Christendom — is the Creation Festival, inaugurated in 1979, a veritable Godstock. And it happens not in Missouri but in ruralmost Pennsylvania, in a green valley, on a farm called Agape. This festival did not end a month ago; it starts the day after tomorrow. Already they are assembling, many tens of thousands strong. Good luck to you in your questy missiony thing.