by Jon Roberts and Evan Wright

The featured drug smuggler from Cocaine Cowboys chronicles his life, providing coverage of such topics as his work in a Vietnam assassination squad, his creation of sophisticated smuggling technologies and his clandestine alliance with the U.S. government. 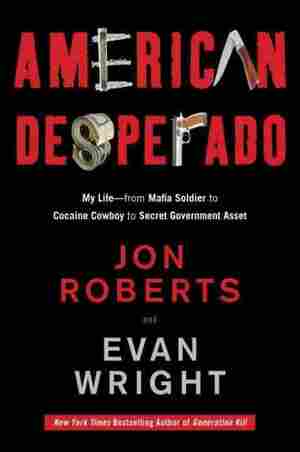 October 30, 2011 • Jon Roberts is the man considered most responsible for bringing cocaine into the US during the 1970s and '80s through the Medellin drug cartel. In American Desperado, a book he co-wrote with journalist Evan Wright, he tells all, from working in the Mafia in New York City to smuggling drugs in Miami.


Evan Wright (E.W.): During a break in the Heat versus Pistons game at Miami's American Airlines Arena, an announcer informs the crowd that a "very special celebrity" is in the house. "Ladies and gentlemen, we have Jon Roberts, Miami's original cocaine cowboy, with us tonight."

Live images of Roberts seated in the arena splash onto the screens in the arena: a physically fifty sixty-year-old with silver hair combed straight back. Unaware that he is being filmed, Roberts gazes expressionlessly. Deep-set eyes give his face a wolfish, predatory appearance. Fans seated near him stand with their camera-phones and take aim. Roberts notices his image on the screens and offers a pained okay-you-got-me grin. He puts his arm on his eight-year- old son, Julian, seated beside him. Julian ducks his head into his father's shoulder but peeks up, grinning, as cameras flash. His dad is the biggest star in the arena.

Little more than fifteen years earlier Roberts was a fugitive. His face was featured on FBI most-wanted posters at U.S. post offices across North America. He fled Miami after the U.S. government labeled him as top "American representative" of the Medellín Drug Cartel and charged him with overseeing the importation of billions of dollars of cocaine. Roberts and a small band of American partners had created a veritable FedEx of drug smuggling. They employed secret airfields, listening posts to eavesdrop on Coast Guard communications, and sophisticated homing beacons for tracking cocaine shipped by sea that stymied the U.S. government for nearly a decade. That part of Roberts's story — and the outrageous life he led that epitomized the excesses of Miami's cocaine- fueled boom of the 1980s — was told in the underground hit documentary Cocaine Cowboys, released in 2006.

Key aspects of Roberts's extraordinary criminal life remained untold — his rise in a powerful New York Mafia clan, the murders that prompted his exile to Miami, his involvement with a CIA official that led to a secret plea deal with the government.

Through it all, he possessed an asset not typical of admitted killers: charm. A man who did business with Roberts in his New York Mafia days — and later joined the priesthood as a result of the experience — told me, "Jon was extremely likable. He was fun to be around. Underneath that was a person capable of very bad things. He is an extreme dichotomy of good and bad. He is a very old story, Dr. Jekyll and Mr. Hyde."

Roberts's frankness about himself — usually blended with a sly, sardonic humor — can be disarming. In a phone call before we met to discuss telling his full story, he said, "I might be a sociopath. Most of the time I've been on this earth I've had no regard for human life. That's been the key to my success."

I arrive in South Florida the spring of 2008 to begin interviewing Roberts for this book. He insists that I stay with him and his wife, Noemi, and son, Julian, at their house in Hollywood, Florida. He insists that I not rent a car. He'll pick me up. He'll drive, always. "I don't ever want to be in a car with somebody else driving it," he explains.

Jon's accent is New York, but not the tough-guy dialect of the streets. He speaks an urbane New Yorkese, like Michael Douglas's Gordon Gekko in Wall Street. We do many hours of interviews in Jon's car, visiting old haunts — bars, smugglers' docks, murder scenes — with time out to pick up Julian at school and shuttle him to playdates and hockey practice.

When Julian is in the car, Jon drives at the proper speed and questions him about school, like any other involved parent. When Jon and I are alone in the car, he reverts to old habits. He seems to drive his car, a late-model Cadillac, at only two speeds, 75 mph on surface streets and 110 mph on freeways. As he darts in and out of traffic and squeals out of parking lots, driving with Jon feels like being dropped into a car-chase scene in a 1970s movie. I glimpse the rearview mirror, expecting to see elaborate car crashes in our wake and flashing red lights. But Jon is a precise high-speed driver, never reckless. Rocketing toward a parking space, he flicks the wheel with one hand and backs in. He always parks his car facing out, primed for a quick getaway.

Jon's home is an expansive Spanish modern, set against a lake on the Inland Waterway. Before we enter, he clips blossoms from a jasmine vine, then places them in a vase in the front hall. A friend from his New York days tells me that Jon has always liked flowers. "In his apartments he always had a bowl of water with a gardenia blossom floating in it."

Jon's hospitality is obsessive. Before my arrival he phoned me on a morning when I happened to be eating blueberries. Now a fresh basket of blueberries waits for me in the refrigerator. Every time I visit there will be blueberries.

In the Roberts household, Jon does the cooking — French toast for breakfast, pasta and baked fish for dinner. Unless there is an NBA game on, or a new episode of Two and a Half Men — his favorite show — meals are eaten at the long, plank- wood dining table. Noemi is responsible for setting it.

She is an energetic presence, thirty years younger than he. Noemi is African on her father's side and Hungarian on her mother's. She and Jon met shortly after she arrived in America, when she was training in a Miami park for a triathlon. There is an athletic bounce to her movements, and she speaks in an exuberant, bubbling accent — not always easily understood. She pulls me aside before my first dinner in the house and says, "I adore Jon. But the day I met him, he touched me and my body went numb, because his energy is black. Jon is not human. I love him, but I live as his prisoner. I cannot leave him because his evil is magnetic."

Jon's older sister, Judy, who lives nearby, is a frequent dinner guest. A graduate of Emerson College, Judy was a personnel director at a large New York company while Jon pursued his criminal career. After the birth of Julian (by Jon's previous wife), Judy moved to Florida to help raise him. In her mid-sixties, Judy is slim and stylish. At the dinner table she speaks in a calming voice, directed at Julian when he mumbles about his schoolwork, then at Jon when he shouts at Julian for mumbling. "Let him speak in his own voice, Jon," she scolds.

Jon shakes his head and sighs, surrendering to his sister.

Julian smiles. You get the idea that agitating Jon is something he likes.

After dinner Jon and Julian shoot hoops in the driveway. When Julian runs for a layup, Jon grabs him and swings him in the air, closer to the rim. Julian makes the shot, and Jon releases him. Jon says, "He's a monster. He beats kids twice his size."