Portrait Of A Woman

The Pulitzer Prize-winning biographer of Peter the Great presents a reconstruction of the 18th century empress's life that covers such topics as her efforts to engage Russia in the cultural life of Europe, her creation of the Hermitage art collection and her numerous scandal-free romantic affairs.

NPR stories about Catherine The Great 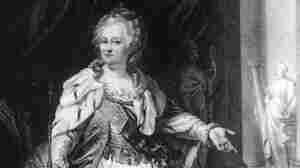 Catherine The Great: Empress of Russia Catherine II championed the ideas of the Enlightenment during her 34-year reign. Hulton Archive/Getty Images hide caption

November 5, 2011 • Biographer Robert Massie explains how Catherine II read books to escape the misery of her unhappy marriage. When she became empress in 1762, she championed the ideals of the French Enlightenment during her 34-year reign over Russia.

Excerpt: 'Catherine The Great: Portrait Of A Woman'

Prince Christian Augustus of Anhalt-Zerbst was hardly distinguishable in the swarm of obscure, penurious noblemen who cluttered the landscape and society of politically fragmented eighteenth-century Germany. Possessed neither of exceptional virtues nor alarming vices, Prince Christian exhibited the solid virtues of his Junker lineage: a stern sense of order, discipline, integrity, thrift, and piety, along with an unshakable lack of interest in gossip, intrigue, literature, and the wider world in general. Born in 1690, he had made a career as a professional soldier in the army of King Frederick William of Prussia. His military service in campaigns against Sweden, France, and Austria was meticulously conscientious, but his exploits on the battlefield were unremarkable, and nothing occurred either to accelerate or retard his career. When peace came, the king, who was once heard to refer to his loyal officer as "that idiot, Zerbst," gave him command of an infantry regiment garrisoning the port of Stettin, recently acquired from Sweden, on the Baltic coast of Pomerania. There, in 1727, Prince Christian, still a bachelor at thirty-seven, bowed to the pleas of his family and set himself to produce an heir. Wearing his best blue uniform and his shining ceremonial sword, he married fifteen-year-old Princess Johanna Elizabeth of Holstein-Gottorp, whom he scarcely knew. His family, which had arranged the match with hers, was giddy with delight; not only did the line of Anhalt-Zerbst seem assured, but Johanna's family stood a rung above them on the ladder of rank.

It was a poor match. There were the problems of difference in age; pairing an adolescent girl with a man in middle age usually stems from a confusion of motives and expectations. When Johanna, of a good family with little money, reached adolescence and her parents, without consulting her, arranged a match to a respectable man almost three times her age, Johanna could only consent. Even more unpromising, the characters and temperaments of the two were almost entirely opposite. Christian Augustus was simple, honest, ponderous, reclusive, and thrifty; Johanna Elizabeth was complicated, vivacious, pleasure-loving, and extravagant. She was considered beautiful, and with arched eyebrows, fair, curly hair, charm, and an exuberant eagerness to please, she attracted people easily. In company, she felt a need to captivate, but as she grew older, she tried too hard. In time, other flaws appeared. Too much gay talk revealed her as shallow; when she was thwarted, her charm soured to irritability and her quick temper suddenly exploded. Underlying this behavior, and Johanna had known this from the beginning, was the fact that her marriage had been a terrible-and was now an inescapable-mistake.

Confirmation first came when she saw the house in Stettin to which her new husband brought her. Johanna had spent her youth in unusually elegant surroundings. Because she was one of twelve children in a family that formed a minor branch of the ducal Holsteins, her father, the Lutheran bishop of Lübeck, had passed her along for upbringing to her godmother, the childless Duchess of Brunswick. Here, in the most sumptuously magnificent court in north Germany, she had become accustomed to a life of beautiful clothes, sophisticated company, balls, operas, concerts, fireworks, hunting parties, and constant, tittering gossip.

Her new husband, Christian Augustus, a career officer existing on his meager army pay, could provide none of this. The best he could manage was a modest gray stone house on a cobbled street constantly swept by wind and rain. The walled fortress town of Stettin, overlooking a bleak northern sea and dominated by a rigid military atmosphere, was not a place where gaiety, graciousness, or any of the social refinements could flourish. Garrison wives led dull lives; the lives of the wives of the town were duller still. And here, a lively young woman, fresh from the luxury and distractions of the court of Brunswick, was asked to exist on a tiny income with a puritanical husband who was devoted to soldiering, addicted to rigid economy, equipped to give orders but not to converse, and eager to see his wife succeed in the enterprise for which he had married her: the bearing of an heir. In this endeavor, Johanna did her best-she was a dutiful if unhappy wife. But always, underneath, she yearned to be free: free of her boring husband, free of their relative penury, free of the narrow, provincial world of Stettin. Always, she was certain that she deserved something better. And then, eighteen months after her marriage, she had a baby.

Johanna, at sixteen, was unprepared for the realities of motherhood. She had dealt with her pregnancy by wrapping herself in dreams: that her children would grow into extensions of herself and that their lives eventually would supply the broad avenue on which she would travel to achieve her own ambitions. In these dreams, she took it for granted that the baby she was carrying-her firstborn-would be a son, an heir for his father, but more important a handsome and exceptional boy whose brilliant career she would guide and ultimately share.

At 2:30 a.m. on April 21, 1729, in the chill, gray atmosphere of a Baltic dawn, Johanna's child was born. Alas, the little person was a daughter. Johanna and a more accepting Christian Augustus managed to give the baby a name, Sophia Augusta Fredericka, but from the beginning, Johanna could not find or express any maternal feeling. She did not nurse or caress her little daughter; she spent no time watching over her cradle or holding her; instead, abruptly, she handed the child over to servants and wet nurses.

One explanation may be that the process of childbirth nearly cost Johanna her life; for nineteen weeks after Sophia was born, the adolescent mother remained confined to her bed. A second is that Johanna was still very young and her own bright ambitions in life were far from fulfilled. But the stark, underlying reason was that her child was a girl, not a boy. Ironically, although she could not know it then, the birth of this daughter was the crowning achievement of Johanna's life. Had the baby been the son she so passionately desired, and had he lived to adulthood, he would have succeeded his father as Prince of Anhalt-Zerbst. Then the history of Russia would have been different and the small niche in history that Johanna Elizabeth earned for herself never would have existed.