Recounts the life and accomplishments of the former Hyundai CEO and the rise of the Republic of Korea to the 13th largest economy in the world.

NPR stories about The Uncharted Path 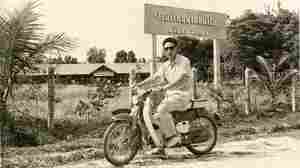 November 15, 2011 • Lee Myung-bak was so poor as a child that he wore his school uniform every day because he had no other clothes. He became a student activist and helped Hyundai become the massive conglomerate it is today. In many ways, Lee's life story — and ultimate success — mirrors that of South Korea. 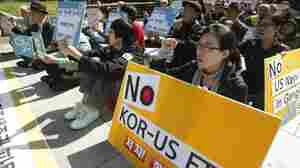 South Korean protesters shout slogans during a rally against a free trade agreement between South Korea and the United States near the U.S. Embassy in Seoul, South Korea, Oct. 11. Ahn Young-joon/AP hide caption

South Korea's Leader Under Pressure Over Trade Deal With U.S.

November 15, 2011 • In an exclusive interview with NPR, South Korea's President Lee Myung-bak speaks about opposition to a free trade agreement with the United States. Facing declining popularity, he also addresses criticism that his policy on North Korea is too hardline.

Boy with the Long Arms

With father unemployed, our family had to move once again. We ended up at an old temple site located at the foot of a mountain. Once, a Japanese monastery had been there, but now it was all but abandoned. The place had no running water or toilet, and fifteen families lived clustered together. We were all either day laborers or peddlers, and we considered it a good day if we could sell something. Poverty was raw and painful. All around us were sounds of children crying, adults fighting, and the sick dying. What was most difficult to endure was the constant hunger. The hunger became so severe that it hurt. Fortunately, our shanty was the least noisy, since the entire family was out working. Despite our collective efforts, we still had no money, and figuring out what to eat was a daily struggle. During those days, our meals mainly consisted of what we call lees, which is the dreg left behind after you brew rice into alcohol. Lees was cheap, and this was all that we could afford. As the youngest boy, my chore was to go to the brewery every day to pick up the lees. With very little money, we could only afford to buy the worst batch. our family would eat this twice a day for weeks on end; I would walk around red-faced and slightly intoxicated because lees contained alcohol, albeit in small amounts. In junior high school, some of the teachers even mistakenly branded me as a misfit, since my cheeks and the tip of my nose were always red as if I were drunk (I was).

Taking lunch to school was, of course, out of the question. While other kids ate their lunches, I would go outside to the water pumps and fill my stomach with water. I remember drinking until I became bloated. That's when I learned that no matter how much you drink, water never makes you full.

On days when we had to pay our tuition, I would be told to go home and bring back the tuition. Whenever this happened — which was quite often — I would just wander around or go up the hill behind our school and stay there for some time. I knew that even if I did go home, there was no money I could take back. After some time, I would go back to school and ask my teachers for an extension.

We had no money for school because my father, ever since he had been working in Japan, sent money to his older brother back home so that he could send my older cousin to school. My father did this for many years, but when the time came for him to send his own children to school, he had no money. It sounds absurd and irresponsible, but that was my father. I don't blame him, but looking back, it was a hard time for a young boy.

Nonetheless, we never used poverty as an excuse. Instead, poverty strengthened us. If a poor man sits waiting for handouts, he will never be able to escape poverty. to such a man, poverty will be a festering wound, never able to heal. On the other hand, poverty helped me and my siblings strengthen our resolve. We were determined to never let poverty smother us.

By the time I was in fifth grade, there was little I hadn't done to earn money. I sold matches that I made myself by dipping the ends of wooden sticks into sulfur; I made kimbap (rice wrapped in seaweed) and sold them to soldiers near military barracks. Once, I was caught by a military policeman for selling sticky cakes made of wheat flour and was given a nasty beating.

I was constantly hungry, but I continued to go to school, walking four hours a day back and forth. My body became weaker, and by the time I enrolled in junior high school, my body was nearly broken. When I was in eighth grade, I became severely ill and was confined to my bed for three months. I still have no idea what caused this mysterious illness, but my guess is malnutrition. I couldn't afford to go to the hospital, so the best I could do was lie in bed and hope to get better. After three months of bed rest, I got up and resumed my daily routine of walking four hours to school and back.

Maybe it was because of this, but of all the men in my family, I'm the shortest at five feet six inches, while my father and two older brothers are close to five-foot-nine. If I had been able to eat normally, like other growing children, I'm quite certain that I could have become taller. However, my body made up for my short stature by growing arms that are at least four inches longer than the average person's. For this, I was called "the boy with the long arms."

Mother came from a family of devout Christians. My father's family abided strictly to Confucian customs and traditions. My father's relatives looked at my mother and her faith with disdain. However, were it not for my mother's unwavering Christian faith, I'm certain that our family would have succumbed to poverty and its hardships.

Mother was a tall woman with a narrow face. She had penetrating eyes, always sparkling and alert. My mother once told me she had attended elementary school, but I don't recall her telling me if she ever actually graduated. Although she had little formal education, she more than made up for her lack of book knowledge with her keen mind. She had an uncanny ability to remember all sorts of things, such as the birthdays and memorial days of long-deceased relatives and the addresses of friends. She even knew all the important dates of our neighbors. To me, she was the wisest person.

Our normal day would begin at 4:00 a.m. mother would wake us up and make us sit in a circle to say our morning prayers. Mother would lead the prayer, and I recall her prayer being very consistent and unique. She would start off by praying for our country's wellbeing. Then, she would pray for our relatives. After that came a prayer about our neighbors and their families. She would remember what our neighbors were going through and what they were distressed about. She would know who was sick, who was going through trouble, and who had fought with whom. She would pray for them and also pray that all of them would believe in Jesus Christ. And then she would pray for her children. Throughout her prayers, I never once heard her pray for herself. our lives were hard, but others always came first.

These early morning prayers were a nuisance for me. I was always tired from work and desperately wanted more sleep. I would sit in the circle, half-asleep, and would wake up, startled, only when my mother said my name. When my mother prayed for her children, her prayers would be proportional to our ages. In other words, mother would pray longer for my older brothers and sisters, while the youngest would get the shortest prayer. So my prayer was always short. In fact, it was always the same. Mother would pray, "dear father, we pray that Bak will grow strong. Amen." my short prayer was a reflection of my standing within the family.

Because my father worked as a manager at a farm that was owned by the chairman of the board of dong-ji high School, both of my older brothers attended and graduated from dong-ji high School. My oldest brother had a talent for business, so he left home at an early age. My second-oldest brother always excelled at school and was considered the smartest in the family, and so he was sent to Seoul to continue his studies. As for me, I stayed behind in Pohang with my parents and worked to earn money to pay for my older brother's tuition.

When I was young, I felt envious of my older brothers for being able to continue their studies while I had to work alongside mother. Mother always believed that it was more realistic to support her oldest son than to try to send all the children to school. In return, she expected the older ones to excel and to take care of their younger siblings. (For this, my second-oldest brother, Sang-deuk, always felt indebted to me. he would later encourage me to study so that I could pass the exam and go to college.)

My mother would often console me by saying, "Bak, you don't need to go to college or get a degree to be successful in life. You can become a rich man and help others by working hard. Come, we'll work together!" When my mother conceived me, she had a dream in which a full moon came and nestled inside her dress. She told me the moon was so bright its light shone across the fields onto the next village. She considered the dream so fortuitous that she convinced father to name me Myung (bright) Bak (far-reaching).