A Lifetime of Listening to Five Mean Years

The Doors presents a critical look at the songs and short performing career of an iconic American band, examining their relationship with the essence of their generation and their lasting cultural impact.

NPR stories about The Doors 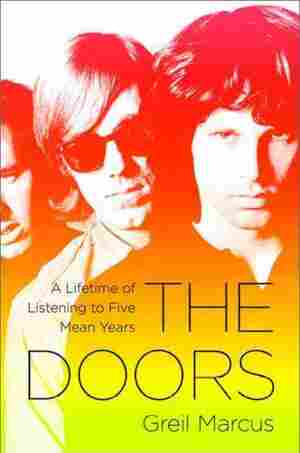 The Doors Prove Strange Days Are Still With Us

December 3, 2011 • Even after all these years, people are still drawn to the music of The Doors. Frontman Jim Morrison is responsible for a lot of that, but author Greil Marcus says what really made the band magnetic was something deeper.

The Doors Prove Strange Days Are Still With Us

By September 30, 1967, when the Doors appeared at the Family Dog in Denver—an outpost of the Avalon Ballroom in San Francisco, where the band had played often in the first months of the year—"Light My Fire" had already reached number one all over the country. In fact it had stolen the year, at first the nearly seven minutes of the song creeping out of the night on the few, new FM rock 'n' roll stations that still seemed more rumor than fact, then in a cut-down, three minute version taking over AM Top 40 stations everywhere, sending their listeners into the record stores or in search of FM if they could find it, to hear the whole song, or to the phones to demand that the AM disc jockeys play it all, which soon enough they did.

This night in Denver it was a fair bet that everyone in the hall had already heard the thing at least four or five hundred times. The Doors had already played it for more than a year, from the nowhere London Fog club off Sunset Strip in Los Angeles to the celebrated Whisky à Go Go on it and at every show after that. They played it before anyone had heard of them; they played it until well after the name of the band was on so many lips that, more than forty years past the singer's death, after he had been dead for far more years than he had been alive, the name of the band still struck a chord. It wasn't a chord of memory. It was a note of possibility, of promises made that still remained to be kept, promises that in life were inevitably failed and in the music left behind were kept over and over again.

"We really didn't see it coming, the new world of rabid individualism and the sanctity of profit," the British novelist Jenny Diski wrote in 2009. "But perhaps that is only to be expected. It's possible after all that we were simply young, and now we are simply old and looking back as every generation does nostalgically to our best of times. Perhaps the Sixties are an idea that has had its day and lingers long after its time. Except, of course, for the music."

There were, of course, those, the great majority, doubtless, who, having finished with their wild youth, put on proper suits come the mid-Seventies and went off to work and a regular life, becoming all their parents could have wished, having just gone through a phase, as the more liberal of the grown-ups had always suggested. But some—these days called, derogatorily, idealists—maintained their former sense that "society" exists, and believe it persists, even beyond the strident years of Margaret Thatcher and the official approved decades of selfinterest and greed that have followed. We are the disappointed remnant, the rump of the Sixties.

But that drama was already taking place only two months after "Light My Fire" hit the top of the charts.

On September 30 there's a lift in Jim Morrison's voice for the first two times he reaches the word fire in each chorus, as if running his hands over the single syllable—always, he communicates that as an idea that word is new to him, and so it comes across as a surprise. You've heard the word in the song, but you haven't begun to follow that fire as far as it goes— that's the feeling. "Fire"—it's a door swinging open in the wind, seen from a distance.

Compared to the first two times the word is sung on record, the third time—"FY-YUR!"—is vulgar, a hook, something to wake you up if the song has already put you to sleep. But tonight, in the first chorus, Morrison stays with the word as he first sang it: Fire . . . fiiire . . . fiiiiire. He holds the word up to the light, looking at it from all sides, still letting it float in the air. "Light my fire" was already a cliché, a tired catchphrase by September; within a year it would be a teen-sex poster and a worldwide easy-listening hit by Jose Feliciano, in two years a porn movie. Now, as the song starts, the word fire seems like a strange thing to say, less a word than a rayograph.

Excerpted from The Doors: A Lifetime of Listening to Five Mean Years, by Greil Marcus. Copyright 2011. Reprinted with permission from PublicAffairs, an imprint of the Perseus Books Group.