A revelatory portrait of the Cold War strategist offers insight into his complex, troubled character while tracing his role in defining period U.S. policy and crafting the Marshall Plan, providing coverage of such topics as his critical views on American diplomacy and his struggles with depression. By the author of The Cold War: A New History. 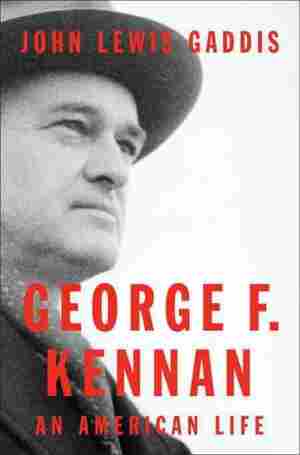 A New Look At The Man Behind U.S. Cold War Policy

December 7, 2011 • In the late 1970s, historian John Lewis Gaddis decided to write a biography of George F. Kennan, the author of the Cold War policy of containment. But the two men agreed it would not be published until after Kennan's death. Neither expected Kennan to live to 101, but now that he's gone, Gaddis has published George F. Kennan: An American Life.

A New Look At The Man Behind U.S. Cold War Policy

"I have sometimes wondered whether you would be able to see your way to going through with it," George Kennan wrote me in 1995, fourteen years after I became his biographer, sixteen years before the book would appear. "But," he added, "I comfort myself with the reflection that I have, after all, deservedly or otherwise, become something closer to a national figure in recent years ... I do not expect to live to see the results of your efforts; and I am not sure that I ought to see them, even if I lived to do it. But write them, if you will, on the confident assumption that no account need be taken of my own reaction to them, either in this world or the next."

Kennan had, of course, already secured an international reputation as a diplomat, grand strategist, historian, memoirist, cultural critic, and antiwar activist when, in 1981 at the age of seventy- eight, he agreed to cooperate in the writing of this biography. We both assumed that it would appear a few years after his death. Neither of us foresaw how far into the future that would be: Kennan would not die until March 17, 2005, at the age of a hundred and one. Characteristically, he blamed himself for the delay.

He saw no signs that the biography was in progress, Kennan wrote in his diary after I paid him a visit in 1997, but "I don't find this surprising. [Gaddis] would no doubt have preferred to write it when I am dead, as I should, in the natural order of things, long since have been." Perhaps "I should do him the favor of dying immediately." His failure to do so did not diminish the guilt he felt. "My unnatural longevity is now becoming a serious burden to others," he lamented in 2003. "Poor John Gaddis has seen his undertaking being put off for years while he waits for me to make way for it."

I assured Kennan, on many occasions, that I didn't mind, that I had other things to keep me occupied, and that I would make the biography my chief priority, apart from teaching, after his death. Our strange relationship went on long enough, though, for my students — who tend to see anyone over forty as having a foot in the grave — to begin speculating somberly about which of us might go first.

From my perspective (assuming survival), the relationship could not have been better. Kennan granted me unrestricted access to himself, his papers, and his mostly handwritten diaries, which alone fill twelve of the 330 boxes of Kennan materials now open for research at Princeton University's Seeley G. Mudd Manuscript Library. With Kennan's encouragement, many of his friends and most of his family talked with me soon after I began this project — fortunately, as it happened, because he outlived almost all of them. I saw him for interviews, and later less formal visits, about once a year for a quarter of a century: he found it a relief, he once told me, that "you're not always around and under foot."

Kennan also gave me, from the outset, the greatest gift an authorized biographer can receive, which was the complete freedom to say what I pleased. The only portion of this book he ever read is a single paragraph in the Epilogue, drawn from a talk I delivered when Princeton opened its centennial exhibition on his life in November 2003. Would it be all right, he asked me that morning, if he afterward saw a copy of what I was going to say? Of course, I replied, I would send it to him. He thanked me, but added that I shouldn't do so if I felt this to be in any way an attempt to "influence" the biography.

He and I originally thought of the book as more political than personal, but when we explained this to George's wife, Annelise, she strongly objected. His writings, she reminded us, were full of gloom and doom: I must get to know him well enough to see that he was not always this way. That, in turn, allowed me to glimpse the stabilizing role she played in his life. It first became clear to me one evening in Princeton in 1983. The Kennans were just back from Norway, and when I asked how it had been, George started complaining about dissolute youth hanging around the docks. Annelise put an end to that: "George, you're always worrying about docks!" All docks everywhere had dissolute youth. That, along with tying up boats, was what they were for. And then, turning to me: "He worries too much about the docks."

Annelise had her way with this book, and that's why I have dedicated it to her memory. It's by no means the first, though, about George Kennan. I've learned from, and respect the work of, my predecessors, especially C. Ben Wright, Barton Gellman, Walter Isaacson and Evan Thomas, David Mayers, Walter Hixson, Anders Stephanson, Wilson D. Miscamble C. S. C., John Lamberton Harper, Richard L. Russell, John Lukacs, Lee Congdon, Nicholas Thompson, and Frank Costigliola, who will now be editing the Kennan diaries. But I've made no systematic effort to compare their conclusions — or even some of my own previous ones — with what this book contains. I want it to be a fresh look at Kennan himself, not at the scholarship he has inspired.

This is also, despite its length, a selective life. I've given more attention to some episodes than to others, and I've left out a lot. I've done so partly because I think that character emerges more clearly from the choices biographers make than from the comprehensiveness they attempt; partly also out of compassion for my readers. Kennan once recommended to me, as a model, Leon Edel's monumental biography of Henry James. He had in mind, though, Edel's psychological insights, not the five volumes required to convey them.