The sequel to The Hummingbird's Daughter finds Teresita Urrea fleeing to Arizona with her father after the Tomochic Rebellion but is inundated with visits from pilgrims seeking her skills as a healer until she is chased to New York by assassins.

NPR stories about Queen of America 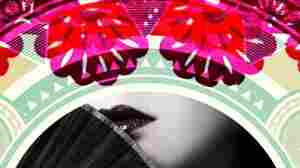 December 6, 2011 • Teresa Urrea was a real Mexican saint who was exiled to the U.S. Queen of America tells the fictional story of her rise to pop star status and her desperate attempt to stop the machine of stardom.

At first, she found it dry. Soon, and forever after, she would find it vast, dreadfully open, more sky than prairie, more prairie than mountain, more mountain than city. The whole would outstrip her ability to see, and she knew her days would end before she had seen one half of the continent and its rivers, its forests, its shores. Dry at first, then running, raining, flooding, wet. Then dry again. But now, in these days, for the first time in her life, she knew she was about to face the endless sea. The Saint of Cabora had discovered America.

To the sea. Among strangers. The rest of her life would be played out, she feared, among strangers. Like these well‑meaning Americanos who, here in the summer of 1900, had taken over her existence.

She crouched against the wall of her train car, feral with shame and grief, skinny, silent, unwilling to eat or turn her face inward from the window that rattled and banged against her forehead for hundreds of hungry miles. She hid her bruises from everyone. She had been bruised before. They had tried to break her before. She was not broken. This was the worst part of her life. But she would find her way through it. She hid her thoughts.

Mr. Rosencrans had begun to think of her as a caged fox. Her other companions watched her surreptitiously, secretly afraid that she had gone insane. Mr. Rosencrans's son Jamie dared to sit beside her and take her hand. She did not speak to him, nor did she turn her face to him, but she allowed her fingers to be tugged, her fingernails to be pol­ished by the pads of his thumbs. When she drew up her knees and placed her feet on the cracked leather seat, pulling herself into a tighter ball, he left her in peace.

She remembered the star‑frost dawn when Huila first took her to discover God. She'd watched the old woman talk to plants and thought her half crazy. She remembered the day Tomás realized she was his daughter, the way the emotions rippled across his face like wind on water, and the still moment when he mysteriously accepted her, like a man greeting his fate, for surely she was precisely that. She remembered her small chapel at the ranch at Cabora, its peaceful curved white walls of painted adobe. She remembered Cruz Chávez, the Pope of Mexico, so serious, so deadly with his big rifle and his scowl, so hilarious when she teased him. How unarmed he was when facing her. And his death far from her, how she imagined her letters to him burning and their ashes falling on his cold face like moths. War consumed her memories. Flames. Howls of rage and terror.

She tugged her old yellow rebozo over her head so that no one could see her face. She was nothing but eyes and she stared north from that right‑side window, watching the tireless convolutions of the Arizona desert in their appalling sprawl and horrid writhing. Jagged peaks ripped at the overwhelming sky. Saguaro skeletons and dread black fos­sils of ruined ocotillo and creosote bushes battered by the white vio­lence of the sun. Shadows spilled like dried blood at the base of shattered rocks. Volcanism. Above, vultures circled arroyos, waiting for dead rattlesnakes to ripen. Nowhere water, nowhere sheltering trees. Cattle were dying slowly from eating cactus and poisoned vines, their ribs already showing through their dusty sides like the rattling wooden bones of those dead cactus giants fallen, stripped of flesh by the sun, and leaving spindles of wood that looked like cages on the colorless hardpan.

The boy brought her a sweet roll and a cup of coffee from his father's hot bottle. She nodded and took the bread into the cowl of her rebozo. She smelled like roses, and her sweat was tart like marigolds. She smelled like a garden that could not be found outside the window.

They paused in Tucson. She craned around and stared at the city scattered to the south of the station. To the north, that great Frog Mountain where Mr. Dinges planned to one day find snow and bears.

She saw her companions staring at her, and she turned her face away from them again. It was a relief when they pulled out, and all the mem­ories of baseball and the Van Order boys and the Arizona nightingales and the swan boats in the pond and the Yaquis embracing her father and Guapo El Chulo in far lamented Tubac fell back, and the town and the mountain and the San Xavier mission were never to be seen again.

It was a few hours to the next stop. Yuma. All she could think of was the dreadful prison — she had heard of the howling despair of the wretches buried in its baking cells cooked alive by the sun. Hours of cowboy ghosts, angry Indian wraiths, endlessly wandering the blank land, unhinged by sudden death, hungry and unable to eat, thirsting but unable to find water. She pressed her eyes shut and put her fingers in her ears.

In her mind, she was flying, flying like she had once dreamed she could fly, when she would take her friends through the cold clouds to far cities and the distant sea. She would put her feet in its insistent waters now. Perhaps she would simply walk into the waves and swim away, forever.

The Saint opened her eyes and watched the land unfurling, flop­ping, rising and falling like a flag or a sheet drying on a clothesline being tossed by the wind. In her mind she was out there, not in the dark squeaking car, and she was in the air, speeding, her hair unfurling behind her for a mile, her arms wide in an embrace of the wind, flying like she had once seen Huila do in her dream upon the llanos many years ago, Huila, drifting in the air as she came back from her journeys, coming down the breeze as if gingerly stepping down a stairway to the empty earth below. Teresita dove and swooped like a hawk over the cactus, over the boulders and hills and crags. The train rocked, its wheels endlessly clacketed on the rails, a vast sewing machine stitching America together, and its lulling rhythm was the closest she got to sleep on that journey. Her flying, the closest she now got to dreams, but she was learning fast: In America, you needed different dreams. And she did not yet know their language.