William F. Buckley Jr. and the Rise of American Conservatism

Documents the story and legacy of a leading architect of the American conservative movement throughout the past half century, tracing his 1955 launch of the influential National Review and his television show Firing Line as well as his role in promoting modern values about the free market, religion and an aggressive foreign policy. 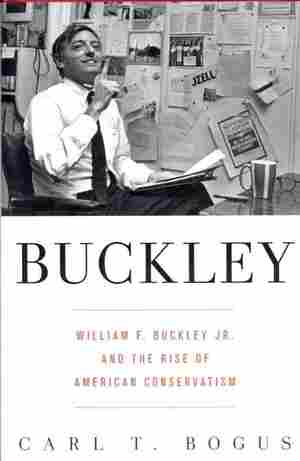 December 17, 2011 • The author is almost solely responsible for conservatism as we know it in America today. A new biography traces the rise of the conservative movement from Buckley's time as a firebrand Yale undergrad to his years as the editor of the conservative journal National Review.

An illustration of a man appeared on the cover of the November 3, 1967 issue of Time magazine. The man held a pen in his right hand, its tip casually touching his lower lip, and he peered out at the reader with a droll expression. No identification was necessary. The visage was unmistakable and as instantly recognizable as that of a movie star or high government official. A small caption read "William Buckley/Conservatism Can Be Fun."

The story described then 42-year-old Buckley's current activities: Buckley wrote a syndicated column, "On the Right," carried three times per week by 205 newspapers; he edited the conservative journal of opinion National Review, which he founded twelve years earlier and which now boasted a circulation of 94,000; he wrote frequently for other major magazines; he hosted a weekly TV show, Firing Line, on which he interviewed — or, perhaps more accurately, debated — many of the nation's most prominent political figures and intellectuals; he even taught a course relating conservative principles to urban problems at the New School for Social Research. Buckley was also the author of seven books, and he had made a big splash two years earlier when he ran for mayor of New York City. Buckley was, moreover, a celebrity. He was a frequent guest on The Tonight Show and similar programs. He and his wife Pat — a handsome and elegant couple — had been recently featured on the cover of Town & Country.

Time's article presented three principal themes about Buckley; two were on the mark but the third was terribly mistaken. As the cover suggested, Time's first theme was that Buckley was enormous fun. He had charisma, panache, and a wit that was often breathtakingly surprising. At a press conference during his 1965 New York City mayoral race, for example, Buckley was asked if he really wanted to be mayor. His response: "I have never considered it." When asked how many votes he expected to get, he replied, "Conservatively speaking, one." This prompted a reporter to ask, "What would you do if you were elected?" "Demand a recount," Buckley answered.

When, several years later, Buckley was asked why as a conservative complaining about the decadence of American culture he consented to give an interview to Playboy, he answered, "To communicate my views to my son." When he asked why Robert F. Kennedy consistently refused to appear with him on Firing Line, Buckley replied: "Why does the baloney reject the grinder?" It is no wonder that an M.I.T. political scientist told Time that Buckley was "an exceedingly witty, attractive and rather insidious spokesman for a point of view for which I have few sympathies," adding, "But if we don't want to die of sheer boredom, the Buckleys should be encouraged."

Time's second theme was that Buckley's brilliance was superficial. The article put it this way: "Buckley is a gifted polemicist; a philosopher he is not." This too was accurate. Buckley was far more clever than thoughtful. Indeed, the article reported that Buckley was then working on a book to be titled The Revolt Against the Masses. Though Time did not say it, Buckley intended this to be his grand work of political philosophy, which he would elaborate his breed of conservatism. Buckley ultimately was to produce 57 books, yet he never was able to finish that one. It was not for want of trying. He had devoted his two-month winter vacation in 1964 in Gstaad, Switzerland to Revolt Against the Masses — Gstaad is where he wrote many of his books, writing in the mornings, skiing in the afternoons, and attending dinner parties in the evenings — but his routine failed him this time round. He had produced only 10,000 words, about ten percent of a book, and what he had gotten down on paper showed he was floundering. He was simply lost when he sat down and tried to elaborate a coherent political philosophy.

Trying to set forth the basic principles of his philosophy also forced Buckley to confront the fact that many of the ideas he expressed with such verve and wit were inconsistent. Buckley had famously said that he would "sooner be governed by the first two thousand people in the Boston telephone directory, than by the two thousand members of the faculty of Harvard University." This was a clever put-down of what Buckley denounced as "the intellectual elite." The problem was that Buckley was not a populist. A good part of him wanted an elite group to govern America; he just wanted it to be a conservative elite rather than the then-dominant liberal elite.

Time's third theme was that Buckley was too much an individualist to be a leader and not savvy enough about practical politics to make a difference. "Daily, Bill Buckley stands at some conservative Armageddon, but not as the leader of an army or even a division." Buckley was, according to Time, "a solitary sniper." "Sometimes," the story said, "even an enemy smiles as Buckley hits the mark; sometimes his own rhetorical smoke obscures the target. Yet he never tires of the battle. Or is it sport?" "Nowhere was Buckley's lack of realism as a politician better demonstrated than in his madcap race for mayor," said Time. All Buckley accomplished by running for mayor of New York, and capturing 13.4 percent of the vote in a three-way race, was to drain away votes from the conservative Democrat and thereby elect the candidate Buckley most disliked, liberal Republican John Lindsay. According to Time, Barry Goldwater told Buckley: "As a political kingmaker, you're a wrong-way Corrigan."

Time, however, was exceedingly wrong about Buckley's leadership and influence. The magazine's ultimate take on Buckley was that he was entertaining but inconsequential. Time argued that Buckley's fatal flaw was his lack of realism, and it offered the following example: "His politics largely formed by the neat formulations of books rather than everyday life, Buckley would like to see a clear-cut ideological division between the two parties: all the conservatives in the Republican Party, all the liberals in the Democratic." Buckley failed to grasp that this was unrealistic, said Time, because he "misunderstands the fluid nature of U.S. party politics."

Buckley was certainly entertaining but he was not a mere entertainer. He was a man with a mission — to refashion conservatism and bring it to power — and he pursued that mission prodigiously, relentlessly, and brilliantly. He used every vehicle he could think of to advance his cause. When in September 1959, Nikita Khrushchev visited the United States at President Eisenhower's invitation, Buckley had National Review rent Carnegie Hall for a protest rally. Remarks by the eleven speakers at that rally — and especially those by the 29-year-old Buckley — made an impact, not only on the more than 2,000 people who attended, but through media reports on people throughout the country. Buckley would also write a series of spy mysteries, several of which became national bestsellers. These books were fun, but they also promoted Buckley's world view about the Cold War and foreign affairs.

Because of his wit, playfulness, and elan, Buckley's seriousness of purpose was often underestimated. Buckley ran for mayor of New York City neither for sport nor to win. He ran to use the race as a platform for promoting conservatism. Time observed that Buckley's campaign "momentarily fascinated many liberals with some thoughtful proposals," but far more important, Buckley recruited to the movement people with conservative sensibilities.

Buckley founded National Review with the goal of reaching "a relatively select group of people, the opinion makers, mostly, and future opinion makers."[i] He hoped this would become a "small, but crucial group" of about 150,000 people. Time did not realize just how effectively Buckley was achieving that goal. Nor did Time realize how a profound impact Buckley and his cohorts at National Review were then having on two generations of future leaders — the generation then on the threshold of power, and following generation of young men and women who were then school or college.

When Buckley founded National Review in 1955, Barry Goldwater, then 46, was the junior Senator from Arizona. From time to time, Goldwater's blunt way of speaking got attention, but attention is not the same thing as respect. Few of the nation's kingmakers — key journalists and party leaders — thought of Goldwater as a national figure until June of 1960, when his iconic manifesto, The Conscience of a Conservative, was released. The book was an instant best-seller. By the fall, half a million copies were in print, and Goldwater was being discussed as a possible future presidential nominee. Although some of the book was drawn from his speeches, Goldwater himself could not have produced so evocative a statement of conservatism. Conscience was ghostwritten by Buckley's brother-in-law and National Review associate, L. Brent Bozell. The following fall William A. Rusher, publisher of National Review, helped create the National Draft Goldwater movement, the organization that shoved a reluctant Goldwater — who realized his candidacy was premature and that he was being used to build a conservative constituency for the future — into the 1964 presidential race.[ii]

Ronald Reagan was 44, a liberal Democrat, and a fan of Franklin D. Roosevelt and the New Deal when Buckley formed National Review. Reagan had begun drifting away from acting. He had taken a job the year before as a spokesperson for General Electric. His job was to host General Electric Theater Sunday evenings on CBS, and to travel the country speaking at GE facilities in forty states, as well as to civic groups in communities where those facilities were located. By making Reagan's sunny visage the public face of G.E., Reagan's boss — Lemuel Boulware, who was in charge of labor relations and public relations — hoped to increase the company's good will. Boulware, however, had strong political views: he believed that conservatism would be good for business generally, for G.E. specifically, and for the country as a whole. He was one of National Review's original financial backers. Boulware gave Reagan (as well as senior G.E. managers) a reading list, and high on that list were National Review and Buckley's syndicated newspaper columns.