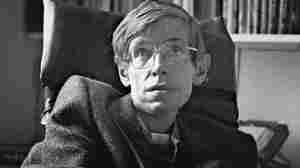 January 3, 2012 • The scientist is known as much for his contributions to theoretical cosmology and quantum gravity as for his willingness to make science accessible for the general public. His work is the topic of a new biography by science writer Kitty Ferguson.

In the center of Cambridge, England, there are a handful of narrow lanes that seem hardly touched by the twentieth or twenty-first centuries. The houses and buildings represent a mixture of eras, but a step around the corner from the wider thoroughfares into any of these little byways is a step back in time, into a passage bending between old college walls or a village street with a medieval church and churchyard or a malt house. Traffic noises from equally old but busier roads nearby are barely audible. There is near silence, birdsong, voices, footsteps. Scholars and townspeople have walked here for centuries.

When I wrote my first book about Stephen Hawking, in 1990, I began the story in one of those little passageways, Free School Lane. It runs off Bene't Street, beside the church of St. Bene't's with its eleventh-century bell tower. Around the corner, in the lane, flowers and branches still droop through the iron palings of the churchyard, as they did twenty years ago and surely for centuries before that. Bicycles tethered there belie the antique feel of the place, but a little way along on the right is a wall of black, rough stones with narrow slit windows belonging to the fourteenth-century Old Court of Corpus Christi College, the oldest court in Cambridge. Turn your back to that wall and you see, high up beside a gothic-style gateway, a plaque that reads, THE CAVENDISH LABORATORY. This gateway and the opening beyond are a portal to a more recent era, oddly tucked away in the medieval street.

There is no hint here of the friary that stood on this site in the twelfth century or of the plants and trees of the gardens that later grew on its ruins.

Instead, bleak, factory-like buildings, almost oppressive enough to be a prison, tower over grey asphalt pavement. The situation improves further into the complex, and in the two decades since I first wrote about it some newer buildings have gone up, but the glass walls of these well-designed modern structures are still condemned to reflect little besides the grim­ness of their more elderly neighbors.

For a century, until the University of Cambridge built the "New" Cavendish Labs in 1974, this complex housed one of the most important centers of physics research in the world. In these buildings, "J. J." Thomson discovered the electron, Ernest Rutherford probed the structure of the atom—and the list goes on and on. When I attended lectures here in the 1990s (for not everything moved to the New Cavendish in 1974), enormous chalk-boards were still in use, hauled noisily up and down with crank-driven chain-pulley systems to make room for the endless strings of equations in a physics lecture.

The Cockcroft Lecture Room, part of this same site, is a much more up­to-date lecture room. Here, on April 29, 1980, scientists, guests and university dignitaries gathered in steep tiers of seats, facing a two-story wall of chalk­board and slide screen—still well before the advent of PowerPoint. They had come for the inaugural lecture of a new Lucasian Professor of Mathematics, 38-year-old mathematician and physicist Stephen William Hawking. He had been named to this illustrious chair the previous autumn.

Hawking's friends and colleagues had learned to expect brash statements from him, and on this occasion he did not disappoint. The title announced for his lecture was a question: "Is the End in Sight for Theoretical Physics?" Hawking declared that he thought it was. He invited his audience to join him in a sensational escape through time and space on a quest to find the Holy Grail of science: the theory that explains the universe and everything that happens in it—what some were calling the Theory of Everything.

Watching Stephen Hawking, silent in a wheelchair while one of his research students read his lecture, no one unacquainted with him would have thought he was a promising choice to lead such an adventure. But most of his listeners knew that theoretical physics is for Hawking the great escape from a prison more grim than any suggested by the Old Cavendish Labs. Beginning when he was a graduate student in his early twenties, he had lived with encroaching disability and the promise of an early death. Hawking has amyotrophic lateral sclerosis, known in America as Lou Gehrig's disease after the New York Yankee first baseman, who died of it.* [There has been recent evidence that Gehrig may not have had amyotrophic lateral sclerosis, but another disease similar to it.] The progress of the disease in Hawking's case had been slow, but by the time he became Lucasian Professor he could no longer walk, write, feed himself, or raise his head if it tipped forward. His speech was slurred and almost unintelligible except to those few who knew him best. He had prepared the Lucasian lecture by painstakingly dictating his text ahead of time, so that it could be read by the student. But Hawking certainly was and is no invalid. He is an active mathematician and physicist, whom some were even then calling the most brilliant since Einstein. The Lucasian Professorship is an extremely prestigious position in the University of Cambridge, dating from 1663. The second holder of the chair was Sir Isaac Newton.

It was typical of Hawking's iconoclasm to begin this distinguished pro­fessorship by predicting the end of his own field. He said he thought there was a good chance the so-called Theory of Everything would be found before the close of the twentieth century, leaving little for theoretical physicists like himself to do.

Since that lecture, many people have come to think of Stephen Hawking as the standard-bearer of the quest for that theory. However, the candidate he named for Theory of Everything was not one of his own theories but N=8 supergravity, a theory which many physicists at that time hoped might unify all the particles and the forces of nature. Hawking is quick to point out that his work is only one part of a much larger endeavor, involving physicists all over the world, and also part of a very old quest. The longing to understand the universe must surely be as ancient as human consciousness. Ever since human beings first began to look at the night skies as well as at the enormous variety of nature around them, and considered their own existence, they have been trying to explain all this with myths, religion, and, later, mathematics and science. We may not be much nearer to understanding the complete picture than our remotest ancestors, but most of us like to think, as does Stephen Hawking, that we are.

Hawking's life story and his science are rife with paradoxes. Things are often not what they seem. Here is a tale in which beginnings are endings; cruel circumstances lead to happiness, although fame and success may not; two brilliant and highly successful scientific theories taken together yield nonsense; empty space isn't empty after all; and black holes aren't black. In the twenty-first century, the effort to unite every­thing in a simple explanation is revealing, instead, a fragmented picture. And most paradoxical of all, a man whose physical appearance inspires shock and pity has led us joyfully to where the boundaries of time and space ought to be—but are not.

Everywhere we look in our universe, on all scales, reality (if Hawking will allow me to use this word) is astoundingly complex and elusive, sometimes alien, often not easy to take, and frequently impossible to predict. Beyond our universe there may be an infinite number of others. The close of the twentieth century has come and gone, and no one has discovered the Theory of Everything. Where does that leave Stephen Hawking's prediction? Can any scientific theory truly explain it all?

From Stephen Hawking: An Unfettered Mind by Kitty Ferguson, copyright © 2012 by the author, and reprinted by permission of Palgrave Macmillan - a division of St. Martin's Press, LLC.