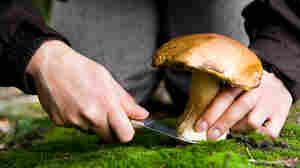 January 18, 2012 • Botanist Nicholas Money's book Mushroom takes readers inside the world of the fungal organisms that appear overnight on lawns, are occasionally poisonous and appear in everything from Alice in Wonderland to some lifesaving medications.

Breakfast is a fantasy for most of us, an opportunity that might, if we're lucky, be afforded by retirement; more often than not, we race into Starbucks while carbon dioxide trails from the car left running in the street. But imagine a different time, when morning began with a walk across a muddy yard, through the gate and up into the meadow to collect a basket of fresh field mushrooms; a time when coffee was poured from a pot heated on a wood-fired stove and the term "skinny macchiato" was reserved for your ema­ciated farmhand. The mushrooms glistened in rings upon the dew-drenched grass; plump stems and white caps bore thin-spoked wheels of chocolate brown gills. Brushed free of earth, these were cut and fried with bacon . . . breakfast would then be followed by a day of backbreaking farm labor, an accident with a scythe, and an infection in your buttocks that would see you into the grave before the month was out. I think I'm happier in the twenty-first century! Though I do long for those mushrooms.

Meadow mushrooms, fruit bodies of Agaricus campestris, were common in the farmland of my English childhood but have become a rarity. Too much fertilizer on the fields, perhaps, or maybe something more insidious and climate change-related is at work. This meadow fare may end up on the endangered species list before long, while their cultivated cousin, the white butt on mush­room, Agaricus bisporus, positively flourishes. Whole or sliced, fresh or canned, this fungus has spread across the globe. Yet, this snowy cultivar is a freak of nature, a mutant whose damaged gills sport half the spore production of its wild kin. As a mutation, this would be crippling in a meadow, where spore production and dispersal are the only reasons for the mushroom's existence. With its adopted role as a grocery item, though, the fungus is doing fine. Hundreds of thousands of tons of white button mushrooms are grown each year in the United States alone. Like other slaves of agriculture, this mushroom is a weakling in the wild but a champion on the farm.

Wild meadow mushrooms, by contrast, are extremely good at their job: a single fruit body can discharge 2.7 billion micro­scopic spores per day, or 31,000 spores per second. But if you look closely at a meadow mushroom—or at any other mushroom, for that matter—it doesn't seem to be doing anything, does it? It is the embodiment of sluggishness. Its emergence may have been impressive, but now that it's erect, the mushroom sits in the grass as the sun rises and the dew evaporates, waiting to be picked for the aforementioned farmer's last seated breakfast. It betrays no motion whatsoever. Or so we thought until the last century—looked at under a microscope, the gills of a mushroom come alive to reveal an Olympiad of gymnastic cells.

The scientist who began to unravel the complexity of mushroom behavior was an English gentleman named Arthur Henry Reginald Buller (1874–1944). Buller was, without any competition before or since, the greatest mycologist in history—the Einstein of the field. Einstein published his most important work in 1905—his annus mirabilis—when he was 26 years old; Buller, like most biologists, peaked a good deal later. The first volume of his Researches on Fungi was published midway through his life, at age 35, the year 1909 mark­ing the beginning of decades of explosive productivity. Another six volumes of the Researches followed, one published posthumously, and a miscellany of unpublished ideas languishes in notebooks in the library at Kew. Born in Birmingham, England, Buller moved to Canada in 1904 as a founding member of the science faculty at the University of Manitoba. There, he became obsessed with the mecha­nism that releases spores from mushrooms.

Spores form on cells called basidia that project horizontally from the vertical surfaces of the gills. The arrangement of spores on their basidia can be examined, quite easily, by excising a gill from any kind of mushroom, laying it flat on a microscope slide, and pro­tecting it from immediate desiccation with a cover glass. Even at low magnification, the grouping of spores in quartets is apparent. This simple observation was first made by Micheli in the eighteenth century and published in his revolutionary work Nova Plantarum Genera. Micheli identified and named many species of fungi and experimented extensively on mushroom formation, dis­crediting the millennial belief in spontaneous generation more than a century before Louis Pasteur. Mushroom spores form in fours because fertilization occurs in the base of each basidium, with two nuclei fusing, then dividing by meiosis. Meiosis produces four nuclei, each with a single set of chromosomes, and each mushroom nucleus is packaged into a spore. The spores sit at the tips of pointed stalks, called sterigmata, that project from the basidium.

Two hundred years after Micheli, Buller looked at spores using the same method, but he also studied them as they fell from slices of mushroom gills clamped in a special chamber. Using a customized horizontal microscope, he watched spores disappear from their basidia and saw others coming into view beyond the gill, a short distance away, before floating slowly out of focus. The spores were being shot from the gill surface in astonishing num­bers by some unknown mechanism, and they were moving very fast—the only evidence of their launch was their disappearance. Buller noted an important detail: in the seconds before each spore vanished, a tiny drop of fluid developed at its base. He called it the "water-drop," and today we refer to it as Buller's drop. Buller guessed that what he saw was important, but never figured out why—it turns out the drop is critical to the mechanism of spore discharge.

The behavior of Buller's drop has recently been studied using high-speed video cameras. Most feature films are captured at a rate of twenty-four individual images per second, and it would require no more than 100 frames to record, for example, Angelina Jolie fall­ing off a camel headfirst into a steaming pile of excrement. Cameras running at this speed are certainly fast enough to show Angelina's in-flight grimace, but they are useless for studying spore movement. Fungal launch mechanisms, and other microscopic movements, are much faster than gravitational tumbles, which is why cameras that grab 250,000 images per second (or more) are the instruments of choice.