Despite the tumor-shrinking medical miracle that has bought her a few more years, Hazel has never been anything but terminal, her final chapter inscribed upon diagnosis. But when a gorgeous plot twist named Augustus Waters suddenly appears at the Cancer Kid Support Group, Hazel's story is about to be completely rewritten.

NPR stories about The Fault in Our Stars 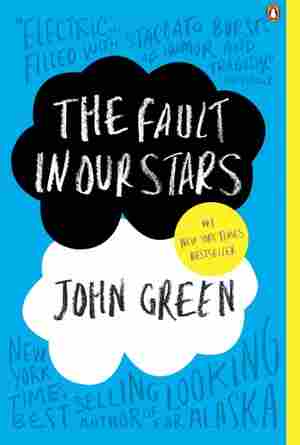 June 5, 2014 • The Fault in Our Stars hits cinemas this week, causing mass outbursts of tears. Author John Green based the character on a real-life girl with cancer — and his own feelings of growing up an outsider. 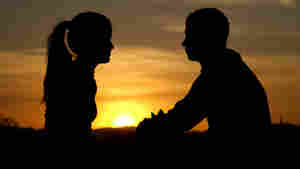 January 28, 2012 • You wouldn't necessarily think of a cancer support group as a place where teens meet and fall in love — but that's exactly what happens to Hazel and Augustus, the young protagonists in The Fault in Our Stars, the latest from author John Green. 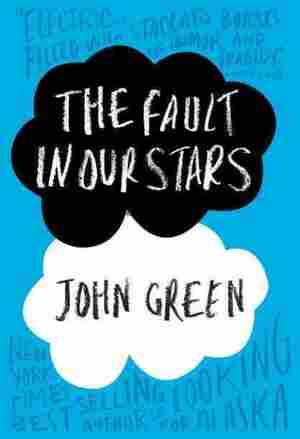 Excerpt: The Fault in Our Stars

The circle filled in with the unlucky twelve-to-eighteens, and then Patrick started us out with the serenity prayer: God, grant me the serenity to accept the things I cannot change, the courage to change the things I can, and the wisdom to know the difference. The guy was still staring at me. I felt rather blushy.

Finally, I decided that the proper strategy was to stare back. Boys do not have a monopoly on the Staring Business, after all. So I looked him over as Patrick acknowledged for the thousandth time his ball-lessness etc., and soon it was a staring contest. After a while the boy smiled, and then finally his blue eyes glanced away. When he looked back at me, I flicked my eyebrows up to say, I win.

He shrugged. Patrick continued and then finally it was time for the introductions. "Isaac, perhaps you'd like to go first today. I know you're facing a challenging time."

"Yeah," Isaac said. "I'm Isaac. I'm seventeen. And it's looking like I have to get surgery in a couple weeks, after which I'll be blind. Not to complain or anything because I know a lot of us have it worse, but yeah, I mean, being blind does sort of suck. My girlfriend helps, though. And friends like Augustus." He nodded toward the boy, who now had a name. "So, yeah," Isaac continued. He was looking at his hands, which he'd folded into each other like the top of a tepee. "There's nothing you can do about it."

Lida was sixteen, and pretty enough to be the object of the hot boy's eye. She was a regular — in a long remission from appendiceal cancer, which I had not previously known existed. She said — as she had every other time I'd attended Support Group — that she felt strong, which felt like bragging to me as the oxygen-drizzling nubs tickled my nostrils.

There were five others before they got to him. He smiled a little when his turn came. His voice was low, smoky, and dead sexy. "My name is Augustus Waters," he said. "I'm seventeen. I had a little touch of osteosarcoma a year and a half ago, but I'm just here today at Isaac's request."

"And how are you feeling?" asked Patrick.

"Oh, I'm grand." Augustus Waters smiled with a corner of his mouth. "I'm on a roller coaster that only goes up, my friend."

When it was my turn, I said, "My name is Hazel. I'm sixteen. Thyroid with mets in my lungs. I'm okay."

The hour proceeded apace: Fights were recounted, battles won amid wars sure to be lost; hope was clung to; families were both celebrated and denounced; it was agreed that friends just didn't get it; tears were shed; comfort proffered. Neither Augustus Waters nor I spoke again until Patrick said, "Augustus, perhaps you'd like to share your fears with the group."

"I fear oblivion," he said without a moment's pause. "I fear it like the proverbial blind man who's afraid of the dark."

"Was that insensitive?" Augustus asked. "I can be pretty blind to other people's feelings."

Isaac was laughing, but Patrick raised a chastening finger and said, "Augustus, please. Let's return to you and your struggles. You said you fear oblivion?"

"I did," Augustus answered.

Patrick seemed lost. "Would, uh, would anyone like to speak to that?"

I hadn't been in proper school in three years. My parents were my two best friends. My third best friend was an author who did not know I existed. I was a fairly shy person — not the hand-raising type.

And yet, just this once, I decided to speak. I half raised my hand and Patrick, his delight evident, immediately said, "Hazel!" I was, I'm sure he assumed, opening up. Becoming Part Of The Group.

I looked over at Augustus Waters, who looked back at me. You could almost see through his eyes they were so blue. "There will come a time," I said, "when all of us are dead. All of us. There will come a time when there are no human beings remaining to remember that anyone ever existed or that our species ever did anything. There will be no one left to remember Aristotle or Cleopatra, let alone you. Everything that we did and built and wrote and thought and discovered will be forgotten and all of this" — I gestured encompassingly — "will have been for naught. Maybe that time is coming soon and maybe it is millions of years away, but even if we survive the collapse of our sun, we will not survive forever. There was time before organisms experienced consciousness, and there will be time after. And if the inevitability of human oblivion worries you, I encourage you to ignore it. God knows that's what everyone else does."

I'd learned this from my aforementioned third best friend, Peter Van Houten, the reclusive author of An Imperial Affliction, the book that was as close a thing as I had to a Bible. Peter Van Houten was the only person I'd ever come across who seemed to (a) understand what it's like to be dying, and (b) not have died.

After I finished, there was quite a long period of silence as I watched a smile spread all the way across Augustus's face — not the little crooked smile of the boy trying to be sexy while he stared at me, but his real smile, too big for his face. "Goddamn," Augustus said quietly. "Aren't you something else."