A Modern Guide to Manners

Title
Would It Kill You to Stop Doing That?
Subtitle
A Modern Guide to Manners
Author
Henry Alford

A humorist tackles etiquette and manners for the modern age, providing interviews with civility experts like Judith Martin and Tim Gunn and more unlikely subjects including a former prisoner and an army sergeant.

NPR stories about Would It Kill You to Stop Doing That? 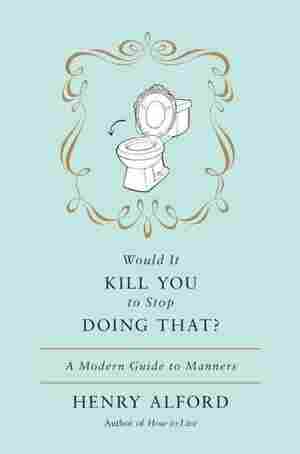 January 17, 2012 • What's wrong with saying "No problem" instead of "You're welcome"? Is it acceptable to answer a phone call with an email? In Would It Kill You To Stop Doing That?, Henry Alford goes on a quest for modern manners; he says most bad behavior is based in ignorance.

Excerpt: Would It Kill You To Stop Doing That?

I. In which the author visits the worldwide epicenter of manners, and has a vexing experience with bananas.

You need spend only twenty-four hours in my beloved New York City to unearth the city's essential truth: People really know how to spit here. These ain't no dainty, Catherine Deneuve–type loogies we're talkin' about, yo — these are liquid blow darts. This shit'll mess you up.

Also: Looking for a fun little fistfight, or to be casually body-checked? Need compelling evidence that "rabble" does not require more than one rabbler?

We got you covered.

Which is why I'd traveled almost seven thousand miles from my home to Japan.

Japan, the Fort Knox of the World Manners Reserve.

The best way to get a really good look at something in your day-to-day life is, of course, to not look at it at all. Leave it. Go somewhere where things are so different, where every one of your preconceptions and assumptions will be made so glaringly obvious, it will be like looking at pictures of yourself naked: searingly verité.

If the thing you want to look at is manners, and the place you go to is Japan, all the better: Here is a place where etiquette has been burnished to a high art. To enter these highly codified realms is to be alternately baffled, delighted, aggrieved, wonderstruck.

I had two teachers during my stay in Tokyo. The first was a Japanese etiquette coach I'd hired for a two-hour lesson. A warm, attractive, bespectacled woman in her thirties, Aiko Uda offered cultural immersion classes to individuals and groups in Tokyo; formerly, while living in Canada, she helped hotels and other companies understand the psyches of their Japanese customers.

Aiko had asked me to meet her in a café near the Shinjuku subway station. Her vibe was equal parts friendly and purposeful: The chamber of commerce is open, but it will be closing at two pm today instead of five.

"What do you notice when you're riding on the subway?" Aiko asked me early on in our session.

"No one eats," I suggested.

"Right. No eating or drinking. And a lot of text messaging but no phone calls." She added, "There's so much social pressure here. If someone talked on a phone, people would stare, and that would be a big deal. It's a lot more like a collective here."

Trying not to let Aiko see me, I casually brushed a piece of my green tea muffin into a napkin in an effort at crumb management.

Aiko smiled warmly and then proceeded to run the Japanese manners gauntlet for me.

Slippers: Take your shoes off at the entrance to apartments and any building where others are doing so. Wear slippers on the intermediary flooring, and wear only socks on the tatami. Don't wear the bathroom slippers anywhere but the bathroom, even if they are more "you" than the slippers offered you on arrival.

Pointing: Don't point with your fingers or feet like an orangutan. If you must indicate something, use your palm.

Eye contact: Too much direct eye contact will freak out your interlocutors. Lose the beadiness, my friend.

Doing business in Japan: Be punctual. Wear a dark, conservative suit. Bring a wrapped gift from a department store's food court; spend about ten to twenty thousand yen, and present it with a lot of self-effacing remarks about the gift's modesty. Have a lot of business cards to hand out. Try to hand out and receive the business cards with both of your hands. Put others' business cards faceup in front of you on a desk or table so you can refer to them. Take notes — it's considered respectful and not wonkish.

The loveliest piece of instruction Aiko offered started with her observation, "We also have this idea of saving face. From the collective. Not to embarrass someone." So when someone mispronounces a word or is unaccountably ignorant of the correct word or term to be used in a conversation, Japanese people will often — instead of outright correcting the person — gracefully interject the correct word into their response. If a visitor to Japan marvels at having flown over a very large mountain that bore an exceptional resemblance to a flattened snow cone, his polite Japanese interlocutor knows to seamlessly drop "Mount Fuji" or "Fuji-san" into his response. Calamitous embarrassment is neatly dodged.

Aiko wondered if I had any questions.

"I read that it's considered impolite to sneeze in public," I said.

"Sneezing is a dirty thing to do. If you can get out of that situation, you should."

"Okay," I said, my mind conjuring the image of a sneeze-threatened salaryman getting up from a conference table during a meeting and then plunging out a skyscraper's window.

"If you must, you must. Do it into a napkin that is disposable."

I also had a noodle question.

I'd read in various books that the Japanese audibly slurp their ramen or soba noodles; indeed, two days earlier, my boyfriend Greg and I had gone to a mom-and-pop lunch counter to eat terrific bowls of ramen with sliced pork. Unhabituated to slurping as we are, we hadn't made any noise, and I'd wondered if the mom and pop had been a little disappointed in us.

I asked Aiko, "Is it rude not to slurp noodles?"

"They would make an exception for you. You are a foreigner and you look like a foreigner."

"We were the only Westerners in this noodle bar. The slurping: It was a wall of sound."

"Maybe sometimes people would look at you — the same as if Japanese people used a knife and fork to eat french-fried potatoes."

I've eaten french fries with a knife and fork before: nice.

My other etiquette coach in Tokyo was self-elected. Greg and I had walked around Tokyo's bustling wholesale fish market, Tsukiji, one day, and stopped to have sushi at one of the tiny, ramshackle restaurants located near the fish selling. I'd already learned a lot of restaurant etiquette from books and from Aiko: Don't wipe your face with the hot towel. Use the top ends, not the licked ends, of your chopsticks to take food from a common dish. Hold the rice bowl up close to your mouth, to avoid spilling. Pour sake for others, and let others pour sake for you, but never pour for yourself.

But it was J. J., our waiter at the restaurant at Tsukiji, who gave me the gift of "please." About five feet tall and in his forties, J. J. wore a down vest, designer sunglasses that rested over his ski cap, and a tool belt that dripped with key chains on thin straps of leather; the look was very Gay Ski-Lift Operator.

Typically, I like a waiter or waitress who will flirt with me a tiny bit, just so I know I'm still in the game, but J. J.'s client comportment was less romance than car wash. Emitting a constant stream of excited chattering in his high-pitched nasal voice, he became a blur of suggestions and salutations: an affection dervish.

And then there were the mimeographs that he handed out — jumbled, handwritten concatenations of text featuring phrases and dining instructions in English. Prominently featured on them was the phrase onegai shimasu (own-uh-guy shi-MOZ-zoo).

I nodded and then onegai-shimasu-ed him.

J. J. returned mid-meal to scribble some phrases and suggestions on the mimeograph. At one point, he started yelling at me "Double hand! Double hand!" and I realized that he wanted me to bring my rice bowl up to my mouth so I would spill less.

A few days after our first visit, I returned to J. J.'s restaurant, without Greg. This time J. J. handed me a second mimeograph detailing dining etiquette.

"Why do you do this?" I asked him. "Is it because foreigners have such bad manners?"

The Japanese word for "yes" (hai!) sounds very, very similar to one of the English words for "hello" (hi!). To an unsophisticated linguist such as myself, this is highly confusing, giving the impression of an advanced greeting disorder:

"Excuse me, sir, can you please tell me where the Shibuya subway stop is?"

"Thank you. So I take a left out your door, then another left?"

"Arigato. And the Ginza subway line stops at Shibuya?"

Feeling unnerved at the beginning of my three-week stay, I was determined to equip myself with some courtesy words in order to mask my paralysis. At bare minimum — which, sadly, is mostly where I live — the two most important phrases for traveling foreigners to learn, it has always struck me, are "Thank you" and "Excuse me." (Sure, "please" would be a nice thing to have, but in a pinch you can use "Thank you.") "That was delicious" would also be lovely — but it, too, is implied with a very effusive "Thank you." Additionally, "Hello" and "Good-bye" are fine things to know; however, these are both expressions that others will be saying to you a lot, and thus you can simply go into parrot mode. If your mind is as cluttered as mine is, you'll want to keep things to a bare minimum, which brings us back to two pillars of courtesy, "Thank you" and "Excuse me."

Japan-wise, "Thank you very much" was easy — the phrase "Domo arigato, Mr. Roboto" echoes in one's head. I found "Excuse me" in my guidebook: sumimasen (soo-me-moss-SEN). But as soon as Greg and I had arrived at the airport for our flight to Tokyo, I realized that I wasn't sure if sumimasen meant "I'm sorry" as well as "Excuse me." And so I found myself chatting up our Continental Airlines service representative. I'd fallen deeply in love with her even before we started talking: She'd seen me tangling with an obstreperous check-in machine, and had saved me. That her name tag bore the name hiroko woodcock only sweetened my admiration for this celestial being: a huge head on top of a tiny body, emitting a pleasing stream of guidance and high-pitched murmuring. Think warm, sympathetic eyes. Think neck scarf knotted at throat to resemble silk croissant.

"Hey, I've got a question for you," I added. "If I bump into someone on the street in Tokyo, do I say sumimasen?"

"I'm trying to be a cultural ambassador."

"You're going to change the world!"

She paused before counseling, "In Tokyo not many people will say this. They're in a hurry."

"But I wish you good luck!"

Excerpted from Would it Kill You to Stop Doing That? A Modern Guide to Manners. Copyright 2012 by Henry Alford. Reprinted by permission of Twelve/Hachette Book Group, New York, NY. All rights reserved.