Title
All I Did Was Shoot My Man
Author
Walter Mosley

When Zella Grisham is accused of both shooting her boyfriend and stealing more than six million dollars from the Rutgers Assurance Corp., Leonid McGill investigates, while his own family life begins to unravel around him.

NPR stories about All I Did Was Shoot My Man 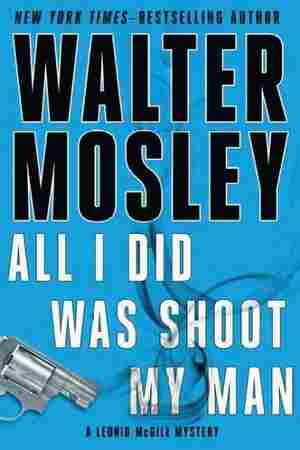 January 26, 2012 • In All I Did Was Shoot My Man, Walter Mosley tells the story of a woman trying to get her life back on track after serving an eight-year prison sentence. Private investigator Leonid McGill knows she's innocent and tries to help her start over.

Excerpt: All I Did Was Shoot My Man

I'd been running a low-grade fever for nearly a week. It wasn't debilitating; more like consciousness-altering. My senses were affected. Sometimes the world looked fuzzy and at other times sounds became muffled, then intense. I could feel myself moving through the heavy atmosphere with the full weight of my one hundred and eighty-three pounds pressing down on the soles of my feet.

Aspirin usually dispelled these symptoms, but I'd left the little plastic box on my desk and couldn't leave the urine-smelling corner I was in because I was there to meet a client — of sorts.

The lower level of the Port Authority Bus Station at Fortysecond Street was populated by young hopefuls on the way to colleges and new lovers on the way to life. Mixed in with the optimists moved also-rans headed anywhere but where they found themselves. Sprinkled in among the civilians were crackheads, along with various policemen, Port Authority employees, and freelance crooks.

A middle-aged man wearing horn-rimmed glasses and toting a clipboard was standing outside a women's bathroom asking the ladies as they came out if they had any complaints about the facilities. Some were polite, others ignored him, and still others stopped to chat about leaks and smells and the quality or lack of paper products.

The bus was five minutes late, but there weren't many of us there waiting. Other than myself there were three older women and a younger one. All of us were black but that needn't have been the case.

Two young men, one black and the other white, started making up rhymes to an imagined beat as they leaned against the red-lacquered tile wall across the way. The plain young black woman, waiting for the same bus I was, stole glances at them.

The rhyming young men were dirty, probably high, and likely homeless — but they were singing and moving to an imagined beat that men had been keeping alive in their breasts longer than there were any buildings or buses — or prisons.

"Excuse me, mistah?" a woman said.

She had amber skin with pecan brown freckles, burnt orange eyes, and an expression that had been spawned when she needed a doting parent to indulge her fears. The fact that she was near sixty had not extinguished the fears haunting her worried inner child.

"Yes?" I said, happy to be distracted from my fevered perceptions.

"Is this the bus from Albion prison?"

"It will be when it gets here."

She smiled, recognizing the skeptical forecast given by our common poor and working-class ancestors.

"My cousin's child Missy got out this morning. I figured that if I met her here and bought her a sandwich or a dress or sumpin' she'd know that some'un cared about her and maybe she'd feel bettah about her chances of stayin' out."

"I think you might be right about that," I said. I wanted to say "ma'am" but she was only a few years older than I.

"You got family you meetin'?" she asked, now that we were temporary friends.

The nameless cousin of the just-released Missy reared back a little and then turned away. I had transformed from a new friend to a potential foe in just a few words.

That was all right with me. The fever had already latched onto her question and was reeling out a story of its own.

Zella Grisham had tried to kill her boyfriend — shot him three times. But that's not why she had done eight years of hard time on a sixteen-year sentence.

Some people just had bad luck; in the end, I supposed, all people did.

Hers was a perfectly executed heist, and mine, though I didn't know it at the time, was her release.

She was a third the age of Missy's cousin, white and pretty in the garish light of the bus depot. With stark white skin, and hair bleached so completely that it blended in with it, she looked like a beautiful ghost looking for souls in that limbo of the Port Authority.

"I gave up rutting in public corners when I dropped out of high school the second time. That was back before your mother was out of diapers."

"I got a key to a janitor's closet upstairs," she replied, unperturbed. "You can't lie down, but there's a chair, and a chain to make sure we're not interrupted."

"How'd you get that?" I asked — professional curiosity. "I keep the janitor happy and pay him thirty dollars a day. It cost you twenty-five for a blow job."

The fever had many facets. It was a fount of revelations but also violent. A depth charge went off in the sea of my mind when that child said the words indicating the act she was willing to perform. The muscles in my abdomen twisted and I sneered with anticipated satisfaction.

"I could see you interested," she said in that knowing way of youthful power.

I took in a breath, searching for the right words.

"I got a condom you could wear if you afraid'a disease," she added.

I rarely go to prostitutes, but I hadn't had sex in months. My wife had other interests, and my girlfriend let me go for the sake of her sanity.

"I'm, I'm waiting for someone," I said, smiling at the rare stammer in my voice.

"They could wait," the ghoul hissed.

The fever had associated itself, at that moment, with my soul; the soul I didn't believe in. It felt as if she, this ethereal denizen of the bus station, could suck the fever and the spirit right out of me. It sounded like relief so profound that for a moment I considered following her up to the janitor's closet.

The words entered my head in an abstract way, this because the young prostitute was looking directly into my eyes. Hers were ice blue, unforgiving and yet laser-like in their wordless understanding of my needs.

Man is an animal, Trot, my old man used to say, never forget that.

"Alyssa!" a woman cried out.

"Mama!" another woman shouted in a husky voice.

"You want it?" the young prostitute whispered.

I was ready to go with her, at least I wanted to be ready, but then I saw the woman I'd talked to earlier walking away with a young dark-skinned woman wearing jeans and a bright green T-shirt two sizes too large.

I looked around and saw that the bus had arrived and disgorged at least part of its complement. Young and not so young women were walking toward the upward-leading stairs, elevators, and escalator. Only the ones met by loved ones were smiling. I turned my back on the white woman to look at the door to the bus port.

She was coming through, sporting red hair and an orange rayon pantsuit. The rucksack she carried was drab green and the look on her face was sour.

I raised my heavy mitt to wave her toward me. She reared back as Missy's cousin had done and then cautiously leaned in my direction. I turned then to apologize to the young white woman. But she was gone. I looked up to see where to, but it was as if she had evaporated in the few seconds that had elapsed.

It was then that I worried that there was more to the fever than I had believed. Could I have hallucinated the whole encounter? Were my desires and distractions driving me mad?

That question would have to wait for the moment, however.

I had a job to do and she was standing a few feet away, glowering at me like so many others in my long life of misdeeds.

Reprinted by arrangement with Riverhead, a member of Penguin Group (USA) Inc., from All I Did Was Shoot My Man by Walter Mosley. Copyright 2012 Thing Itself, Inc.