The Worldwide Struggle for Internet Freedom

A leading Internet policy specialist outlines arguments for protecting the public's personal rights in the face of rivaling corporations and countries vying for Internet control, addressing a range of topics from online freedom and privacy to legal concerns and Internet reputation.

NPR stories about Consent of the Networked 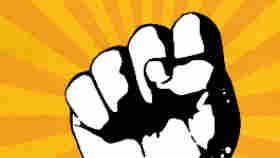 January 30, 2012 • In Consent of the Networked, Rebecca MacKinnon investigates how the governments and corporations that control the digital world can impinge on civil liberties.

Excerpt: Consent of the Networked

On March 5, 2011, protesters stormed the Egyptian state security headquarters. In real time on Twitter, activists shared their discoveries with the world as they moved through a building that had until recently been one of the Mubarak regime's largest torture facilities. Videos and photos uploaded to YouTube, Flickr, and Facebook showed a flurry of young men (and a few women) opening doors and cabinets, sifting through piles of shredded paper, pulling out stacks of files, and examining pieces of equipment. Some were implements of torture.

"Entered the small compound where I was locked," tweeted Hossam el-Hamalawy, a thirty-three-year-old journalist and activist who had been detained and tortured several times since they first picked him up as a student activist thirteen years ago. Returning home a few hours later, he told his followers, "I've been crying hysterically today."

Some activists found their own files. They were full of wiretap transcripts, reams of printouts of intercepted e-mails and mobile messages. All kinds of records had been kept about them: lurid details of divorces and personal relationships; all their past job applications; foreign organizations they had communicated with; international meetings they had attended. Clearly the Egyptian government had sophisticated surveillance technology at its disposal. It still does.

Wael Ghonim, the young Google executive and a hero of the Egyptian revolution for his role in creating and running the Facebook protest group that played a key role in getting the first wave of protesters into Cairo's Tahrir Square, famously told CNN, "If you want to liberate a society just give them the Internet." The Internet certainly did play a powerful role in bringing down a dictator — the Internet in the hands of a committed community of activists who spent the better part of a decade building a movement. It is less clear how helpful the Internet will be when it comes to protecting the Egyptian people's rights in the post-Mubarak era and in building a new democracy.

If the events of 2011 taught the world anything, it is that although the Internet empowers dissent and activism, it is not an instant freedom tonic that, when applied in sufficient quantities, automatically results in freedom. It is time to stop debating whether the Internet is an effective tool for political expression, and to move on to the much more urgent question of how digital technology can be structured, governed, and used to maximize the good it can do in the world, and minimize the evil.

Even if Egypt does manage to establish a stable democracy, the Egyptian people face a problem that none of the world's democracies have yet solved: How do we make sure that people with power over our digital lives will not abuse that power?

In mature democracies, laws and regulations governing digital platforms and networks arguably represent "consent of the governed" — to the extent that political traditions and institutions reflect the will of the people as a whole, as distinct from representing mainly special interest groups, corporate lobbies, and the loudest and most extreme elements of both political parties. Of course, the extent to which democratic politics in the United States, United Kingdom, and other democracies around the world actually succeed in accomplishing the former rather than the latter is a matter of fierce debate.

Americans across the political spectrum continue to have real and legitimate concerns that the system — the political process, media organizations, and information networks — is vulnerable to capture, manipulation, and abuse. There is good reason to worry about the way in which our digital lives are being shaped by regulators, politicians serving powerful constituencies, and companies seeking to maximize profit. The potential for manipulation and abuse of the digital networks and platforms that citizens have come to depend upon is one of the more insidious threats to democracy in the Internet age. If citizens of established democracies cannot prevent such manipulation, the prospects for aspiring and fragile democracies in Tunisia and Egypt, let alone hopes for the future in places like Iran and China, look much less bright.

It is a reality of human nature that those with power, however benign or even noble their intentions, will do what they can to keep it. The American revolutionaries certainly understood this truth. As James Madison, one of the framers of the Constitution, observed near the end of his life in an 1829 speech before the Virginia Constitutional Convention, "The essence of Government is power; and power, lodged as it must be in human hands, will ever be liable to abuse." This was their fundamental assumption as they formed new institutions of the world's first democratic republic.

In the physical world, mechanisms of democratic politics and constitutional law have worked — not perfectly, but still far better than any alternatives — to protect citizens' rights. But these mechanisms are no longer adequate for people whose physical lives now depend on what they can or cannot do (and what others can do to them) in the new digital spaces where sovereignty and power are ill-defined and highly contested. The reality is that the corporations and governments that build, operate, and govern cyberspace are not being held sufficiently accountable for their exercise of power over the lives and identities of people who use digital networks. They are sovereigns operating without the consent of the networked.