Discovering The Pleasures Of Real Beer With Real Food

A tribute to traditional beer making by the head of the Brooklyn Brewery notes its accessibility and how its varied flavors and versatility make it compatible with a wide range of foods, in a guide that also offers an illustrated tour of top international breweries. Reprint. 25,000 first printing.

NPR stories about The Brewmaster's Table 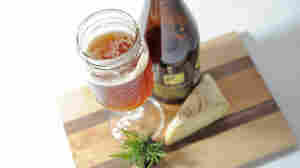 When they work well, beer and cheese pairings offer both harmony and contrast, says Garrett Oliver, editor of The Oxford Companion to Beer. See a list of pairings below. Claire O'Neill /NPR hide caption

In Matchup Of Beer And Cheese, Everybody Wins — With A Good Coach

February 3, 2012 • Nothing classes up a Super Bowl party as effortlessly as some high-quality cheese. And nothing goes better with cheese than beer, says brewmaster Garrett Oliver. He shares a list of beers and cheeses that taste great together. 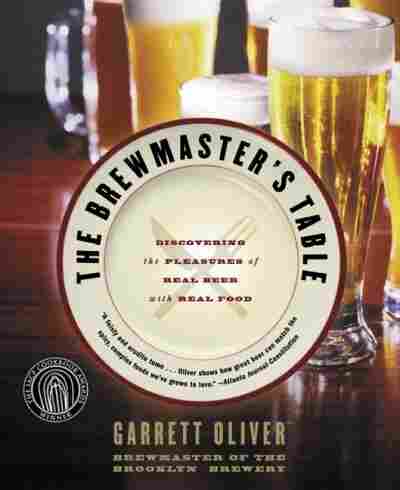 Discovering the Pleasures of Real Beer with Real Food

When people ask me what I do for a living, I reply that I am a brewmaster.

I have to admit that I get a kick out of their reactions. Often they take a step or two back and look me over carefully, perhaps inspecting me for horns or a cloven foot. Might I turn them into newts? One thing hasn't changed much over the past 4,000 years - brewing has always been considered mysterious. Old documents incorporating medieval brewers' guilds mention the "mystery and art of brewing." There is little mystery to winemaking - after all, many of us made crude wine as a science project in elementary school. We all know what wine is, even those of us who never drink it. Do you know what beer is? Most people haven't the slightest clue. Even people who drink beer every day rarely know anything about where it came from, a fact that makes it unique as a food product. Before we delve into history, styles, flavors, and food matches, we need to have some idea what beer is and where it comes from. I don't carry a wand, but there are parts of the brewing process that still strike me as magical, even after all these years.

Wine is a simple beverage to produce. In order to make wine, one needs only grapes. Crush the grapes, and the natural yeast on the grape skins will start the fermentation; and pretty soon - voilà! - you'll have wine. In fact, if you have enough grapes, they'll actually crush themselves by their own weight - the winemaker doesn't even need to do that! Beer is not nearly so simple, and brewing is a far more complicated art than winemaking. I can already hear the bleats of protest from the wine folks, but I'm afraid it's true. Brewing, at the very simplest, requires barley malt, yeast, hops, and water. True, the vintner must tend, prune, and choose his grapes carefully, and then oversee a long process of vinification. The brewmaster, however, must choose among a dizzying array of malts, roasted grains, unmalted grains, sugars, dozens of varieties of hops, and hundreds of strains of yeast, and then cause these ingredients to create exactly what he has in mind. In many ways, the brewmaster is more like a chef than he is like a winemaker. If the beer turns out poorly, he cannot shrug his shoulders and claim it was a bad year. A fine beer is not a discovery or simply a part of nature, but a work of art: a product of pure intention and imagination.

Brewing is also hard work. There are no easy sun-filled days of dancing in woven baskets - you can dance on the barley all you want, but it has no juice to yield up. The brewer must work to loosen its grip on the essential ingredient - sugar. Anyone who seeks to create an alcoholic beverage must have sugar to ferment. Grapes have their own sugar, but barley is packed with starch, which must be converted into sugar in order to make beer. This process starts with the mash, where starches are converted into a sweet liquid called the wort (pronounced "wert"). The wort is collected in a kettle, where the bitterness, flavor, and aroma of the hops are extracted into the wort by boiling. The hopped wort is then chilled and sent into a fermentation vessel where yeast is added and works its wonders, transforming homely sweet wort into beer. Sounds simple, doesn't it? In some ways, it is. But then, so is a soufflé.

There are many details along the way that will determine how the beer will turn out. Join me now on a journey from grain to glass as we unlock the mystery and art of brewing. First, let's have a look at the ingredients. Every journey must begin with a single step; and when it comes to beer, that first step is malting the barley.

Barley (Hordeum vulgare) is a tall, tawny-colored grass with a seed head on top of its stalk. A field of barley looks a lot like a wheat field. For the brewer, barley has special gifts that other grains cannot offer. Its hard husk, low protein content, and high starch content all make it a more suitable candidate for brewing than for baking. Barley grows in temperate climates around the world. Like many grains, it comes in a number of strains and varieties. And like many other agricultural food products, barley varieties have become largely homogenized over the years. Growers have sought to maximize their yields per acre and also to produce barleys with little depth of flavors for use in mass-market beers. There are, however, still many barley varieties that command respect and high prices for their rare depth of flavor, such as the old British varieties Maris Otter and Golden Promise. "Maritime" varieties, grown near the sea in England and Germany, are favored by some brewers, while others prefer flavors developed in the sunshine on the plains of the United States. The sweet, toffeeish flavor of German barley varieties is unmistakable, and German brewers combine them with special mashing techniques to create beers with unique malt flavors. The distinct character of the barley variety will find its way through the brewing and fermentation process and show itself in the finished beer. At one time, all breweries malted their own barley, but these days the job is usually done by professional "maltsters." At Brooklyn Brewery, I buy malt from the United States, England, Scotland, Canada, Belgium, and Germany. Buying malt this way is more expensive, but each of these malts has distinctive qualities it lends to our beer.

Malted barley, also known simply as malt, is barley seed that has been steeped in water until it starts to sprout, then dried out in a kiln. Unmalted barley is as hard as stone - try to eat it, and you risk breaking a tooth. Malting turns the starch inside the seed soft, white, powdery, and ready for brewing. The germination is traditionally carried out by spreading the barley several feet deep over a large concrete floor specially built for the purpose. Water is sprayed onto the barley, and the dormant seed wakes up - germination begins. The maltster must keep the seedbed cool and aerated, and he does this by sending rakes through the germinating seeds. This also keeps the seeds separate - they would otherwise become a tangled mass as their rootlets braided together. The raking would once have been done by hand, but today this is rare; mechanized raking systems are now the norm.

A barley seed is essentially like a little egg - an egg with a plan. The plan calls for the seed to develop enzymes to break down its starch into sugars, burn the sugars for energy, use that energy to grow leaves, and then start photosynthesis when the sugars are used up. The maltster has far loftier plans for the barley seed ...