This collection of stories explores the clash and meld of American and Filipino culture, centering around the sometimes suffocating ties of family, the melancholy of isolation and the need to find connections. 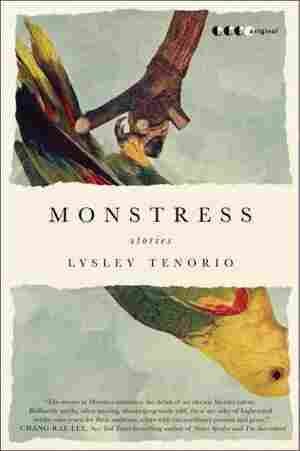 February 1, 2012 • Lysley Tenorio's humorous and heart-rending short stories take us into the lives of B-movie actresses, superhero obsessives and the residents of leper colonies.

In 1966, the President of CocoLoco Pictures broke the news to us in English: "As the Americanos say, it is time to listen to the music. Your movies are shit." He unrolled a poster for The Squid Children of Cebu, our latest picture for the studio. Our names were written in drippy, bloody letters: A Checkers Rosario Film was printed above the title, and my credit was at the bottom. Reva Gogo, it said, as the Squid Mother.

In its first week in release, Squid Children played in just one theater in all of Manila, the midnight show at The Primero. "A place for peasants and whores," the President said, tearing the poster in half, "and is it true they use a bed sheet for a screen?" Then, speaking in Tagalog, he fired us.

From CocoLoco we walked home, and when we passed The Oasis, one of the English-only movie theaters that had been sprouting up all over Manila, Checkers threw a stone at Doris Day's face: Send Me No Flowers was playing, and above the box office Doris Day and Rock Hudson traded sexy glances and knowing smiles. "Their fault!" he said, and I understood what he meant: imported Hollywood romance was what Manila moviegoers were paying to see, and Checkers' low budget horror could no longer compete. "All that overacting, that corny shit!" But here was the truth: those were the movies I longed for Checkers to make, where men fall in love with women and stay there, and tearful partings are only preludes to tearful reunions. Real life — that's what I wanted to play, but my only roles were Bat-Winged Pygmy Queen, Werewolf Girl, Two-Headed Bride of Two-Headed Dracula, Squid Mother — all those monstrous girls Checkers dreamed up just for me.

I took the second stone from his hand and put it in my purse. "Time to go home," I said.

But we did not give up. Checkers shopped his latest (and last) screenplay, Dino-Ladies Get Quezon City, to all the Manila studios, even one in Guam; every answer was no. I auditioned and auditioned, and though casting agents liked my look (one called me a Filipina Sophia Loren), cold readings made me look like an amateur: I shouted dialogue that should have been whispered, and made tears of sorrow look like tears of joy.

For the next three years, this was our life: I worked as a receptionist at a dentist's office and Checkers lamented. One night, I woke to the sound of thwacking, and I found him drunk on the balcony, cracking open coconuts with a machete. "Was I no good?" he asked, his grunts turning to sniffles. I went to him, rested my head against the back of his neck. "Your chance will come again," I said. "But it's time for us to sleep."

Sometimes, when I play that night over in my head, I give it a new ending: I answer Checkers with the truth, that the most he ever achieved was minor local fame; that his movies were shoddily produced, illogically plotted, clumsily directed. This hurts Checkers — it hurts me, too — but the next morning we go on with our life, and I marvel at the possibilities: we might have married, there could have been children. We would still be together, and we wouldn't have needed Gaz Gazman, that Saturday morning in January of '70, when he rang our doorbell.

"Who are you?" I asked. Through the peephole I saw a stranger in a safari hat wipe his feet on our doormat as though we had already welcomed him.

"The name's Gazman. From Hollywood, USA. I'm here for a Checkers" — he looked at the name written on his palm — "Rosario."

I put my hand on the doorknob, made sure it was locked. "What do you want?"

He leaned into the peephole, his smile so big I caught the glint of a shiny gold crown on a back tooth. "His monsters," he said.

From the bedroom I heard Checkers start his day the usual way, with a phlegmy cough from the previous night's bourbon. I went to him. "Someone is here," I said, poking his shoulder. "From Hollywood."

He lifted his head.

I returned to the front door. I didn't want to, but I did. For Checkers. I unlocked the lock and let Gaz Gazman in.

I led him to the kitchen, offered him a plate of Ritz crackers and a square of margarine. I stood by the sink, watching him as he ate: his shirt and shorts were covered with palm trees, and his purple sandals clashed with the orange lenses of his sunglasses. A large canvas bag was on the floor beside him, and his hat was still on.

Checkers stared at Gaz with bloodshot eyes. "Used to be," he said, then sat down.

Gaz explained himself: he was in Manila visiting an ex-girlfriend, a make-up artist for CocoLoco. He toured the studio, went through their vaults, and found copies of Checkers' movies. "I watched them all, and I thought, jackpot-eureka! This is the real deal. They said if I wanted to use them, I should find you." He pulled four canisters of film from his canvas bag and stacked them on the table. "And now you're found."

Checkers took the reels from the canisters. I could hear him whisper their titles like the names of women he once loved and still did — The Creature in the Cane, Cathedral of Dread, DraculaDracula, The House on Dead Filipino Road. "Use them," he said. "What for?"

"Three words," Gaz said. "Motion. Picture. History." He got up, circled the table as he explained his movie: en route to earth from a distant star system, the crew of The Valedictorian crash lands on a hostile planet inhabited by bat-winged pygmies, lobster-clawed cannibals, two-headed vampires. "That's where your stuff comes in. I'm going to splice your movies with mine." He went on about the mixing-up of genres, chop-suey cinema, bringing together east and west. "We'd be the ambassadors of international film!"

"What's your thinking on this?" Checkers asked me in Tagalog. "Is this man serious? Is he just an American fool?"

"Ask how much he'll pay," I said, "get twenty percent more, give him the movies and show him to the door."

"All our hard work for a few pesos?" Checkers looked at me as though I'd slapped him. "That's their worth to you?" He asked if I'd forgotten the ten-star reviews, the long lines on opening night, but I didn't want to hear about it, not anymore, so I reminded him about the life we'd been living the last three years — how I sat day after day in an un-air conditioned dentist's office, staring at a phone that never rang, while he slept through hangovers into the late afternoon, only to reminisce about our CocoLoco days throughout the night. "Take the money," I said, "and let's be done with this."

I switched back to English. "We are discussing, not fighting. We don't have lawyers or agents to counsel us over these matters. There is corruption and dishonesty in the movie business here in Manila. It's not like in Hollywood."

"But I'm one of the good guys," Gaz said, and to prove it, he made us an offer: "Come to America. Just for a week. You can see a rough cut, visit the set, meet the cast. Plenty of room at my pad. I'll even take the couch. And if you don't like what you see, I'll reimburse you the airfare and you won't ever hear from me again."