Meg Murry and her friends become involved with unearthly strangers and a search for Meg's father, who has disappeared while engaged in secret work for the government.

NPR stories about A Wrinkle In Time 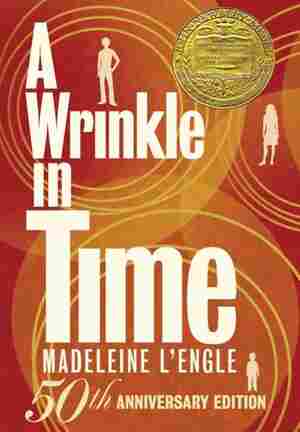 June 17, 2014 • You don't need to be H.G. Wells to make these journeys — from ancient Korea to future Oxford University and outer space in the 25th century, just turn the page and you'll be there.

June 17, 2014 • You don't need to be H.G. Wells to make these journeys — from ancient Korea to future Oxford University and outer space in the 25th century, just turn the page and you'll be there.

March 5, 2012 • How did a book featuring complex discussions about quantum physics, theology and mathematics become a beloved children's book? Madeleine L'Engle's classic had a rocky path to publication.

Excerpt: A Wrinkle In Time

It was a dark and stormy night.

In her attic bedroom Margaret Murry, wrapped in an old patchwork quilt, sat on the foot of her bed and watched the trees tossing in the frenzied lashing of the wind. Behind the trees clouds scudded frantically across the sky. Every few moments the moon ripped through them, creating wraithlike shadows that raced along the ground.

Wrapped in her quilt, Meg shook.

School. School was all wrong. She'd been dropped down to the lowest section in her grade. That morning one of her teachers had said crossly, "Really, Meg, I don't understand how a child with parents as brilliant as yours are supposed to be can be such a poor student. If you don't manage to do a little better you'll have to stay back next year."

During lunch she'd roughhoused a little to try to make herself feel better, and one of the girls said scornfully, "After all, Meg, we aren't grade-school kids anymore. Why do you always act like such a baby?"

And on the way home from school, as she walked up the road with her arms full of books, one of the boys had said something about her "dumb baby brother." At this she'd thrown the books on the side of the road and tackled him with every ounce of strength she had, and arrived home with her blouse torn and a big bruise under one eye.

Sandy and Dennys, her ten-year-old twin brothers, who got home from school an hour earlier than she did, were disgusted.

"Let us do the fighting when it's necessary," they told her.

—A delinquent, that's what I am, she thought grimly. —That's what they'll be saying next. Not Mother. But Them. Everybody Else. I wish Father—

But it was still not possible to think about her father without the danger of tears. Only her mother could talk about him in a natural way, saying, "When your father gets back—"

Gets back from where? And when? Surely her mother must know what people were saying, must be aware of the smugly vicious gossip. Surely it must hurt her as it did Meg. But if it did she gave no outward sign. Nothing ruffled the serenity of her expression.

—Why can't I hide it, too? Meg thought. Why do I always have to show everything?

The window rattled madly in the wind, and she pulled the quilt close about her. Curled up on one of her pillows, a gray fluff of kitten yawned, showing its pink tongue, tucked its head under again, and went back to sleep.

Everybody was asleep. Everybody except Meg. Even Charles Wallace, the "dumb baby brother," who had an uncanny way of knowing when she was awake and unhappy, and who would come, so many nights, tiptoeing up the attic stairs to her — even

How could they sleep? All day on the radio there had been hurricane warnings. How could they leave her up in the attic in the rickety brass bed, knowing that the roof might be blown right off the house and she tossed out into the wild night sky to land who knows where?

—You asked to have the attic bedroom, she told herself savagely. —Mother let you have it because you're the oldest. It's a privilege, not a punishment.

"Not during a hurricane, it isn't a privilege," she said aloud. She tossed the quilt down on the foot of the bed, and stood up. The kitten stretched luxuriously, and looked up at her with huge, innocent eyes.

"Go back to sleep," Meg said. "Just be glad you're a kitten and not a monster like me." She looked at herself in the wardrobe mirror and made a horrible face, baring a mouthful of teeth covered with braces. Automatically she pushed her glasses into position, ran her fingers through her mouse-brown hair, so that it stood wildly on end, and let out a sigh almost as noisy as the wind.

The wide wooden floorboards were cold against her feet. Wind blew in the crevices about the window frame, in spite of the protection the storm sash was supposed to offer. She could hear wind howling in the chimneys. From all the way downstairs she could hear Fortinbras, the big black dog, starting to bark. He must be frightened, too. What was he barking at? Fortinbras never barked without reason.

Suddenly she remembered that when she had gone to the post office to pick up the mail she'd heard about a tramp who was supposed to have stolen twelve sheets from Mrs. Buncombe, the constable's wife. They hadn't caught him, and maybe he was heading for the Murrys' house right now, isolated on a back road as it was; and this time maybe he'd be after more than sheets. Meg hadn't paid much attention to the talk about the tramp at the time, because the postmistress, with a sugary smile, had asked if she'd heard from her father lately.

She left her little room and made her way through the shadows of the main attic, bumping against the ping-pong table. —Now I'll have a bruise on my hip on top of everything else, she thought.

Next she walked into her old dolls' house, Charles Wallace's rocking horse, the twins' electric trains. "Why must everything happen to me?" she demanded of a large teddy bear.

At the foot of the attic stairs she stood still and listened. Not a sound from Charles Wallace's room on the right. On the left, in her parents' room, not a rustle from her mother sleeping alone in the great double bed. She tiptoed down the hall and into the twins' room, pushing again at her glasses as though they could help her to see better in the dark. Dennys was snoring. Sandy murmured something about baseball and subsided. The twins didn't have any problems. They weren't great students, but they weren't bad ones, either. They were perfectly content with a succession of B's and an occasional A or C. They were strong and fast runners and good at games, and when cracks were made about anybody in the Murry family, they weren't made about Sandy and Dennys.

She left the twins' room and went on downstairs, avoiding the creaking seventh step. Fortinbras had stopped barking. It wasn't the tramp this time, then. Fort would go on barking if anybody was around.

—I'll make myself some cocoa, she decided. —That'll cheer me up, and if the roof blows, off at least I won't go off with it.

In the kitchen a light was already on, and Charles Wallace was sitting at the table drinking milk and eating bread and jam. He looked very small and vulnerable sitting there alone in the big old-fashioned kitchen, a blond little boy in faded blue Dr. Dentons, his feet swinging a good six inches above the floor.

"Hi," he said cheerfully. "I've been waiting for you."