by Tony Judt and Timothy Snyder

Offers a narrative of the intellectual history of the United States for the past one hundred years by discussing the ideas and thinkers that helped shape the century. 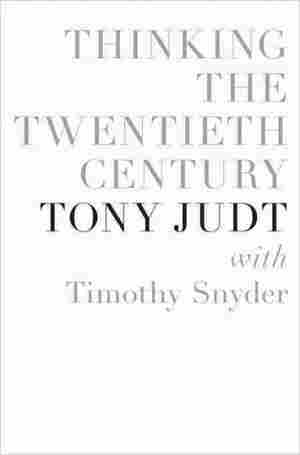 February 2, 2012 • The late British-American writer blends personal and political history in this brilliant final take on a century rife with ideological clashes.

The mainstream genetic story is that fascism arose from the uncertainties of the pre-World War I generation when confronted by the war and the immediate postwar period. What you then have is a warped and distinctively new kind of nationalism transfigured by the energy and violence of the First World War into a political movement of a new kind, a mass movement, potentially, of the right. Zeev Sternhell, by contrast, emphasizes that the pre-World War I attitudes towards democracy, or decadence, together with the experience of the war and the failure of the Left in the war, turn a whole generation towards fascism. In this account, the real origins of fascism, and above all, its economic policies and its critique of democracy, are on the left.

You don't have to choose between these stories. It's not difficult to find individuals who followed both trajectories. And it may also be that both of them are a little bit anachronistic. If you could stop the clock in 1913, the year before the outbreak of the First World War, and inquire after the political stance and likely future affiliations of the younger generation, you would see that the divide between the Left and the Right isn't quite the point. Most of the movements deliberately defined themselves as neither left nor right. They refused to be defined within the French revolutionary lexicon which had for so long provided the parameters for modern political geography.

Rather, they saw the debates within liberal society as themselves the problem rather than as containing a solution. Think of the Italian futurists in their manifestoes and their artistic endeavors of the decade before World War I. In France there was a survey, "Les jeunes gens d'aujourd'hui," (The Young People of Today), which became a sort of manifesto of the young right, although its authors didn't claim to set out that way. What young people had in common is a belief that only they can seize the century. We would like to be free, they asserted: we want to release the deep energies of the nation. In 1913 you wouldn't have known whether this sentiment was left or right: it would quite plausibly have served as a left-wing modernist manifesto — there has to be change, there will be radical departures, we must go with the present and not be confined by the past. But at the same time, these expressions of frustrated youthful impulses sound classically right in tone: national will, national purpose, national energy. The nineteenth century was the bourgeois century. The twentieth century would be the century of change, coming upon us so fast that only the young and uncommitted could hope to seize the day and go with it. Speed was of the essence: the airplane and the automobile had just been invented.

In Germany, everyone from vegetarian groups to bicycle clubs to hiking clubs to nature societies found themselves — with exceptions — leaning toward the nationalist right. Conversely, the very same sort of people in England — wearing remarkably similar clothes and taking similarly-motivated exercise — inclined towards the left: talking about William Morris wallpaper, lifting the working people to a higher cultural level, spreading knowledge about contraception and diet for the greater good of the masses, etc.

After 1913, there is the First World War itself, and then the application of the principle of national self-determination, and the Bolshevik Revolution. I wonder if we can't separate out some of these factors in the emergence of fascism by time and place.

What is surprising even in retrospect is that the violence of the First World War did not have the effect we would suppose today. It was precisely the bloody, deadly aspect of war which was so celebrated by those for whom it was the defining moment of their youth. When you read Ernst Jünger, or Drieu la Rochelle, or the angry responses to Erich Maria Remarque, you find that the retrospective celebration of togetherness in conflict gave the war a very special glow for many members of the Front Generation. Veterans were divided between those who harbored a lifelong nostalgie de la boue and those who were forever alienated from all forms of nationalist politics and militarism. The latter may have been in the absolute majority, especially in France and Britain; but they were decidedly not in the majority among intellectuals.

The Bolshevik Revolution took place in late 1917, so before the war's end. This means that even before the postwar period really began there was already the looming threat of a second disturbance: a European revolution facilitated and justified by the disruption of the war and the injustice (real or perceived) of the peace settlements. If you go country by country, starting with Italy, you see that without the threat of a communist revolution there would have been far less space for fascists to offer themselves as a guarantee of traditional order. Indeed fascism, at least in Italy, was uncertain as to whether it was radical or conservative. It fell to the right in large measure because of the success of its right wing in presenting fascism as the appropriate response to the threat of communism. Absent the specter of left-wing revolution, the left fascists might well have dominated. Instead, Mussolini had to purge them, as did Hitler ten years later.

Conversely, the relative weakness of the revolutionary Left in postwar Britain, France or Belgium restricted the credibility of right-wing efforts to exploit the communist bogey over the coming decade. In Britain, even Winston Churchill was ridiculed for his obsession with the Red Threat and the Bolsheviks.

Many of the fascists admired Lenin, admired his revolution, admired the Soviet state, and saw one-party rule as a model.

Ironically, the Bolshevik Revolution and the creation of the Soviet Union posed far trickier problems for the Left than they did for the Right. In the early postwar years, very little was known in Western Europe about Lenin and his revolution. Accordingly, there was a lot of self-serving abstract recasting of Russian developments in accordance with local preferences: this was a syndicalist revolution, an anarchist revolution, a Marxist socialism adapted to Russian circumstance, a temporary dictatorship, and so on. The Left had to worry that this revolution in a backward, agrarian country did not conform to Marx's predictions, and might therefore generate warped and even tyrannical outcomes. Whereas for the fascists, those aspects of Leninism which most troubled conventional Marxists — the emphasis on voluntarism and Lenin's hubristic willingness to accelerate history — were what they found most pleasing. The Soviet state was violent, decisive and firmly led from above: in those early years it was everything that future fascists longed for and found lacking in the political culture of their own societies. It confirmed for them that a party can make a revolution, seize a state and govern by force if necessary.

In those early years the Russian Revolution also generated effective and even beautiful propaganda. As time went on, moreover, the Bolsheviks had a distinctive knack for exploiting public places.

I would go further. The public face of fascism and communism was often strikingly similar. Mussolini's plans for Rome, for example, look frighteningly like Moscow University. If you knew nothing of the history of Nicolai Ceausescu's House of the People, how would you determine whether it was fascist or communist architecture? There was also a shared (and superficially paradoxical) conservatism of taste in the higher arts, after the initial enthusiasm of the revolutionary years. In music, in painting, in literature, theater and dance, communists and fascists were extraordinarily wary of innovation or imagination. By the 1930s, aesthetic radicals were as unwelcome in Moscow as they were in Rome or Berlin.

I'm struck that for the Romanian fascists, singing in public was very important. And I wonder if fascism doesn't depend — here comes a kind of Marxist argument about fascism — on a certain level of technological development, where people can be moved easily but information less so? After all, a chorus is a means of communication that makes sense before radio, which was scant in the interwar Romanian countryside.

We're at exactly the point when societies of Europe are entering the age of the masses. People can read newspapers. They work in very large agglomerations and are exposed to shared experiences — in school, in the military, traveling by train. So you have self-conscious communities on a grand scale, but for the most part nothing resembling genuinely democratic societies. Accordingly, countries like Italy or Romania were peculiarly vulnerable to movements and organizations that combined non-democratic form with popular content.

I think that this is one of the reasons why so few people understood them; certainly, their critics did not. Marxists could not find any "class logic" in fascist parties: therefore, they dismissed them as mere superstructural representatives of the old ruling class, invented and instrumentalized for the purpose of mobilizing support against the threat from the Left — a necessary but far from sufficient account of the appeal and function of Fascism.

It therefore makes sense that in the aftermath of World War II, with the establishment of stable democracies in much of Western and parts of Central Europe, fascism lost its purchase. In later decades, with the coming of television (and a fortiori the Internet), the masses disaggregate into ever-smaller units. Consequently, for all its demagogic and populist appeal, traditional fascism has been handicapped: the one thing that fascists do supremely well — transforming angry minorities into large groups, and large groups into crowds — is now extraordinarily difficult to accomplish.

From Thinking the Twentieth Century by Tony Judt and Timothy Snyder. Copyright 2012 by Tony Judt. Excerpted by permission of The Penguin Press, a member of Penguin Group Inc.