Hired along with Joe Pike to investigate the alleged kidnapping of a wealthy industrialist's son, Elvis Cole quickly disproves police theories and goes undercover to infiltrate a ring of professional border kidnappers — only to be abducted himself. 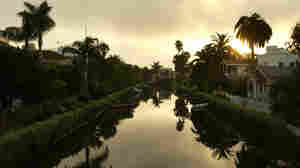 When people call a private investigator because someone they love is missing, especially a child, the fear bubbles in their voice like boiling lard. When Nita Morales called that morning about her missing adult daughter, she didn't sound afraid. She was irritated. Ms. Morales phoned because the Sunday Los Angeles Times Magazine published a story about me eight weeks ago, rehashing a case where I cleared an innocent man who had been convicted of multiple homicides. The magazine people came to my office, took a couple of pretty good pictures, and made me sound like a cross between Philip Marlowe and Batman. If I were Nita Morales, I would have called me, too.

Her business, Hector Sports & Promotions, was on the east side of the Los Angeles River near the Sixth Street Bridge, not far from where giant radioactive ants boiled up from the sewer to be roasted by James Arness in the 1954 classic, Them! It was a warehouse area now, but no less dangerous. Buildings were layered with gang tags and graffiti, and signs warned employees to lock their cars. Steel bars covered windows and concertina wire lined roofs, but not to keep out the ants.

That spring morning, 8:55 a.m., a low haze filled the sky with a glare so bright I squinted behind the Wayfarers as I found the address. Hector Sports & Promotions was in a newer building with a gated, ten-foot chainlink fence enclosing their parking lot.

A young Latin guy with thick shoulders and dull eyes came out when I stopped, as if he had been waiting.

"You the magazine guy?"

"That's right. Elvis Cole. I have a ten o'clock with Ms. Morales."

"I gotta unlock the gate. See the empty spot where it says Delivery? Park there. You might want to put up the top and lock it."

That would be me, flashing the ironic smile at their overkill battlestar security.

"For sure. They only steal clean cars."

That would be him, putting me in my place.

He shook his head sadly as I drove past.

"I had an old Vette like this, I'd show some love. I'd pop those dents, for sure."

That would be him, rubbing it in. My Jamaica yellow 1966 Corvette Stingray convertible is a classic. It's also dirty.

He locked the parking gate behind us, told me he was Nita Morales's assistant, and led me inside. We passed through an outer office with a counter for customers, and a man and woman at separate desks. The man and woman both looked over, and the man held up the Sunday magazine issue with my story. Embarrassing.

We passed through a door onto the shop floor where fifteen or twenty people were operating machines that sewed logos on baseball caps and photo-inked mugs. Nita Morales had a glass office on the far side of the shop where she could see the floor and everything happening there. She saw us coming, and stepped from behind her desk to greet the magazine guy when we entered. Tight smile. Dry hand. All business.

"The one where you look like a smart, determined detective who gets the job done."

I liked her immediately.

"Would you like something? Coffee or a soft drink?"

"Jerry, where's the swag bag? You left it in here, right?"

She explained as Jerry the Assistant handed me a white plastic bag.

"We made a little gift for you this morning. Here, take a look."

A large white T-shirt and a matching baseball cap were in the bag. I smiled at the cap, then held up the T-shirt. "Elvis Cole Detective Agency" had been silk-screened onto the front in black and red letters, with "world's greatest detective" in smaller letters below it. An emblem saying the same had been sewn on the front of the cap.

I put them back in the bag.

"This is very cool, but I haven't agreed to help you. You understand that, don't you?"

"You will. You're going to find her. It won't be hard for the World's Greatest Detective."

She got that from the magazine.

"The 'world's greatest' thing was a joke, Ms. Morales. The guy who wrote the article put it in the story like I meant it. I didn't. It was a joke."

"I have some things to show you. Give me a second. I have to get them together."

She dismissed the assistant, and returned to her desk while I looked around. Shelves along the wall opposite her desk were lined with mugs, cups, bobbleheads, T-shirts, caps, giveaway toys, and dozens of other promotional items. Want team shirts for your kid's soccer club? They could do it. Want the name of your insurance agency on cheap plastic cups for the Knights of Columbus barbeque? That's what they did. Photos of youth teams dotted the walls, the kids all wearing shirts made by Hector Sports.

"My husband. He started the company twenty-two years ago, silkscreening T-shirts. I run it now. Cancer."

"You must run it well. Business looks good."

She came around her desk so we could sit together on matching metalchairs. Nita Morales was in her mid-forties, built sturdy, and wore a conservativeblue business skirt and ruffled white shirt. Her sleek black hair showed no gray, and framed her broad face well. Her nails were carefully done, and her wedding ring was still in place, seven years later, this June.

She held out a snapshot.

"This is who you're going to fi nd. This is Krista."

Krista Morales had a heart-shaped face, golden skin, and a smile that dimpled her right cheek. Her eyes were deep chocolate, and her hair glistened with the deep black sheen of a crow's wing in the sun. I smiled at the picture, then handed it back.

"Beyond proud. Her father and I, we didn't graduate high school. I had no English until I was nine. This business, we built with sweat and the grace of God. Krista — "

She ticked off the points on her fingers.

She suddenly stopped, and stared through the glass wall into the shop.

Even with the angle, I saw her eyes glisten.

"They're good people, but you have to watch them."

"I understand. Take your time."

She cleared her throat as she pulled herself together, then Nita Morales's face darkened from a sunrise of pride to the iron sky of a thunderstorm. She put Krista's picture aside, and handed me a page showing a name and Palm Springs address. The name was Jack Berman.

"She went to Palm Springs seven days ago. With a boy. Her boyfriend."

She said "boyfriend" as if it were another word for "mistake."

She described the boyfriend, and didn't have anything good to say. A USC dropout without a job and little future. Just the type of boy who could derail her daughter's ambitions.

I glanced at the address.

"He lives in Palm Springs?"

"Somewhere in L.A., I think. His family has the house in Palm Springs, or it might belong to a friend, but I don't really know. Krista hasn't told me much about him."

Old story. The less Krista told her, the less she could criticize. I put the address aside.

"Okay. So how is she missing?"

"She went for the weekend. That's what she told me, and she always tells me where she's going and exactly how long she'll be gone. But she's been gone now for a week, and she won't return my calls or texts, and I know it's that boy."

"How long have Krista and that boy been together?"

Thinking about it seemed to sicken her.

"Six or seven months. I've only met him two or three times, but I don't like him. He has this attitude."