Accessibility links
The Righteous Mind NPR coverage of The Righteous Mind: Why Good People Are Divided By Politics and Religion by Jonathan Haidt. News, author interviews, critics' picks and more.

Why Good People Are Divided By Politics and Religion

Jonathan Haidt investigates the morality at the core of religion and politics, offering scholarly insight into the motivations behind the cultural clashes that are polarizing America.

NPR stories about The Righteous Mind 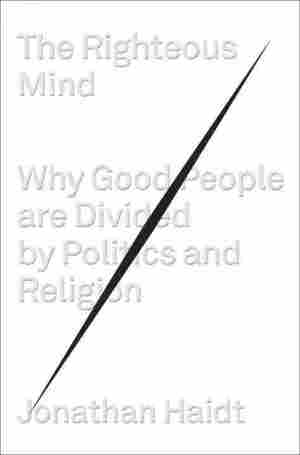 Why We Fight: The Psychology Of Political Differences

March 1, 2012 • The seemingly intractable differences between liberals and conservatives may have an evolutionary basis, argues Jonathan Haidt in his new book, The Righteous Mind.

"Can we all get along?" That appeal was made famous on May 1, 1992, by Rodney King, a black man who had been beaten nearly to death by four Los Angeles police officers a year earlier. The entire nation had seen a videotape of the beating, so when a jury failed to convict the officers, their acquittal triggered widespread outrage and six days of rioting in Los Angeles. Fifty-three people were killed and more than seven thousand buildings were torched. Much of the mayhem was carried live; news cameras tracked the action from helicopters circling overhead. After a particularly horrific act of violence against a white truck driver, King was moved to make his appeal for peace.

King's appeal is now so overused that it has become cultural kitsch, a catchphrase more often said for laughs than as a serious plea for mutual understanding. I therefore hesitated to use King's words as the opening line of this book, but I decided to go ahead, for two reasons. The first is because most Americans nowadays are asking King's question not about race relations but about political relations and the collapse of cooperation across party lines. Many Americans feel as though the nightly news from Washington is being sent to us from helicopters circling over the city, delivering dispatches from the war zone.

The second reason I decided to open this book with an overused phrase is because King followed it up with something lovely, something rarely quoted. As he stumbled through his television interview, fighting back tears and often repeating himself, he found these words: "Please, we can get along here. We all can get along. I mean, we're all stuck here for a while. Let's try to work it out."

This book is about why it's so hard for us to get along. We are indeed all stuck here for a while, so let's at least do what we can to understand why we are so easily divided into hostile groups, each one certain of its righteousness.

People who devote their lives to studying something often come to believe that the object of their fascination is the key to understanding everything. Books have been published in recent years on the transformative role in human history played by cooking, mothering, war ... even salt. This is one of those books. I study moral psychology, and I'm going to make the case that morality is the extraordinary human capacity that made civilization possible. I don't mean to imply that cooking, mothering, war, and salt were not also necessary, but in this book I'm going to take you on a tour of human nature and history from the perspective of moral psychology.

By the end of the tour, I hope to have given you a new way to think about two of the most important, vexing, and divisive topics in human life: politics and religion. Etiquette books tell us not to discuss these topics in polite company, but I say go ahead. Politics and religion are both expressions of our underlying moral psychology, and an understanding of that psychology can help to bring people together. My goal in this book is to drain some of the heat, anger, and divisiveness out of these topics and replace them with awe, wonder, and curiosity. We are downright lucky that we evolved this complex moral psychology that allowed our species to burst out of the forests and savannas and into the delights, comforts, and extraordinary peacefulness of modern societies in just a few thousand years. My hope is that this book will make conversations about morality, politics, and religion more common, more civil, and more fun, even in mixed company. My hope is that it will help us to get along.

BORN TO BE RIGHTEOUS

I could have titled this book The Moral Mind to convey the sense that the human mind is designed to "do" morality, just as it's designed to do language, sexuality, music, and many other things described in popular books reporting the latest scientific findings. But I chose the title The Righteous Mind to convey the sense that human nature is not just intrinsically moral, it's also intrinsically moralistic, critical, and judgmental.

The word righteous comes from the old Norse word rettviss and the old English word rihtwis, both of which mean "just, upright, virtuous." This meaning has been carried into the modern English words righteous and righteousness, although nowadays those words have strong religious connotations because they are usually used to translate the Hebrew word tzedek. Tzedek is a common word in the Hebrew Bible, often used to describe people who act in accordance with God's wishes, but it is also an attribute of God and of God's judgment of people (which is often harsh but always thought to be just).

The linkage of righteousness and judgmentalism is captured in some modern definitions of righteous, such as "arising from an outraged sense of justice, morality, or fair play." The link also appears in the term self-righteous, which means "convinced of one's own righteousness, especially in contrast with the actions and beliefs of others; narrowly moralistic and intolerant." I want to show you that an obsession with righteousness (leading inevitably to self-righteousness) is the normal human condition. It is a feature of our evolutionary design, not a bug or error that crept into minds that would otherwise be objective and rational.

Our righteous minds made it possible for human beings — but no other animals — to produce large cooperative groups, tribes, and nations without the glue of kinship. But at the same time, our righteous minds guarantee that our cooperative groups will always be cursed by moralistic strife. Some degree of conflict among groups may even be necessary for the health and development of any society. When I was a teenager I wished for world peace, but now I yearn for a world in which competing ideologies are kept in balance, systems of accountability keep us all from getting away with too much, and fewer people believe that righteous ends justify violent means. Not a very romantic wish, but one that we might actually achieve.