Placed in the custody of a conservative aunt in Montana after losing her parents in a car crash, teen Cameron secretly falls in love with her cowgirl best friend and is dispatched to a religious conversion camp when the truth about her sexual orientation is discovered. 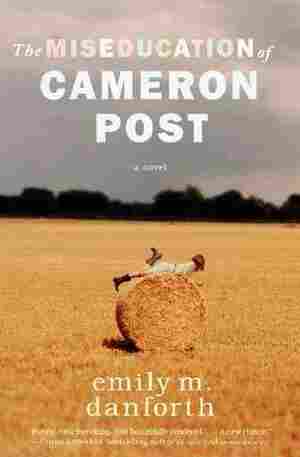 February 7, 2012 • In short succession, Cameron Post loses both parents to a car accident, is outed as a lesbian and is sent to a a religious camp to be "cured." But the heroine of The Miseducation of Cameron Post, a triumphant new young adult novel, is made of strong and irresistible stuff.

Sometime in late September Irene Klauson came to school with the kind of smile kids wear in peanut-butter commercials. She and her dad had been out building on their new corral and branding area. Irene said she was the one working the shovel when they first found it. A bone. A fossil. Something big.

"My dad's already called some professor he knows at Montana State," she told a few of us who were clustered around her locker. "They're sending out a whole team."

Within weeks scientists, "paleontologists," Irene would remind us, sounding like our fucking science book, had swarmed all over the Klausons' cattle ranch. The paper called it a hotbed for specimen recovery. A gold mine. A treasure trove.

Irene and I hadn't seen each other much since our robot-hug at my parents' funeral in June. Mrs. Klauson kept trying to arrange sleepovers and day trips to the mall in Billings, to a rodeo in Glendive, but I would back out at the last minute.

"We understand, sweetheart," Mrs. Klauson would tell me over the phone. I guess the "we" she was speaking of included Irene, but maybe she meant Mr. Klauson. "We're not going to stop trying though, okay, Cam?"

When, in late August, I had finally agreed to go with them to the Custer County Fair, I spent the whole evening wishing that I hadn't. Irene and I had done up the fair before — we'd done it up big. We'd buy the wristbands that let you ride all the rides you wanted. We'd eat graveyard snow cones — lime, orange, grape, cherry, mixed together — and pacos from the Crystal Pistol booth — seasoned beef in a cocoon of hot fry bread, the orange grease squirting and burning the insides of our cheeks. We'd wash everything down with lemonade from that stand with the wasps buzzing all around it. Then we'd make fun of the blue-ribbon craft projects and dance a wild jitterbug to whatever lame-o band they'd brought in. In years before, we thought we owned the fair.

But that August we haunted the midway like ghosts — stopping in front of the Tilt-A-Whirl, then the fishbowl game, watching like we'd already seen everything there was to see but couldn't quite pull ourselves away. We didn't talk about my parents, the accident. We didn't say much of anything at all. Everything was painted in ringing noises and flashing lights and shouting and screaming, crazy laughter, little kids crying, the smell of popcorn and fry bread and cotton candy thick in the air, but it all just sort of floated around me like smoke. Irene bought us tickets for the Ferris wheel, a ride we'd deemed too boring the year before, but it seemed like we should be doing something.

We sat in that metal car, our bare knees just touching. Even when we'd jerk them apart, they'd wind up magnetized again some moments later. We were closer together than we had been since the night her father knocked on her bedroom door. We were lifted up into the hot embrace of the ever-blackening Montana sky, the lights from the midway sluicing us in their fluorescent glow, a tinny kind of ragtime music plinking out from somewhere deep in the center of the wheel. Up on top we could see the whole of the fair: the tractor pull, the dance pavilion, cowboys in Wranglers leaning cowgirls built like sticks of gum up against pickups out in the parking lot. Up on top the air smelled less like grease and sugar, more like just-baled hay and the muddy waters of the Yellowstone as it lazed its way around the fairgrounds. Up on top it was quiet, everything squashed down below us, the loudest noise the squeak of the bolts as the wind shifted our car just so. Then we had to float back down into all of it, the whole midway pressed up against us, and I held my breath until we were back on top again.

Our third time up there Irene grabbed my hand. We stayed like that for one full rotation, saying nothing, fingers wound together, and for that forty seconds or so I pretended like things were just as they always were: me and Irene at the fair.

When we got back to the top again, Irene was crying, and she said, "I'm really sorry, Cam. I'm sorry. I don't know what else to say."

Irene's face was bright against the dark of the sky, her eyes all shimmery wet, pieces of her hair blown free from her ponytail. She was beautiful. Everything in me wanted to kiss her, and at the same time it felt like everything in me was sick. I pulled my hand away from hers and looked out over my side of the car, dizzy with nausea. I closed my eyes to keep from throwing up, and even then I could taste it. I heard Irene next to me saying my name, but she sounded like she was saying it from beneath a pile of sand. They had stopped the ride to let people off and on down below. We shifted in the wind. We started up again, moved a few clicks, stopped. Now I wanted to be back on the midway and in the rush of all that noise. Irene was still crying beside me.

"We can't be friends like we were before, Irene," I told her, keeping my eyes fixed on a couple all twined up in the parking lot.

The ride started up again. Our car jerked and we were lowered a few clicks. We stopped. Now we hovered half in the sky and half in the midway — level with the bright canvas tops of the game booths. I didn't say anything. I let the music plink. I remembered the feel of her mouth that day in the hayloft, the taste of her gum and the root beer we'd been drinking. The day she dared me to kiss her. And the very next day my parents' car had veered through the guardrail.

I didn't say anything. If Irene hadn't connected those dots herself, then it wasn't my place to do it for her, to explain that everybody knows how things happen for a reason, and that we had made a reason and bad, bad, unthinkable things had happened.