When an isolated Jewish village in Romania is threatened by war in 1939, the suggestions of a young child and a mysterious stranger who has washed up on the riverbank compels the community to reinvent itself while completely detaching from the known world, a creative plan that involves disturbing reassignments of jobs and families.

NPR stories about No One Is Here Except All Of Us 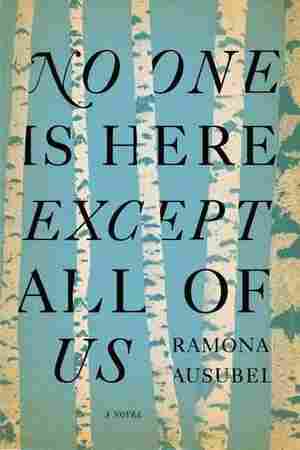 February 15, 2012 • Under the impending threat of Nazi invasion, a tiny Jewish town in 1939 Austria decides to reinvent its past. Ramona Ausubel's debut novel, No One Is Here Except All of Us, contains echoes of Gabriel Garcia Marquez and Isaac Bashevis Singer.

Excerpt: No One Is Here Except All Of Us

I am sitting with you on my lap, by the window. There are ice crystals on the glass. If I put my ear close enough I can almost hear them cracking and growing. It's not snowing now, but it has been all morning. Even though you have only been alive a few days, your story, our story, started a long time ago. Ours is a story I know, both the parts I saw with my eyes and the parts I did not. This kind of knowing comes from somewhere in my bones, somewhere in my heart. Someday, your children will ask what happened, and you will tell a new version, and this way, the story will keep living. The truth is in the telling.

It began in 1939, at the northern edge of Romania, on a small peninsula cupped by a muddy river. The days then were still and peaceful. Morning was for kneading bread, milking cows. We brought babies up to our lips. The baker had loaves in the oven in time for them to come out again when we were hungry for lunch. Children added, divided and multiplied numbers and got pats on the head for it. The banker counted rolls of coins and locked them away. The greengrocer filled his shelves with cabbages picked by the cabbage picker and potatoes pulled by teenage boys out of the earthy plots behind old women's houses. The old women liked to watch the muscles on the boys' arms pop into life, strands of a knot.

Nine families called the valley our home. In each direction beyond the cultivated hills were mountains dark with pine. We never thought of the river as anything but ours, though its name on maps was Dniester. Our village was complete and so were our lives within it; our ghosts were quiet under the earth and we were quiet above it.

Our lives belonged to this place — we did not want to move them elsewhere, even though we knew that, in another country not so far away, a man with a square mustache wanted to remake the world. People like us were forced to register all wealth and property. Passports were stamped with a large red J. A curfew was set. It was a new chapter of an old story. Somewhere, a temple exploded in flames. Czechoslovakia was seized, Warsaw. People like us were gathered in ghettos. All men were Israel and all women Sarah.

"They will surely stop this," we said. "The worst is over," we surmised. "Someone always wants to tell you it's the end of the world."

clean and pure. We had a story about a man and a woman and a few beautiful days in a garden, but none of us in the village remembered such a time. Our species might have growled at each other or spit into our palms. We might have rolled around on the thin-skinned earth, touched each other's closed eyelids or kneeled down at the pairs of footprints we were leaving everywhere. However life on earth started, we continued on until we forgot, time batting us with its paws and leaving the gristled meat of each day at our doorstep, while we headed out into the spinning world. For us, it was always the first time the particular baby had been born, the first time he shook his pickled little fists in the air. It was always the first today ...

One Friday evening, the sun hung heavy and waiting to drain, syrupy, into the wheat fields. Men walked home carrying evidence of the day — a scythe, a leather satchel full of needle-nose tools, a roll of receipts, a bag of cabbages, an empty lunch box. At the door, children like me had scrubbed cheeks that looked like juicy, pluckable fruit. "Shabbat shalom," we children said to our fathers. "Good Sabbath," the fathers said. On the table, a lace cloth. On the lace cloth, covered pots. "Shabbat shalom," the wives of husbands said through kisses.

At my house, a chicken leg cooked until meat fell off the bone into the soup. My brother had just carried wood inside before sundown and I was trying to figure out if winter clouds were frozen, or only the snow falling from them. My sister held a piece of cotton over the fingertip she had pricked with her sewing needle. This led the three of us to our favorite game — comparing wounds, the souvenirs of childhood. Moishe, the oldest at thirteen, had a bloom on the back of his calf from swimming into a log in the river. Regina, a year younger than Moishe and a year older than me, let a drop of deep red needle-pricked blood fall into her opposite palm. From a game of chase, I could boast a long branch-scratch across my cheek. Our skin was one map divided into three pages, the territory of our joy marked therein.

My mother twisted the fringe on the tablecloth into a knot that would not hold. She was reading a book about a futureless, midwinter love affair between two young Russians — a bright-cheeked boy about to enter the Czar's army and a beautiful, stupid girl. My mother frowned at the lovers because she knew they were doomed. She took it as a personal offense that they believed in something so hopeless. With each turn of the page, she twisted her hair faster.

"I hope he doesn't die until spring," she said. "She's too dumb to survive that kind of cold with a broken heart on top of it."

My father was not home yet, and the room was like a painting we had made for him. When the knob turned and he had had a chance to take the scene in, we fell back into action — Mother stood up and stirred the soup while the three of us children raced to show our father the evidence that we, too, had been alive all day long — blood on the cloth, firewood piled neatly and a question about the birth of snow.

"The most beautiful woman in the world," my father said, his lips pressed to my mother's hand. The room was rich with the smell of supper, and I placed one soft, old napkin at each of our places.

In our village, all of us — mothers and fathers, grandparents and children, uncles and great-aunts, the butcher, baker, saddlemaker, cobbler, wheat cutter, cabbage farmer — stood in circles around our tables and lit candles while we blanketed the room in prayer. All at once, we tugged at soft braids of bread, which gave way.

I walked to weekly prayers holding my father's hand in a drenching rain. The villagers nodded and smiled to each other, trying to appreciate our place on the turning earth. We concerned ourselves not with the world's many terrors, but with the most mundane of details. My mother said to my crazy aunt Kayla, "This is some kind of rain," and, "Glad I brought the wash in last night." She did not think, I wonder if this storm will last for the rest of our lives.

Kayla said, "Another day in paradise," and took the black top hat off my uncle Hersh's head to shake away rainwater pooling in the brim.

There was an old story that the prophet Elijah was responsible for rain and thunder — his only distraction while he waited for the great and terrible day of the Lord. "Yeah, yeah, we hear you," the baker said to the heavens.

Our village was too small for a proper temple — just over a hundred people — but we made do with the healer's house. In his kitchen: the women and children, quiet, watching rain gather strength out the window. I took note of the puddles forming, wishing I was outside jumping in them, delightedly dirtying everything my mother had scrubbed clean. The mothers had gently stretched the rules of the Sabbath over the years to allow them to do small, easy work while they listened to the service. Several were mending socks, several were knitting. Aunt Kayla had a half-finished needlepoint picturing a basketful of bubble-gum-pink babies wrapped in a pale blue blanket. The babies did not have eyes yet, neither did they have hands. Blind little monsters. Next to Kayla, whose envy seeped out of her like slime, the banker's rounded, pregnant wife tucked a sweater between her shoulder and head and closed her eyes. At her feet, her eldest son, Igor, herded his little brothers and sisters into a tidy circle, distributed toy teacups around and pretended to fill them up.

In the sitting room the men prepared to stoke the coals of faith. But the healer fidgeted. A newspaper in his pocket rustled when he took it out. "There's something we need to discuss," he said nervously. "Before we start." He unrolled it on the floor. WAR. 11 am, SEPTEMBER 3rd, 1939, it said across the front. The butcher turned from picking dried blood out of his nails. The skinny, bespectacled jeweler thumbed his pocket watch. The greengrocer patted his slippery, bald head. The barber read the words out loud, a crack splitting his voice.

"It's our day of rest," the widow said, indignant.

"This was weeks ago already," the healer said softly. He took a folded square of newsprint from his vest pocket. He opened it, and it bloomed like a flower. He began to read. "The Jewish people ought to be exterminated root and branch. Then the plague of pests would have disappeared in Poland at one stroke."