Accessibility links
King Peggy NPR coverage of King Peggy: An American Secretary, Her Royal Destiny, and the Inspiring Story of How She Changed an African Village by Peggielene Bartels and Eleanor Herman. News, author interviews, critics' picks and more.

An American Secretary, Her Royal Destiny, And The Inspiring Story Of How She Changed An African Village

by Peggielene Bartels and Eleanor Herman

Title
King Peggy
Subtitle
An American Secretary, Her Royal Destiny, And The Inspiring Story Of How She Changed An African Village
Author
Peggielene Bartels and Eleanor Herman

Documents the story of an American secretary who was declared the monarch of a small fishing village on Ghana's central coast, recounting the challenges she faced in improving local circumstances, providing education and countering regional corruption. 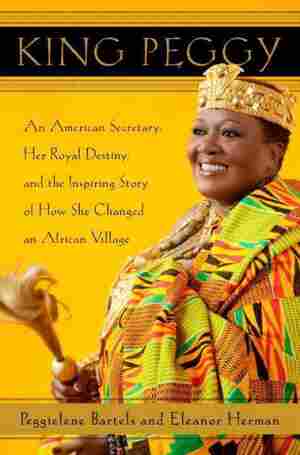 February 19, 2012 • In her new book, Peggielene Bartels describes going from secretary at the U.S. Embassy to king of a fishing village in Ghana. Dividing her time between Otuam and Washington, D.C., she straddles two cultures — and says she loves every bit of it.

When the council meeting ended at six, the sun was just rising and the world outside was silver. The elders returned to their fields to do some work before the day became too hot. Peggy went to her room to rest a bit and saw a line of children with heavy metal buckets of water on their heads trudging down the path from the bore hole behind the house. Some of them were headed for her kitchen.

Auntie Esi stood next to Peggy as she gazed out the window. "How far do they walk?" Peggy asked.

"There are only two bore holes, so the kids that live furthest away have to walk about a half hour in each direction."

"An hour for a single bucket," Peggy said quietly.

"And some kids make two or three trips before and after school. Some walk for six hours a day."

"Is the water clean at least?"

Auntie Esi shrugged. "It's not clean if you haul it from the pond. That water is a yellowish-brown, and that's what the entire town had to use when the pipes first broke in 1977. But the local government representatives built two bore holes shortly after that which provide very clean water, though it costs money. A few pennies a bucket."

Peggy scowled. "You mean they charge for clean water?"

Auntie Esi nodded. "The pumps break down a lot, so they use the money to pay for repairs."

"And the people who can't afford the bore hole water drink the yellowish-brown water?"

Auntie Esi nodded again. "They don't get sick from it, though. For hundreds of years before the British brought piped water, people in Otuam got all their water from the pond. Many believe the goddess of the pond purifies the water and keeps them healthy."

Peggy sighed, a deep sigh that came from the soul and rumbled through her entire body. Evidently the pond contained one of the seventy-seven gods and goddesses known to protect Otuam. But even so, no American king could allow her people to drink that disgusting water. And besides, it was well known that sometimes nature gods and goddesses left their ancient spots without a word of warning. If the goddess left, those drinking the water would sicken and even die. She would have to get those kids more bore holes, free bore holes, and eventually fix the pipes. How on earth was she going to afford it?

Auntie Esi put her weathered hand on Peggy's shoulder. "You will fix the water later," she said. "Remember the sparrow, who builds her nest one twig at a time. We are going to eat breakfast now, and after that we are going to give you your first royal etiquette lesson. You don't want to disgrace the stool by doing something inappropriate for a Ghanaian king." After breakfast, the aunties taught Peggy how to walk majestically. A king, they said, was never to show any hurry. The whole world waited for a king. Flapping around here and there like a chicken was undignified.

Auntie Esi strolled at a glacial pace down the hall, head up, shoulders back. "Like this, Nana. You bounce around too much and go too fast."

"In the US, if I walked that slowly I would be hit by a car," Peggy pointed out. "No one there would wait for me to cross the street. They would run me down, and as I bounced on the asphalt they would keep on going so they wouldn't be late for a meeting."

Auntie Esi smiled. "But there are very few cars in Otuam, and here they wouldn't run over their king. Try it again, slowly."

Peggy sighed. Give just a hint of a smile, they said, showing regal serenity. Shoulders relaxed. Head held high. Chin up. Slow, straight, determined steps. Self-consciously, she walked back and forth in front of them, like an awkward aspiring model training for the runway.

"Hold your chin higher!" said another.

"Don't frown?" Peggy asked. "What if I see something I don't like?"

"Don't frown!" Auntie Esi repeated. "You can make a mental note of the problem and deal with it later."

"And you can't eat or drink in public. It's unseemly for a king to be shoving things into her face. Plus, if there is a witch in the crowd watching you she can make you choke to death on whatever you're consuming."

Peggy had heard about the no-eating-in-public rule, though she was unaware it had to do with witches. It made sense, though, that witches, known as vengeful, jealous creatures, would want to harm a king, especially one who stood for the good. Witches created havoc for the sheer malicious pleasure of it, and you never knew who in your village was a witch. Sudden illnesses, childhood deaths, accidents: they might all be traced back to the kindly old grandmother next door or the jovial uncle down the street. Only a traditional priest, using tried and true rituals, could determine if bad luck was caused by the ancestors punishing selfish behavior or by a witch making trouble for good people, and then prescribe the proper rituals to take care of it.

Peggy sighed again. As king, she had to worry whether Uncle Joseph would haunt her for not burying him in a timely manner. She had to remain vigilant against evil spirits who might zoom into her. And now she had to defend herself against spiteful jealous witches who could be anywhere. Not eating or drinking in public was simple compared to these more troubling issues.

"In Otuam I will abide by this rule," she said. "But in the US, we all work so much that we have to grab a bite in public sometimes because when we get home it is too late to cook. And no one there knows I am a king."

"They know at the embassy. One of them might be a witch. And even if they aren't, it would be undignified to stuff your face even there."

Witches. At the embassy. Looking back on her twenty-nine years there, Peggy realized this could explain a lot of things.

"Argue in public?" she said, all wide-eyed innocence. Surely they hadn't heard anything of her arguments at the embassy. "Me?'

Cousin Comfort chimed in, "Nana, we all know that even since you were a small child, when someone misbehaves, you can't let it go."

"When you see an injustice," Cousin Comfort continued, "you are like a village dog with his jaws locked on a bone. You just don't give it up. But as king you will have to deal with these things in the council chamber, and not yell at people on the street or beat them with brooms." The aunties all laughed at that one.

Auntie Esi said, "And if you are wearing the crown and want to say a crude thing, you have to take it off before you speak so as not to dishonor it."

"And there's one more thing," Auntie Esi added. "It is not regal for a king to always be running off to the bathroom. When you have official events, we will give you a special dish that takes away the urge to urinate for the entire day. Still, it is best not to drink much before or during. Just a little water so you don't faint in the heat."

The heat. Though it was still early, the delicious coolness of the night had vanished, replaced by a stultifying miasma of sticky air. During the etiquette lesson, Peggy and her aunties had glowed at first, then perspired, and now the sweat was running down their faces in rivulets.

Peggy knew that the best drink to stave off the heat was beer, which Ghanaians drank in the morning as the heat rose. But beer was also the very drink to make you most want to run to the toilet. Peggy remembered an American comedian who once said, It's good to be da king. Except in Otuam the king would have to be thirsty, and hot, with a bursting bladder and witches putting hexes on her. Maybe it wasn't always good to be the king of Otuam.

"And another thing," Auntie Esi said, "As an American, you probably brought deodorant. But here people cut a lemon in half and rub the two halves all over their bodies. They let the lemon juice sink in, and a while later they bathe with soap and water. This works better than deodorant." For lunch they had the staple food of Otuam – fresh fish deep fried, on white rice, and covered with a spicy onion and tomato sauce. They would be eating it for lunch and dinner for Peggy's entire stay. In the US she often didn't think twice about the wide range of food she had and would have complained if she had to eat the same thing all day long. Africans could enjoy the same meal again and again and be grateful for it.

"By God's grace, the people here are never hungry," Auntie Esi explained as they dove into their meal. "They are very poor, and don't possess much, and they have to haul water. But there is plenty of food. Nana, you should see the dozens of fishing canoes that come in every morning, their nets heavy with fish. And the farms produce beautiful pineapples, papayas, coconuts, plantains, and cassavas."

That was indeed a blessing. While the other problems were vexing, hunger among Peggy's people would have devastated her. The people of Otuam would never be hungry, and living in Ghana they would certainly never be cold.

From King Peggy: An American Secretary, Her Royal Destiny, and the Inspiring Story of How She Changed an African Village by Peggielene Bartels and Eleanor Herman. Copyright 2012 by Peggielene Bartels and Eleanor Herman. Excerpted by permission of Doubleday, a division of Random House Inc. All rights reserved. No part of this excerpt may be reproduced or reprinted without permission in writing from the publisher.