An Indian's Journey Through Reservation Life

The author of The Hiawatha presents an insider chronicle of the history of reservations and contemporary Native American life that challenges misconceptions about sovereignty, treaty rights and natural resource conservation. It explores topics ranging from political tensions and casinos, to crime and cultural preservation. 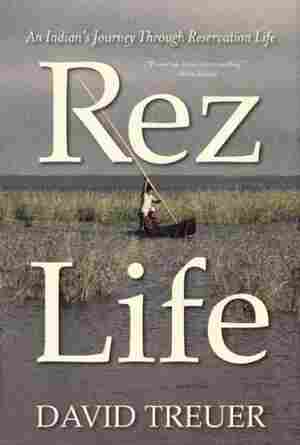 February 20, 2012 • Stories about life on Native American reservations often focus on alcoholism, drugs, violence and poverty. In Rez Life, David Treuer shows the brighter side: "There might be more hardship, but there's more joy," he says.

In northern Minnesota, not far from the headwaters of the Mississippi River, you may see a sign. From a passing car it is easy to miss: in the summer the trees that march over fields and the ditch grass that crowds the road threaten to overwhelm it; in the winter, when the snow has been pushed from the road and has leveled off the ditches, the sign sometimes blends too well with the snow to be seen at all. Seen or not, the sign reads: WELCOME TO THE LEECH LAKE INDIAN RESERVATION HOME OF THE LEECH LAKE BAND OF OJIBWE PLEASE KEEP OUR ENVIRONMENT CLEAN, PROTECT OUR NATURAL RESOURCES NO SPECIAL LICENSES REQUIRED FOR HUNTING, FISHING, OR TRAPPING.

If you're driving — as since this is America is most likely the case — the sign is soon behind you and soon forgotten. However, something is different about life on one side of it and life on the other. It's just hard to say exactly what. The landscape is unchanged. The same pines, and the same swamps, hay fields, and jeweled lakes dropped here and there among the trees, exist on both sides of the sign. The houses don't look all that different, perhaps a little smaller, a little more ramshackle. The children playing by the road do look different, though. Darker. The cars, most of them, seem older. And perhaps something else is different, too.

You can see these kinds of signs all over America. There are roughly 310 Indian reservations in the United States, though the Bureau of Indian Affairs (BIA) doesn't have a sure count of how many reservations there are (this might say something about the BIA, or it might say something about the nature of reservations). Not all of the 564 federally recognized tribes in the United States have reservations. Some Indians don't have reservations, but all reservations have Indians, and all reservations have signs. There are tribal areas in Brazil, Afghanistan, and Pakistan, among many other countries. But reservations as we know them are, with the exception of Canada, unique to America. You can see these signs in more than thirty of the states, but most of them are clustered in the last places to be permanently settled by Europeans: the Great Plains, the Southwest, the Northwest, and along the Canadian border stretching from Montana to New York. You can see them in the middle of the desert, among the strewn rocks of the Badlands, in the suburbs of Green Bay, and within the misty spray of Niagara Falls. Some of the reservations that these signs announce are huge. There are twelve reservations in the United States bigger than the state of Rhode Island. Nine reservations are larger than Delaware (named after a tribe that was pushed from the region). Some reservations are so small that the sign itself seems larger than the land it denotes. Most reservations are poor. A few have become wealthy. In 2007 the Seminole bought the Hard Rock Café franchise. The Oneida of Wisconsin helped renovate Lambeau Field in Green Bay. And whenever Brett Favre (who claims Chickasaw blood) scored a touchdown there as a Packer, a Jet, or a Minnesota Viking, he did it under Oneida lights cheered on by fans sitting on Oneida bleachers, not far from the Oneida Nation itself.

Indian reservations, and those of us who live on them, are as American as apple pie, baseball, and muscle cars. Unlike apple pie, however, Indians contributed to the birth of America itself. The Oneida were allies of the Revolutionary Army who fed U.S. troops at Valley Forge and helped defeat the British in New York, and the Iroquois Confederacy served as one of the many models for the American constitution. Marx and Engels also cribbed from the Iroquois as they developed their theories of communism. Indians have been disproportionally involved in every war America has fought since its first, including one we're fighting now: on July 27, 2007, the last soldiers of Able Company 2nd-136th Combined Arms battalion returned home to Bemidji, Minnesota, after serving twenty-two months of combat duty in Iraq. At the time Able Company was the most deployed company in the history of the Iraq War and was also deployed in Afghanistan and Bosnia. Some of the members of Able Company are Indians from reservations in northern Minnesota.

Despite how involved in America's business Indians have been, most people will go a lifetime without ever knowing an Indian or spending any time on an Indian reservation. Indian land makes up 2.3 percent of the land in the United States. We number slightly over 2 million (up significantly from not quite 240,000 in 1900). It is pretty easy to avoid us and our reservations. Yet Americans are captivated by Indians. Indians are part of the story that America tells itself, from the first Thanksgiving to the Boston Tea Party up through Crazy Horse, the Battle of the Little Bighorn, and Custer's Last Stand. Indian casinos have grown from small bingo halls lighting up the prairie states into an industry making $14 billion a year. No one in America today is untouched by our lives — from a schoolchild learning about the birth of his or her country to the millions of Americans who have lost (and sometimes won) money in an Indian casino.

Whites have not just been captivated by us; they've been captured. In 1790, when he was only ten years old, John Tanner was captured from his family's home in Kentucky by the Shawnee. Later, he was sold to an Ojibwe family as a slave and traveled with this family as far north and west as the Little Saskatchewan River. (My tribe, the Ojibwe, has been called Chippewa, Ojibway, and Chippeway — but Ojibwe is our name for ourselves). He spent his life among the Ojibwe and eventually married an Ojibwe woman. As an adult he was reunited with his birth family, but he was uncomfortable out East and went back to his Indian home as soon as he could. Then there is the story of Mary Jemison. She was also taken captive, along with a neighbor and her brothers, also by Shawnee, in 1758. Her brothers and another captive were scalped en route to Fort Duquesne (in modern-day Pittsburgh). Mary survived. She married a Delaware. But, afraid that she would be stolen back, the young couple moved to the Genesee Valley in what is now upstate New York. Mary's husband died and she remarried a Seneca and had many children with him. She never went back to "white society." Many captives didn't go back, preferring life with Indians.

That is exactly what many people whose lives are intertwined with Indians say today. My father, after escaping Austria and the Holocaust in 1938, fled to the United States with his parents. After much wandering and one marriage and three children he settled just off the Leech Lake Reservation in northern Minnesota. Here he felt safe for the first time in his life. More than that, he felt he had found, with his new friends and new family, something that had eluded him all the years before. He devoted his life (and still devotes it) to the community he has come to call his own, and is as passionate today about the rights and respect owed to Indians as he was when he moved to Indian country in the 1950s.