Saying No, Breaking Ranks, and Heeding the Voice of Conscience in Dark Times

An exploration of what motivates individual acts of courage and conscience in dangerous circumstances. It shares the inspiring stories of unlikely resisters while offering insights by psychologists and neuroscientists. 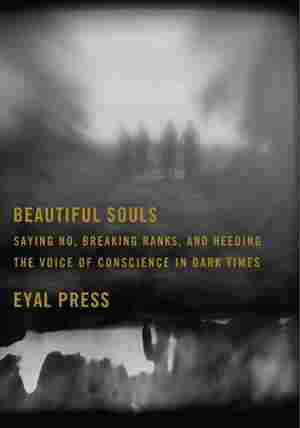 March 1, 2012 • In Beautiful Souls: Saying No, Breaking Ranks, and Heeding the Voice of Conscience in Dark Times, journalist Eyal Press writes about four ordinary people who took great risks to help others.

About a mile beyond the main square in the village of Jozefow, in eastern Poland, several dozen wooden stakes poke out among the weeds and bushes on a patch of forest strewn with pinecones and covered in velvety green moss. The stakes are nestled in a thicket of pines on the outskirts of the village, across the road from a murky pond. They would be easy to miss, rising a mere foot or two above the ground, but surrounding them is a waist- high band of blue-and-white ribbons festooned around the trunks of some of the neighboring pines. On the still summer day I followed a footpath through the trees to the edge of this ringed enclosure, the forest was eerily quiet, as though in deference to the villagers whose names were listed on the small, mud-stained notices pinned to the wooden stakes. Sheathed in plastic, the notices were inscribed with hexagonal Jewish stars, Hebrew lettering, and a date — 13/7/42.

Early that morning in 1942, before daylight broke, Jozefow was equally still. Then a convoy of trucks rattled by. They came from Bilgoraj, roughly eighteen miles to the west, carrying the men of Reserve Battalion 101, a division of the German Order Police whose members announced their presence by rousing the village's eighteen hundred Jewish inhabitants from their homes. The villagers were taken to a marketplace, where the male Jews of working age were separated out — they were destined for a labor camp. Most of the others — women, children, elderly people — were driven in trucks to the edge of a path leading into the woods, marched inside in small groups, and forced to lie face down in rows. The soldiers lined up behind them, placed the tips of their carbines at the base of their targets' necks, and, against the wail of screams that soon echoed through the forest, fired. The first shots rang out in the morning and continued into the night, a marathon of murder that left the woods littered with corpses and body parts. In the shade of the pines, skullcaps were torn off heads. Soldiers emerged from the wilderness splattered in blood, pausing for an occasional smoke before circling back with a fresh batch of victims.

In the knapsack that I carried on my own trek into the forest was a copy of the book Ordinary Men, by the historian Christopher Browning, a study of the battalion that swept through Jozefow that includes a chilling account of the massacre. I'd read the book long before visiting the scene of the crime but the details had stayed with me, both because of something startling it revealed and because of something I remember feeling it had left out, something I wanted to know more about. The startling revelation concerned not the shootings but a moment that preceded them, when the commander of the battalion, Major Wilhelm Trapp, gathered his men in a semicircle to deliver an address. As one might expect, Trapp reminded the soldiers, only a quarter of whom were members of the Nazi Party, that Jews were the enemies of Germany. Then he announced that if any of the older men did not feel up to participating in the operation, they could refrain. There was a pause, and a soldier stepped forward. About a dozen more followed.

It is an arresting moment, a brief but pregnant exchange that upends the notion that the rank-and-file soldiers who took part in the massacre had no alternative but to participate. They did not join the firing squads because they had to. They joined because they chose to, which raises the question of what ultimately drove them to kill. Browning traces the answer to the fear of standing apart from the group: not taking part in the operation meant leaving the "dirty work" to one's comrades and being seen as casting negative judgment on one's nation and peers, something most of the soldiers in the battalion were loath to do, particularly for the sake of people who were, after all, Jews.

But there is another, equally compelling question that has gone comparatively ignored: namely, why a few ordinary men considered Major Trapp's offer and turned in their guns. Why, even in situations of seemingly total conformity, there are always some people who refuse to go along.

This is a book about such nonconformists, about the mystery of what impels people to do something risky and transgressive when thrust into a morally compromising situation: stop, say no, resist. The extreme circumstances that prevailed among the German soldiers tasked with hunting down and murdering Jews in villages such as Jozefow during World War II are, fortunately, something most of us can only imagine being caught up in. Yet there is a reason our imaginations are often drawn to such scenarios — why few of us have failed to wonder at some point whether the impulse to refuse would have gripped us if we'd stood in the shoes of ordinary Germans back then, and, if so, whether we would have had the nerve to act on it. Wondering this is not, in fact, a purely speculative exercise, owing to an unresolved tension that runs through most societies, and for that matter most people's minds. We've all arrived at junctures where our deepest principles collide with the loyalties we harbor and the duties we are expected to fulfill, and wrestled with how far to go to keep our consciences clean. As far as necessary to be true to ourselves, a voice inside our heads tells us. But there are other voices that warn against turning on our community, embarrassing our superiors, or endangering our careers and reputations, maybe even our lives and the lives of our family members.

Excerpted from Beautiful Souls: Saying No, Breaking Ranks, and Heeding the Voice of Conscience in Dark Times by Eyal Press. Copyright 2012 by Eyal Press. Excerpted by permission of Farrar, Straus and Giroux, LLC.