A Social History Of The Store-Bought Loaf

In this lively history of bakers, dietary crusaders and social reformers, Aaron Bobrow-Strain shows that America's century-old, love-hate relationship with the humble, puffy loaf says a lot about who we are and what we want our society to look like. 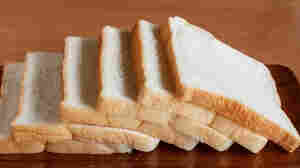 From a scapegoat for the "sapping" of the "white race," to a symbol of modern engineering, to a target of the counterculture movement: White bread's been a social lightning rod time and again. iStockphoto hide caption

November 3, 2015 • From a scapegoat for the "sapping" of the "white race," to a symbol of modern engineering, to a target of the counterculture movement: White bread's been a social lightning rod time and again. 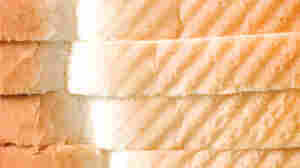 American History Baked Into The Loaves Of White Bread

March 4, 2012 • From the racially charged Pure Food movement to the countercultural revolution of the 1960s, white bread has been at the spongy, store-bought heart of American food politics.

American History Baked Into The Loaves Of White Bread

And which side does an object turn toward dreams? . . . It is the side worn through by habit and patched with cheap maxims. —Walter Benjamin

Is This Stuff Even Food?

Supermarket white bread can pick up difficult bits of broken glass, clean typewriter keys, and absorb motor oil spills. Squeezed into a ball, it bounces on the counter. Pressed into my palate and revealed in a big gummy grin, it gets giggles from my kids, who can also use it to sculpt animal shapes. But should they eat it? Among its two dozen ingredients, the loaf on my desk contains diammonium phosphate, a yeast nutrient and flame retardant produced when ammonia and phosphoric acid react. Is this stuff even food?

Be careful how you answer that question. Perhaps more than any other food in the United States, what you think of sliced white bread says a lot about who you are. Over the past hundred years, it has served as a touchstone for the fears and aspirations of racial eugenicists, military strategists, social reformers, food gurus, and gourmet tastemakers. The 1960s counterculture made white bread an icon of all that was wrong with Amerika, and 1970s style arbiter Diana Vreeland famously proclaimed, "People who eat white bread have no dreams" — by which she meant that they don't dream the right dreams, the up-to-date, hip dreams. Because, through its long history, few foods have embodied so many dreams as industrial white bread, particularly during times of recession, war, and social upheaval.

In writing this book, I set out to uncover the social dreams (and nightmares) played out in battles over industrial white bread. I wanted to understand how one food could inspire so much affection and so much animosity; how something so ordinary could come to symbolize both the apex of modern progress and the specter of physical decay, the promise of a better future to come and America's fall from small-town agrarian virtue. And I wanted to know how those battles over bread shaped America and its fraught relationship with food.

This turned out to be quite difficult. As important as it has been — both as sustenance and symbol — bread is not something that typically gets written about in diaries, described in letters, or remembered in oral histories. As social reformer Eleanor Bang reflected in 1951: "Bread? Of course. There it is for breakfast, for lunch, for dinner in a rhythm as regular as the ticking of our electric clocks — so regular we'd notice it only if it stopped." Unlike other bewitching icons of industrial eating that mark the past century and a half — unlike Twinkies, TV dinners, Jell-O, and Jet-Puffed anything — bread was, and is, just bread. Of course. Industrial white bread may have been as much a marvel of modern industry and space age food chemistry as any other product, but it was also the ultimate background food, rarely discussed — except when it went wrong.

As a result, uncovering bread's place in American society required wide-ranging and creative detective work. My sources range from the letters of early twentieth-century food reformers to the records of Allied occupation forces in postwar Japan (detailing how teaching Japanese schoolchildren to eat white bread would improve their "democratic spirit"). Finding this material took me to far-flung libraries and archives where I read the personal papers of social reformers, advertising executives, food scientists, and industrial designers as well as the records of numerous government agencies. I traced the early history of industrial baking at the Brooklyn and New York historical societies, and spent a week in Manhattan (Kansas) immersed in the archives of the country's oldest baking science school. I visited Chillicothe, Missouri (the "Home of Sliced Bread"), and Mexico City (the home of Grupo Bimbo, one of the world's most powerful industrial baking conglomerates). Then I pored over more than a hundred years of bread advertisements and women's magazine advice columns. Perhaps most importantly, small-town newspapers, consumer marketing studies, oral histories, and community cookbooks provided invaluable insight into the silent space between expert advice and daily diet. And, through all this, I began to understand that dreams of good bread and fears of bad bread are not innocent. They channel much bigger social concerns.

This is a book about one commodity — industrial white bread — that has played an incredibly important, and largely unnoticed, role in American politics, diet, culture, and food reform movements, but it is not another story of how one food "saved the world." Rather, it's a history of the countless social reformers, food experts, industry executives, government officials, diet gurus, and ordinary eaters who have thought that getting Americans to eat the right bread (or avoid the wrong bread) could save the world — or at least restore the country's moral, physical, and social fabric. Sadly, this turned out to be the difficult story of how, time and time again, well-meaning efforts to change the country through its bread ended up reinforcing forms of race, class, and gender exclusion — even when they also achieved much-needed improvements in America's food system.

Anyone paying attention to the rising cries for slow, local, organic, and healthy food today — the growing demands for food justice and restored community that mark our own exciting moment — will find the trials and tribulations of 150 years of battles over bread surprisingly contemporary. In them, you will see all the contradictory expressions of our own food concerns: uplifting visions of the connection between good food and healthy communities, insightful critiques of unsustainable status quos, great generosity of spirit, and earnest desires to make the world a better place — but also rampant elitism, smug paternalism, misdirected anxieties, sometimes neurotic obsessions with health, narrow visions of what counts as "good food," and open discrimination against people who choose "bad food." Fluffy white industrial bread may be about as far from the ideals of slow, local, organic, and health food reformers as you can get today. But, in many ways, we owe its very existence to a string of just as well-meaning efforts to improve the way America ate. Perhaps learning this history can help us avoid the pitfalls of the past.