Discoveries And Triumphs In The Newborn ICU

Dr. Adam Wolfberg, a specialist in high-risk obstetrics and father of a child born prematurely, brings readers into the complex world of newborn intensive care, detailing current scientific practices and discoveries and exploring the profound emotional and ethical issues raised by advancing technology. 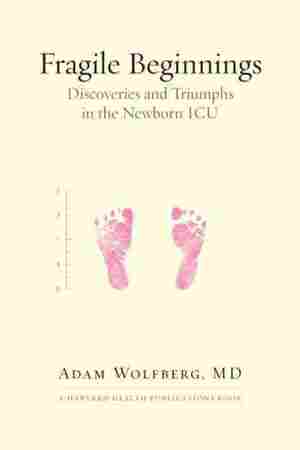 March 8, 2012 • In 1963, President John F. Kennedy's son Patrick was born prematurely and died of a respiratory problem that is now routinely treated. In the 50 years since, extraordinary advancements have been made in the field of neonatal intensive care. Dr. Adam Wolfberg explores those triumphs in his new book.

First, the air had been punctuated by the staccato of surgeons requesting instruments and ordering maneuvers while they struggled to free our child from Kelly's abdomen. Then, the chatter of the neonatologists coordinating their resuscitation efforts filled the space. Now a hush fell on the operating room. Grim in the wake of an imperfect delivery, the obstetricians methodically set about restoring Kelly's anatomy, layer by layer, in a practiced routine they had done hundreds of times.

"Zero Monocryl," one said softly, unhurriedly asking for the deep blue suture to close the uterus.

"How about something to take the edge off?" the anesthesiologist asked. He had already drawn up a syringe of the antianxiety medication Ativan, and he injected it into Kelly's IV. She was soon asleep under the kind, sedating influence of the drug.

I sat quietly by her side, holding — really gripping — her hand. In front of me, the blue curtain rose, protecting the sterility of the operative field and shielding the bloody surgical space from Kelly's view. I knew what was going on behind the blue curtain; the surgical repair was straightforward, even mundane. I also knew that one floor above us, Larissa was trying to survive. I could imagine what was going on up there too. It wasn't mundane.

"Give us a couple of hours to get her settled," one of the nurses had said as the team of pediatricians left the OR. "If anything unexpected happens, I promise I'll come and find you."

What she meant was, If Larissa's going to die, we'll come tell you.

Outside the operating room, the stocky nurse pushing the wheeled incubator took charge, like an engineer driving through a rail yard. "Excuse us," she barked loudly to anyone who even threatened to get in the way. The large purple breathing bulb made a whishhh sound when the respiratory therapist squeezed it and a droning vzzzzz sound when he released it.

The nurse reached for the keycard hung on her ID necklace and jammed it into the slot next to the elevator call button. The door opened within seconds as the key overrode the elevator computer system and summoned the nearest car. "Please step out and wait for the next one," she commanded to the people in the elevator. An elderly couple on their way to visit their newest grandson hurried to comply.

The team rode up, and when they got off the elevator, the nurse drove straight to the new-arrival section of the NICU where a station had been hurriedly prepared for Larissa. Nearby, tiny babies lay surrounded by large machines that provided oxygen, intravenous nutrition, antibiotics, fluid — whatever was needed to sustain life. Here, under bright lights, cared for by an army of nurses and doctors, babies who need help spend their first hours, weeks, and sometimes months.

The roof to Larissa's incubator was swung up, and, in a practiced motion, six hands placed Larissa, her breathing tube, and the spaghetti of monitoring wires onto the table where the neonatologists would do their best to re-create Kelly's womb for our daughter.

The table, designed for maximum access and positioned at a comfortable height for standing physicians and nurses, was surrounded on three sides by low Plexiglas walls that were just high enough to prevent Larissa and the syringes, suction bulb, and assorted equipment from rolling off. The back of the table rose up to support a heat lamp, which glowed orange overhead. Whenever Larissa's temperature fell below 98.6 degrees Fahrenheit, the probe that was stuck to her chest would signal the warmer to increase the radiance of the lamp. To one side, ribbed plastic tubing extended from a square, beige, wheeled ventilator and snaked onto the table. Carefully holding on to Larissa's breathing tube, the respiratory therapist disconnected the plastic purple bulb and attached her tube to the ventilator tubing. The therapist weighed at least three hundred pounds and was built like a linebacker, and his hands were bigger than Larissa's entire body; it was nothing short of amazing that this man's beefy fingers were able to connect the delicate tubes that kept the tiniest of babies alive. With everything in place, he hit a switch to turn on the ventilator and checked the settings carefully. Then he easily moved on to the next sequence of tasks, his heavy breaths mingled with the soft but sure whooshing of the ventilator as it pumped the oxygen that Larissa needed to survive.

With the orange heat lamp shining down on her, Larissa lay naked but for a doll-size diaper as she was connected to an increasing number of tubes and wires by adult hands moving in and out from the sides of the table. One of the doctors cut another few millimeters off Larissa's umbilical cord, exposing the vein and two arteries, and threaded tiny catheters down these easily accessible vessels. Normally, these blood vessels, which are a fetus's lifeline in the uterus, clot off and are never used again once the umbilical cord is clamped and cut immediately after delivery. But in the case of a very premature baby, doctors use the umbilical arteries to measure blood pressure, and the umbilical vein to infuse fluids and medications.

Another doctor put a tiny flashlight behind Larissa's arm and used the light to identify a vein; it made a dark line against the illuminated red-yellow of her nearly translucent arm. Guided by this backlight, he managed to stick a needle into this tiny vessel, and then he threaded a catheter up inside her arm so that Larissa could receive fluid and liquid nutrition.

The respiratory therapist, relieved of his job of squeezing the purple canister, briefly disconnected the breathing tube from the ventilator and squirted a type of fluid called surfactant down the tube; this would help keep her lungs from collapsing. One of the less experienced nurses, still tentative in her motions, was allowed to place electrodes on Larissa's chest and attach them to machines that measured her heart rate and respiratory rate. She also carefully taped a tiny red photodiode to Larissa's foot; this would measure the oxygen level in her blood. Once all the lines, tubes, and machines were attached, two hands elevated Larissa while two more slid her into a plastic bag up to her neck; this was to limit fluid loss through her translucent skin.

Two hours later, I left Kelly in the surgical recovery room and walked upstairs to the NICU. I showed my hospital identification and was waved in.

"Baby Lowery?" I asked an orderly in the hallway, referring to Kelly's last name, which would be Larissa's until discharge.

She pointed across the unit. I walked through the crowded room, dodging ventilators, medication carts, and laundry bins. I passed a dozen babies lined up on both sides of the room, each one surrounded by equipment.

These were the sickest children, mostly confined to their raised tables or incubators. A mother sat in a rocking chair, pushed right up next to one of the incubators. She wore the loose-fitting sweatshirt common among women recently postpartum, whose abdomens still protrude. Her hands and her arms disappeared up to her elbows inside the incubator through the two portholes in the side of the device, and with the index finger of one hand she stroked her son's leg. Her face was pressed to the Plexiglas of the incubator, and I could make out only the occasional soft word she spoke through the glass: "You can do it, Jason. ... Mommy loves you so much. ... What a good boy."

At the farthest end of the room, portable blue barriers created a makeshift semblance of privacy around one of the incubators and a couple of rocking chairs. A hush seemed to surround this part of the otherwise busy NICU, and nurses and staff members were noticeably quieter when they cared for the babies near those partitions. While I made my way across the room, a nurse respectfully stuck her head around the barrier, exchanged a couple of words with another nurse, and then withdrew. As I got closer, I could hear faint sobbing coming from behind the screens. Soon a black-clad hospital chaplain emerged, head bowed after giving last rites, and walked purposefully toward the exit. This was a place where birth and death often came close together.