by Claude Lanzmann and Frank Wynne

A first book by the chief editor of Jean-Paul Sartre and Simone de Beauvoir's Les Temps Modernes traces his life in film and journalism, describing his early experiences as an underground soldier in occupied Paris, his affair with de Beauvoir and the making of his seminal documentary Shoah.

NPR stories about The Patagonian Hare 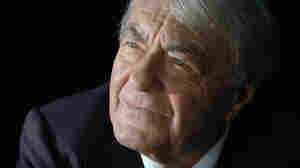 March 20, 2012 • Claude Lanzmann's memoir, recently translated into English, details his career as a journalist and filmmaker, his friendships and his loves — especially his long relationship with writer and feminist Simone de Beauvoir. Lanzmann, now 87, spent 12 years working on his 1985 Holocaust documentary, Shoah.

The guillotine — more generally, capital punishment and the various methods of meting out death — has been the abiding obsession of my life. It began very early. I must have been about ten years old, and the memory of that cinema on the rue Legendre in the 17th arrondissement in Paris, with its red velvet seats and its faded gilt, remains astonishingly vivid. A nanny, making the most of my parents' absence, had taken me, and the film that day was L'Affaire du courrier de Lyon [The Courier of Lyons], with Pierre Blanchar and Dita Parlo. I have never known or tried to discover the name of the director, but he must have been very proficient, for there are certain scenes that I have never forgotten: the attack on the Lyon courier's stagecoach in a dark forest, the trial of Lesurques, innocent but condemned to death, the scaffold erected in the middle of a public square, white, as I remember it, the blade swooping down. Back then, as during the Revolution, people were still guillotined in public. For months afterwards, around midnight, I would wake up, terror-stricken, and my father would get up, come into my room, stroke my damp forehead, my hair wet with anxiety, talk to me and calm me. It was not just my head being cut off: sometimes I was guillotined lengthwise, in the way a pit-sawyer cuts wood, or like those astonishing instructions posted on the doors of goods wagons that, in 1914, were used to send men and animals to the front: 'men 40 — horses (lengthwise) 8 ', and which, after 1941, were used to send Jews to the distant chambers of their final agony. I was being sliced into thin, flat slivers, from shoulder to shoulder, passing through the crown of my head. The violence of these nightmares was such that as a teenager and even as an adult, fearful of reviving them, I superstitiously looked away or closed my eyes whenever a guillotine was depicted in schoolbooks, historical writing or newspapers. I'm not sure that I don't still do so today. In 1938 — I was thirteen — the arrest and confession of the German murderer Eugen Weidmann had all of France on tenterhooks. Weidmann had murdered in cold blood, to steal and leave no witnesses, and, without needing to check, I can still remember the names of some of his victims: a dancer, Jean de Koven, a man named Roger Leblond, and others whom he buried in the forest of Fontainebleau, in the aptly named Bois de Fausses-Reposes — the Woods of False Repose. The newsreels, in great detail, showed the investigators searching the coppices, digging up the bodies. Weidmann was condemned to death and guillotined before the prison gate at Versailles in the summer before the war. There are famous photographs of the beheading. Much later I decided to look at them, and did so at length. His was the last public execution in France. Thereafter, the scaffold was erected inside the prison courtyard, until 1981 when, at the instigation of François Mitterrand and the then Minister of Justice, Robert Badinter, the death penalty was abolished. But, at thirteen, however, Weidmann, Lanzmann — the identical endings of his name and mine seemed to portend for me some terrible fate. Indeed, as I write these words, even at my supposedly advanced age, there is no guarantee that it will not still be so. The death penalty might be reinstated, all it would take is a change of regime, a vote in parliament, a grande peur. And of course the death penalty survives in many places: to travel is dangerous. I remember discussing it with Jean Genet, because of the dedication of Notre-Dame-des-Fleurs [Our Lady of the Flowers] to a young man, guillotined at the age of twenty — 'Were it not for Maurice Pilorge, whose death continues to poison my life ...' — and also because Weidmann's name opens the book: 'Weidmann appeared to you in a five o'clock edition, head swathed in white strips of cloth, a nun and yet a wounded airman ...', and mentioning my abiding fear that I would die by the so-called bois de justice [the guillotine]. He replied brusquely, 'There's still time.' He was right. He didn't much like me; I felt exactly the same about him.

I have no neck. I have often wondered, during nocturnal moments of acute bodily awareness spent anticipating the worst, where the blade would have to fall to behead me cleanly. I could think only of my shoulders and my aggressively defensive posture, forged gradually night after night by the nightmares that followed the primal scene of Lesurques' death, which transformed them into a fighting bull's morillo, neck muscles so impenetrable the blade glances off, sending it back to its point of origin, each rebound weakening its original power. It is as though, over time, I had drawn in on myself so as to leave for the blade of la veuve — the widow, as Madame Guillotine is colloquially known — no convenient place and no opportunity for it to make one. In the boxing world, they would say I grew up in a 'crouch', with a curvature of the torso so marked that an opponent's fists slide off without the punches truly hitting home.

From The Patagonian Hare: A Memoir by Claude Lanzmann. Copyright 2009 by Editions Gallimard. Translation copyright 2012 by Frank Wynne. Excerpted by permission of Farrar, Straus and Giroux.