Down on their luck, the Tooting family buys an old camper van and begins repairing it, but after installing an engine that once belonged to an extraordinary car, they are off to find other original parts, pursued by a sinister man who wants Chitty for himself. Illustrated by Joe Berger. 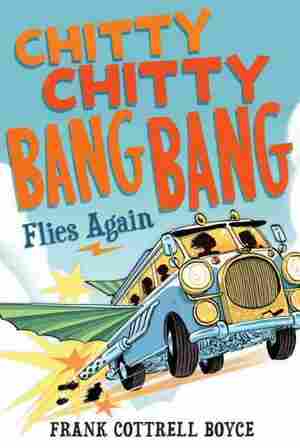 'Chitty Chitty Bang Bang' Gets Back On The Road

March 7, 2012 • Ian Fleming's beloved flying car is back for more adventures. The British author's nieces asked children's writer Frank Cottrell Boyce to pick up where their uncle left off. Boyce took the responsibility seriously; he says he felt like he'd borrowed a "national treasure."

'Chitty Chitty Bang Bang' Gets Back On The Road

Most cars are just cars. Four wheels. An engine. Some seats. They take you to work. Or to school. They bring you home again. But some cars — just a few — are more than cars.

Some cars are different.

Some cars are amazing.

And the Tooting family's car was absolutely definitely not one of those.

It was so undifferent and so unamazing, in fact, that on the last day of the summer term when Lucy and Jem strolled out of the school gates and into the holidays, they walked straight past it. They didn't even notice it was there until their father popped his head out of the window and shouted, "Lucy! Jem! Jump in! I'm giving you a lift!"

"I don't need a lift," said Lucy, who was fifteen years old. "I need to be alone." Lucy always dressed completely in black, ever since last Christmas.

"Good Big News? Or Bad Big News?" said Jem, who was a bit of a worrier.

"All Big News is tragic," said Lucy sadly. "Nothing good is ever news."

Little Harry hated being strapped into his car seat. As he struggled to get free, Jem said, "You have to be clipped in, in case we crash."

"Are you going to tell us the Big Bad News now?" asked Lucy.

"It's not bad news. First we'll collect Mum from the shop."

"You don't usually collect me from the shop," said Mum as she climbed into the front seat. "Has something terrible happened?"

"Oh, no," said Mum. "Not the lovely red remote-control one that Santa brought you?"

"Can we stop talking about the dinosaur and talk about my news, please?" said Dad.

They got the Celebration Banquet for Four with an extra portion of chicken in black bean sauce for Lucy — who liked to eat black food whenever she could. When it was all set out on the table, the lovely spicy smells curling into the air around them, Dad finally told them the excellent Big News.

"Children," he said, "and, wife — my Excellent Big News is that" — he looked around the table, enjoying their expectant faces — "I never have to work again! What do you think of that!?"

"That was unexpected," said Lucy.

"Because," said Dad, "I have been sacked! Hooray!"

"I'm pleased that you're pleased," said Mum, "but are you sure it's entirely excellent news?"

"If you have no job," said Jem, "doesn't that mean we'll be really poor and starve to death?"

"No," said Dad. "It means we'll be able to do whatever we want and go wherever we like. The word today," he said, "is opportunity."

"I want my dinosaur back!" yelled Little Harry.

Dad explained the details. "Since the day I left school," he said, "I have worked in a factory making tiny, tiny parts for really big machines. But now the company has a new contract making even tinier parts for even bigger machines. My fingers are just too big for the job. So they said they had to let me go."

"When you say anywhere," said Jem, "does that include abroad?" No one in the Tooting family had ever been abroad before.

"Anywhere," said Dad, "means anywhere in the world." He smiled at Mum. "And, dearest, you get first pick."

Mum blushed a little and said, "Well, you always promised to take me to Paris."

"Me?" said Lucy. "I don't want to go anywhere. I want to spend my days in my room, now that I've finally got it the way I like it." Lucy had got rid of all the ornaments and dancing certificates from her room, painted the walls and her bookcase black. Dyed her duvet. And her pillow slip.

"You must want to go somewhere?"

"I suppose I wouldn't mind seeing the pyramids. I could sit in the desert looking at the Sphinx and think about dead pharaohs, with their gold and jewels, lying there in the desert night. Dead, dead, dead."

"I can see we're going to need to plan our route," said Dad. "Go and get that map of the world from your bedroom wall."

"The map of the world isn't on my bedroom wall anymore," said Lucy.

"The colours were too bright — yellow and blue and pink. Pastel colours depress me."

"But I've had that map since I was a little boy. I won it for being punctual. It says so on the back. What have you done with it?"

"It was completely out-of-date. There were countries on there that were shut down years ago and new countries that weren't even mentioned. Instead of France, it had something called Gaul."

"It was supposed to be a historical map."

"That's what I said, out-of-date. I put it in the recycling."

"What? Do you know how often I had to be punctual to win that prize?"

"Why would you want an out-of-date map when there's really good satnav in the car? A map like that could be dangerous."

"If you tried to use it, you would get lost. People get lost all the time. Cities get lost, even."

"What cities get lost?" said Lucy.

"El Dorado. Camelot. Troy. Xanadu. Atlantis. They were all big cities once, and now no one knows where they are. They got lost. I bet it was because of out-of-date maps."

"Maps go out-of-date," said Dad, "because countries change. And people can go out-of-date because their fingers are too big for the machines. That doesn't mean they should be put in a bin. Just because something's out-of date doesn't mean it's of no use."

"And it's all fine, anyway," said Mum, "because I took the map out of the recycling again. Here it is .... " She spread it out on the table and touched the back of Dad's hand. "I've always been very proud of your father's punctuality," she said. "It's one of his most attractive qualities, along with his boyish smile." Dad smiled his boyish smile. "Now, Jem, you said you wanted to go to El Dorado. Show your dad where it is on the map."

"I don't know where it is on the map. That's the point. It's lost. I was making a point about how easy it is to get lost. If a big city can get lost, a small person can get lost."

"It's somewhere around here," said Dad, pointing to South America.

"Well, then," said Mum, "we'll stop and ask when we get to the general area. The locals are bound to know. Little Harry, what about you?"

"And last of all, the North Pole for me."

"That's the South Pole," said Jem. "You've got the map upside down. See what I mean about how easy it is to get lost?"

"Can you really drive to the North Pole in a car?" said Lucy. "Wouldn't you be overwhelmed by blizzards and buried in avalanches and left untouched and frozen in the snow for hundreds of years, like fish fingers? Dead, dead, dead."

"No," said Jem. "Because our car's got four-wheel drive and a super de-icer. And satnav. It can go anywhere in the whole world and never get stuck and never get lost."

That's when the doorbell rang.

At the door was a nice young man in a blazer with a plastic identity card clipped to his lapel. "Hello," said Dad, reading the badge, "Bernard."

"Not any more you don't." Bernard smiled again.

"Perhaps you also forgot that this car — with its satnav, four-wheel drive, and super de-icer — belongs to the company?"

"Keys, please." Still smiling, Bernard put his hand out, and Dad gave him the car keys. Bernard drove away in the car. Mum put her hand gently on Dad's shoulder. "Never mind," she said.

He stood and watched until the car had disappeared around the corner.