Genius, Obsession, and How Leonardo Created the World in His Own Image

Title
Da Vinci's Ghost
Subtitle
Genius, Obsession, and How Leonardo Created the World in His Own Image
Author
Toby Lester

Title
Da Vinci's Ghost
Subtitle
Genius, Obsession, and How Leonardo Created the World in His Own Image
Author
Toby Lester

Da Vinci's Ghost recounts the intellectual journey behind the creation of Leonardo da Vinci's Vitruvian Man and how the drawing represents the momentous period in Western history when the Middle Ages gave way to the Renaissance.

Discovering Da Vinci, A Writer's Identity And The 'IKEA God'

November 5, 2012 • This week brings a notable story collection by Megan Mayhew Bergman and a memoir of art, alcoholism and family life by Jeanne Darst. Eric Weiner has an account of his spiritual journey, and Toby Lester explores Leonardo da Vinci's coming of age. 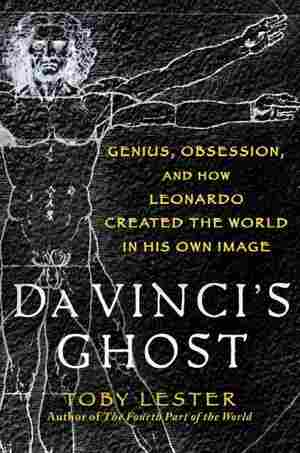 'Da Vinci's Ghost' Lives On In The Vitruvian Man

March 8, 2012 • Most people are familiar with Leonardo da Vinci's Vitruvian Man: A nude man, with his arms and legs outstretched, inside a square within a circle. In his book Da Vinci's Ghost, author Toby Lester tells the story of da Vinci's quest to create an image of the perfectly proportioned human.

'Da Vinci's Ghost' Lives On In The Vitruvian Man

On the surface, the story seems straightforward enough. Writing at the dawn of the Roman imperial age, Vitruvius proposed that a man can be made to fit inside a circle and a square, and some fifteen hundred years later Leonardo gave that idea memorable visual form. But there's much more to the story than that. Vitruvius had described his figure in an architectural context, insisting that the proportions of sacred temples should conform to the proportions of the ideal human body — the design of which, he believed, conformed to the hidden geometry of the universe. Hence the importance of the circle and the square. Ancient philosophers, mathematicians, and mystics had long invested those two shapes with special symbolic powers. The circle represented the cosmic and the divine; the square represented the earthly and the secular. Anybody proposing that a man could be made to fit inside both shapes was therefore making an age-old metaphysical statement. The human body wasn't just designed according to the principles that governed the world. It was the world, in miniature.

To an almost astonishing degree, this idea, known as the theory of the microcosm, was the engine that had powered European religious, scientific, and artistic thought for centuries, and in the late fifteenth century Leonardo hitched himself to it in no uncertain terms. If the design of the human body really did reflect that of the cosmos, he reasoned, then by studying it more carefully than had ever been done before — by using his unparalleled powers of observation to peer deep into his own nature — he might expand the scope of his art to include the broadest of metaphysical horizons. By examining himself in minute detail, he might see and understand the world as a whole.

Vitruvian Man sums up that dream in powerful visual form. At a superficial level, the picture is simply a study of individual proportions. But it's also something far more subtle and complex. It's a profound act of philosophical speculation. It's an idealized self-portrait in which Leonardo, stripped down to his essence, takes his own measure, and in doing so embodies a timeless human hope: that we just might have the power of mind to figure out how we fit into the grand scheme of things.

The story of Vitruvian Man is actually two stories: one individual and one collective. The individual story, of course, is Leonardo's own. Set in the years immediately leading up to 1490, it's the story, as best I've been able to reconstruct it, of how Leonardo came to draw his famous picture — and it's a surprisingly unfamiliar tale. Like Vitruvian Man, Leonardo himself has become such a popular icon, deployed for so many different purposes, that he's rarely encountered as an actual person. Instead, he's almost entirely a creature of myth: a prophetic, maguslike figure invested with almost superhuman traits who completely transcended his age. As one modern historian has put it, echoing the words of countless others, "Leonardo, the complete man of the Renaissance, paces forth, as far removed from medieval man as imagination can conceive." But that's not the figure you'll encounter in this book. The Leonardo who drew Vitruvian Man turns out to be every bit as medieval and derivative as he is modern and visionary — and he's all the more complex, fascinating, and mysterious for that.

The second story unfolds on a much broader scale. It's the story of how Vitruvian Man first came into being as an idea more than two thousand years ago and then slowly made its way across the centuries toward its fateful encounter with Leonardo. It's a saga of grand proportions, spanning centuries, continents, and disciplines, in which people and events and ideas tumble into and out of view: the architect Vitruvius, age-old theories of the cosmos, ancient Greek sculptors, the emperor Augustus, Roman land-surveying techniques, the idea of empire, early

Christian geometrical symbolism, the mystical visions of Hildegard of Bingen, Europe's great cathedrals, Islamic ideas of the microcosm, art workshops in Florence, Brunelleschi's dome, the humanists of Italy, court life in Milan, human dissections, Renaissance architectural theory, and much more. At times the story ranges far afield, but never, I hope, without good reason: each new episode, and each new chapter, is designed to help put Leonardo and his picture into deeper perspective.

By definition, the two stories start out at a considerable remove from each other. I've constructed them in very different ways, one as a personal story, told at the ground level, and the other as a story of ideas, surveyed from a considerable altitude. But as the book progresses, the two slowly wrap themselves around each other until, in the final chapter, they become one and the same. Both are strongly visual, which is why this book includes so many period drawings and diagrams. Flip through the pages quickly from front to back, and you should be able to see those images flickering to life, almost like movie stills being sped up, as they gradually evolve into Leonardo's Vitruvian Man.

One damp, cold morning in March, a security guard at the Gallerie dell'Accademia, in Venice, asked me to follow her through the museum's grand exhibit halls. For almost two hundred years the Accademia has owned Vitruvian Man, and I had come to see it in person.

Off we went. Without once looking back, the guard strode purposefully through room after room, weaving her way through packs of museum visitors gazing at some of the most celebrated paintings in the history of Italian art. I scurried to keep up. Eventually we reached the back of the museum, where we were met by another guard. He asked us to wait while he radioed ahead for clearance, then directed us into a cordoned-off stairwell and waved us upward.

Vitruvian Man only very rarely appears on display at the Accademia. Most of the time the picture is kept out of harm's way, in a climate-controlled archive not accessible to the general public. To see it you have to request special permission from the director of the museum's Office of Drawings and Prints, Dr. Annalisa Perissa Torrini, who, if she deems your request worthy, will guardedly schedule a private viewing.

When at last I was ushered into the archive, I found her waiting for me. We greeted each other and made pleasant small talk for a short while. Then, moving to a nearby display table, we got down to business. Dr. Perissa Torrini donned a pair of slightly tattered white cotton gloves and asked me to do the same. She walked over to a bank of flat file drawers, slid one open, and lifted out a manila conservation folder, which she carried back and gingerly placed on the table. Straightening up, she looked over at me.

"Okay," she said, a smile creeping onto her face. "Are you ready?"