If Walls Could Talk

If Walls Could Talk

An Intimate History of the Home

An architectural and cultural history of home life in England covers a wide range of topics from cooking and oral hygiene to sex and marriage, describing such subjects as why medieval people slept sitting up and why people feared fruit for centuries. By the author of The Courtiers. 25,000 first printing.

NPR stories about If Walls Could Talk 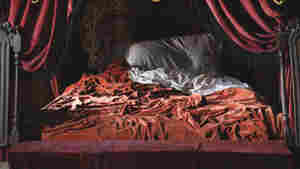 'If Walls Could Talk': A History Of The Home

March 13, 2012 • Why did the flushing toilet take centuries to catch on? When did strangers stop sharing beds? And how did people brush their teeth with fish bones? Historical curator Lucy Worsley details the intimate history of the bedroom, bathroom and kitchen in her new book.

'If Walls Could Talk': A History Of The Home

Excerpt: 'If Walls Could Talk'

There are few nicer things than sitting up in bed, drinking strong tea, and reading.

Once upon a time, life's great questions were: would you be warm tonight and would you get something to eat? Under these circumstances, the central great hall of a medieval house was a wonderful place to be: safe, even if smoky, stinking and crowded. Perhaps its floor was made only of earth, but no one cared if the hall was full of company, warmth and food. Many people, then, were glad to doss down here. At night the medieval great hall became a bedroom.

A medieval great household was rather like a boarding school in which most of the pupils were grown up. They came from humble homes to live and learn at a centre of culture and security for the surrounding area. They served their lord by day, and slept on his floor by night. If you had a particular job in the household, you perhaps slept in your daytime place of work: we hear of laundry maids sleeping in the laundry, porters sleeping in their lodges, and kitchen staff bedding down near the fireplaces where they worked all day. A Tudor inventory made at Sutton Place in Surrey shows that the 'lads' of the kitchen slept in the same room as the household's fool. The one place you didn't sleep was a bedroom.

So nearly everyone shared their sleeping space with numerous other people. You'll often read that medieval people had no notion of privacy. Certainly it should not be assumed that it exists in every culture. In modern Japan, for example, privacy is much less important than in the West. Lacking their own word for the concept, the Japanese have adopted an English one, 'praibashii'.

Medieval lives were much more communal than those of today, but that's not to say that they contained no notion of privacy at all. People still took the trouble to seek out private moments, such as the times when lord and lady lay curtained off in their four-poster bed, or when a courting couple walked out into the woods in merry Maytime, or when a person knelt in prayer in an oratory. The private book, the locked and private box containing personal treasures, or the private oratory were private places indeed, even if smaller or less accessible than a modern person might expect.

On the other hand, there was, indeed, less 'private life'. Society was structured so that one's position in the hierarchy was obvious and explicit. There was a 'Great Chain of Being' extending down from God, through his angels, to the Archbishop of Canterbury and other notables such as dukes, before normal people got a look-in. But at least we lesser mortals could take comfort from being placed above the animals, the plants, and finally, the stones. Such a chain inevitably restricted people's hopes of bettering their social position, but it also comforted them. Those higher up adopted airs of superiority, but they also had clear and pressing responsibilities towards those lower down.

In this communal but strictly hierarchical world, literacy was rare; so, therefore, was diary-writing and introspection; so was time free from getting and making food. God, not the self, was the centre of the world. Understanding what it might have been like to inhabit such a mental world is the ultimate aim of historians' efforts in researching and constructing medieval furniture and the rooms it stood in.

Medieval beds for most people consisted of hay or straw ('hitting the hay' had a literal meaning) stuffed into a sack. These sacks might be made out of 'ticking', the rough striped cloth still used to cover mattresses today. A mattress might also be known as a 'palliasse', from 'paille', the French word for straw. John Russell in c.1452 gives instructions for making a bed for several sleepers, 9 ft long by 7 ft wide. He says you should collect 'litter' (presumably leaves, not crisp packets) to 'stuff' the mattress.

Then the stuffing should be distributed evenly to remove the worst lumps. Each simple mattress should be 'craftily trod . . . with wisps drawn out at feet and side'. It sounds rather uncomfortable, but presumably it was softer than the floor.

And snuggling up together in a big bed was normal, indeed desirable, for warmth and security. A French phrase book for use by medieval travelers included the following useful expressions: 'you are an ill bed-fellow', 'you pull all the bed clothes' and 'you do nothing but kick about'. The sixteenth-century poet Andrew Barclay describes the horrible sounds that could be expected in a roomful of sleepers:

Some buck and some babble, some cometh drunk to bed,

Some brawl and some jangle, when they be beastly fed;

Some laugh and some cry, each man will have his will,

Some spew and some piss, not one of them is still.

Never be they still till middle of the night,

And then some brawleth, and for their beds fight.

Because it was so easy to annoy or inconvenience your bedfellows, custom and etiquette developed about how to take your position in a communal bed. An observer of life in early nineteenth-century rural Ireland noted that families lay down 'in order, the eldest daughter next the wall farthest from the door, then all the sisters according to their ages, next the mother, father and sons in succession, then the strangers, whether the travelling peddler or tailor or beggar'. Thus the unmarried girls were wisely kept as far as possible from the unmarried men, while husband and wife lay together in the middle.

William Harrison's is the best-known description of servants' beds in the Elizabethan age: 'if they had any sheets above them, it was well, for seldom had they any under their bodies, to keep them from the pricking straws that ran oft through the canvas'. Yet his comments must be taken with a pinch of salt because Harrison actually thought that a bit of discomfort was good for you. Like conservative commentators in all periods, he was bemoaning the fact that Englishmen had turned into softies, wanting all kinds of unmanly luxuries. Pillows, he said, were formerly 'thought meet only for women in childbed'; how times had changed when even men wanted pillows, instead of making do with 'a good round log under their heads'.

But sleeping in the great hall wasn't good enough for the actual blood family who owned the medieval manor house. The lord and lady might retire from the company of hoi polloi into an upstairs room adjoining the hall. Often it was called simply 'the chamber', sometimes the 'bower' or 'solar'. (The 'chamber' was overseen by a special servant called the 'chamberlain'.) In the chamber at Penshurst Place in Kent, one of Britain's most complete surviving medieval houses, a peephole or squint gives a view down into the hall below so that the boss could see what his employees were getting up to. He literally 'looked down' upon his servants.