A family saga spanning half a century in the lives of a restless and ambitious clan starts with the story of backwoods youth-turned-railroad magnate Joe O'Brien, who becomes the patriarch of a family that sees the first airplanes, two world wars, and the election of JFK.

NPR stories about The O'Briens 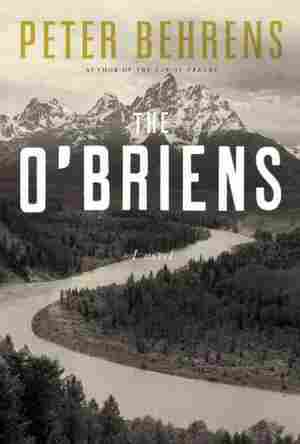 March 17, 2012 • Peter Behrens' new novel starts with a teen, ends with a railroad magnate, and covers plenty of ground in between. Canada's nation-building is the background of this sweeping family saga.

The old priest waltzed with each of the O'Brien children while his pretty housekeeper, Mme Painchaud, operated the Victrola. She was a widow whose husband had been killed at the sawmill. Sliding the disc from its paper sleeve, she carefully placed it on the turntable and started turning the crank. As the needle settled onto the disc, a Strauss waltz began bleating from the machine's horn, which resembled, Joe O'Brien thought, some gigantic dark flower that bees would enter to sip nectar and rub fertile dust from their legs.

This was in Pontiac County, Quebec, in the early 1900s. The Pontiac. Most of the people up there were farmers, though it really was a fur country, a timber country, and perhaps never should have been farmed. People from the longhouse nations had skimmed through in birchbark canoes, taking game, taking beaver, never so much as scratching the meagre soil. Lumbermen had come for the white pine and moved on as soon as they had taken the choicest timber. The early settlers were Famine Irish, and French Canadians moving up from overcrowded parishes along the St. Lawrence: people hungry for land, with nowhere else to go. The children dancing with the old priest were two sisters and three brothers, of whom Joe O'Brien was the oldest. There were stories that their grandfather had been a horse trader in New Mexico and a buffalo hunter in Rupert's Land before taking up a farm in Sheen Township and piloting log rafts on the Ottawa. Every few years he left his wife and children and went venturing, sometimes as far as California, once back to Ireland. One spring he did not return, and he was never seen again. One story said he had drowned at Cape Horn, another that he'd been robbed and murdered in Texas.

There was a restless instinct in the family, an appetite for geography and change. On St. Patrick's Day 1900, Joe's father, Michael O'Brien, left his wife and children and joined a regiment of cavalry being raised at Montreal to fight the Boers.

Joe O'Brien had inherited from his father the Black Irish colouring: pale skin, blue eyes, and jet black hair. The others — Grattan and Tom, Hope and Kate — were mostly fair (Hope was a redhead), with pale blue eyes and skin that was pink in winter, tawny in summer. They all had good teeth and long legs and rarely were ill. Their mother, Ellenora, had lived all her life in the clearings and knew the herbs growing wild, which mushrooms were safe to eat and which weren't, and by which streams the choicest fiddleheads could be found. She made sea pie, using every kind of wild meat. If a child took sick she brewed maroon tea with treebark and dried gooseberries. She made poultices from leaves, herbs, and scraps of cloth, and if someone had a fever she burned dried grass and brushed smoke over their heads, muttering spells using Algonquin and Irish words that no one, not even herself, really understood.

In the old priest's house the children were learning table manners and geometry as well as the waltz. And absorbing a way of seeing the world as a mystery — layered, rich. The old priest, Father Jeremiah Lillis, SJ, was a New York Irishman, short, barrel-chested, and nearly seventy when he came into the Pontiac. The remote parish was his first pastoral appointment. Before banishment to Canada he had been a scholar, a teacher, a dreamer. He had been sent into exile after it came to the attention of his superiors that certain funds belonging to the New York house were missing. In fact the old man had given away the order's money, as well as his own, to various men and women whom he loved. For these sins, and a few others, he had been dispatched to the Pontiac.

The stout little priest shaved infrequently, so the rasp of his cheek was always rough and sharp, and his breath smelled of cigars and sweet wine. Leading his partner, he would hum the melody, his shoes bussing the Tabriz carpet, building small static charges that sparkled at his fingertips.

On the train north, leafing through the Relations of Brébeuf and the other Jesuit martyrs, he had read of the seventeenth-century black robes sent as missionaries into the same country only to have their hearts eaten by Indians. By the time the train halted at the Canadian border he was in tears, and very tempted to disembark, but he had nowhere else to go. He had his trunks and crates and what remained of his collections of oil paintings and china, his table silver and beloved Persian carpets, but the Monsignor had sent him off without enough cash in his purse even for a return ticket to New York. So he remained aboard the train and came eventually to his remote and lonely parish, St. Jerome the Hermit, at Sheen, where he met Joe O'Brien during that first, awful northern summer of mosquitoes and forest fires, of air limned with smoke and smutted with cinders.

The black-haired boy had come by the rectory, selling firewood. "You'll want nine cords, Father. What I have is mostly beech, with some maple and birch and some pine. No spruce, guaranteed. Four dollars a cord, bucked into two-foot lengths, split, delivered, and stacked. You'll not get a better price."

Later the priest would decide that the young O'Briens, and even their haggard mother, had a strange, rough beauty. What was it about young Joe especially? The blackness, the pallor? The clear blue eyes? Was it the boy's gift for silence? On his own part, it wasn't lust. He had many times burned with lust, and he was done with it. At least, he would never again confuse it with love.

The priest was unpacking and shelving his books in the room he had decided to use for his study when Joe returned with a wagon and the first two cords. He began toting load after load of firewood up the rocky little path and into the woodshed, using a canvas sling and a tumpline around his forehead. Father Lillis had thought himself the loneliest person in the world, but watching Joe at work, he decided that the black-haired boy — in his silence, in the ferocious way he drove himself — might be even lonelier.

On the second day Joe got his two younger brothers at work on the stacking, but he did most of the carrying himself, the tumpline taut on his brow, neck muscles supporting the weight, body bent and braced. As if he were struggling down Broadway, the old priest thought, in the maw of a wicked wind. He brought out a jug of lemonade and insisted that Joe pause long enough to take a glass.

"Why so fast, lad? Now, what's the rush? You're killing yourself."

"It's easier to run than walk, Father."

The old priest believed in the accessibility of the spirit world, though the dogma of his own religion was against it. In Paris, in New York, and once in Worcester, Massachusetts, he had visited the sage-scented, candlelit parlours of table-rapping mediums. It was wicked and he risked burning in hell for his apostasy, but for much of his life he had been attending séances, wearing a cheap business suit as a disguise.

Perhaps the old priest was a fool for love. Or perhaps, as he hoped, exile and loss had clarified his vision. In any case, there it was: a blackhaired boy; brackish, smoky air with shafts of nearly purple light falling between the shadows of big pines; and an old, disgraced priest feeling all of a sudden powerfully, mystically, spiritually needed. He gave himself permission to become the boy's father in spirit. Whether Joe ever reciprocated, ever felt himself to be his son, was never clear to the old priest, who tried telling himself that it didn't matter.