NPR stories about Island of Vice 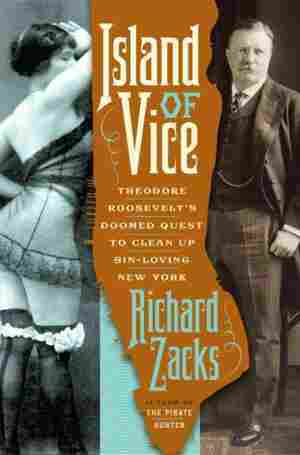 March 25, 2012 • When Teddy Roosevelt became a New York police commissioner in 1895, he vowed to clean up the city's endemic vice and corruption. It didn't exactly work out. New Yorkers liked the idea of standing up to corrupt cops, but they rebelled when Roosevelt tried to enforce a ban on Sunday drinking. 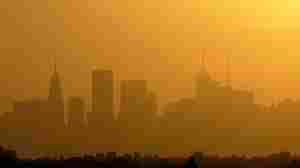 March 19, 2012 • If you want to know anything about America's greatest city, you've got to be willing to get grimy, says critic Maureen Corrigan. Two new books about New York — a novel and a narrative history — do more than put up with filth, they positively wallow in it.

Theodore Roosevelt readily admitted he "knew nothing of police management," but would try to frame that lack of pre-conceptions as a positive. He would describe the upcoming week as the hardest stretch he had ever worked in his life and report that he found the department completely "demoralized". That word, circa 1890, still packed more of the meaning of lacking any moral compass than depressed. Half the precincts lacked captains, because of suspensions and retirements.

TR arrived early to the office and fidgeted waiting for Commissioner Parker, who, Roosevelt was discovering, often seemed to operate a bit on a parallel track all his own. When Parker showed up late at 11:23 a.m., TR immediately gaveled the meeting to order.

Roosevelt was feeling out his new colleagues. Parker, a former Assistant District Attorney, seemed an astute lawyer, with an eye for detail; Grant, a former Ambassador to Austria, was congenial. By the end of the week, TR would confide to a close friend: "Parker is my mainstay; he is able and forceful but a little inclined to be tricky. Andrews is good but timid and "sticks in the bark." (as in, an arrow that doesn't penetrate deeply into the tree) Grant is a good fellow but dull and easily imposed on; he is our element of weakness."

Roosevelt, with his usual impatience, orchestrated a break neck pace. The previous Board in one of its last meetings had passed a resolution authorizing the annual police parade, a popular NYC civic event that ranked right up with Fourth of July and St. Patrick's Day. Roosevelt abruptly brought a motion to cancel the parade. Every year hundreds of thousands of people lined the streets as the men in blue marched by, not in a locked step drill but rather as a kind of informal victory parade, with proud captains leading on horseback and police bands playing. Chief Byrnes was quietly making elaborate preparations. With no discussion, the Board unanimously passed a motion to cancel; the only explanation given was the Board was too busy with other important matters.

Clearly this represented a symbolic quashing of Byrnes and the Old Guard. And Roosevelt privately told Jake Riis: "We will parade when we need not be ashamed to show ourselves."

Next item that morning: election reform. The police then oversaw elections, checking voter registration, monitoring polling places and counting the votes. (That was Albany's stated reason for a bi-partisan police board, not equal divvying of graft.) The board, to ensure fairness, passed a motion that all policemen must resign immediately from all political clubs and must stop giving donations. The Democratic Pequod Club, was chockablock with Tammany Hall police officers, such as Big Bill Devery, appealing his dismissal, and Inspector William McLaughlin, then on trial for bribery.

In a further effort to banish politics from policing, Roosevelt also suggested that all job applications no longer contain any reference to a man's party loyalties. He wanted the message out that ward-heelers from both parties would find no jobs to hand out in the Police Department. "The ordinary politician is as keen to scent out places [i.e., jobs] as a pig is after truffles," Roosevelt told Steffens for an Evening Post article. So the Board passed a measure that even the janitors and laborers would become civil service appointees.

Next item that Monday: discipline. The Board quickly agreed that it would double or triple the punishments, especially for drunkenness on duty. Andrews recited several cases including the one of patrolman, Peter MacDonald of King's Bridge precinct in the northern Bronx, who had been caught sleeping in a railway station, twice in the same night. The old regime might have slapped him with two-day fine. Checking the man's record, Commissioner Parker discovered that MacDonald had racked up 30 complaints against him, including many for being in saloons and bars. Parker recommended dismissal. Roosevelt suggested a commutation of sentence to 30 days' fine but to announce to the force that this was special "leniency" of the new Board and that all punishments hereafter would be much stiffer. (Two days later, they would fire repeat-offender Joseph Flynn for being caught in a saloon. "It is time an example was made of somebody," declared Roosevelt.)

The new Board also voted to review the entire system of police discipline, which was then anchored in a poisonous relationship whereby supervisors called roundsmen sneaked around the beats of patrolmen and spied on them. The more infractions the roundsmen found, the better their chances for promotion to sergeant. The Board had the novel idea that roundsmen should be promoted when the patrolmen reduced crime on their beats and did their duty.

Next item: Dismissal from the force. Roosevelt passionately wanted the right to fire any officer, without the fear of a court overturning it. "I want every decent man on the force to know that I am his best friend [but] every bad policemen we will get rid of as fast as we can," said Roosevelt. "We want neither loafers nor shirks, nor corrupt men of any kind." Under current rules, a dismissed officer could appeal to the criminal courts, which, in effect, meant that the Board, to avoid being overturned, had to build rock solid cases, and use due process for witnesses and evidence. These standards were more rigorous and costly than a private employer firing someone. The Board sent an urgent official message to Albany imploring the legislators to pass a bill denying dismissed policemen the right to appeal their terminations to the courts.

The board also discussed ways to deny pensions to corrupt cops, who might now rush to retire to avoid life under a Reform Board. Such a strategy might also help save the pension fund from an impending deficit. Parker would investigate. The Board sent a memo to the chief that cushy "special assignments," such as guarding foreign dignitaries, should be based on seniority and valor instead of Tammany connections. To emphasize the positive, they discussed giving out more merit awards for bravery. The Board immediately voted a medal of honor to patrolman Michael Nolan of East 104th Street precinct who had leaped in the fast-moving current East River and saved a boy from drowning.

Those were just a few of the topics/items/tasks broached/taken up at that Monday meeting. The New York Recorder commented that the new Board accomplished more in this one meeting than former regimes did in four months; it certainly marked a strong collegial start for Reform.