How To Unleash Your Creative Potential By America's Master Communicator

George Lois, the advertising guru said to be the inspiration for Mad Men character Don Draper, offers indispensable lessons, practical advice, facts, anecdotes and inspiration for all those looking to succeed in life, business and creativity.

NPR stories about Damn Good Advice (For People With Talent!) 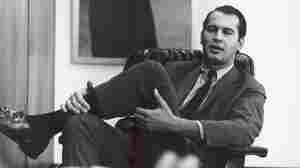 George Lois, pictured above in the early 1960s, was a pioneer during the "Creative Revolution" of American advertising. Courtesy Phaidon Press hide caption

March 19, 2012 • Pioneering ad man George Lois is here to help you "unleash your creative potential." In his new book, Lois shares his secrets for making a catchy commercial that will stick in your head. The No. 1 rule? Be outrageous.

Looking up from my crib on a dark and stormy night, God commanded: "George, be careful." (I remember it well.) My earliest childhood recollections were punctuated by three words (in Greek) from the lips of my mother, Vasilike Thanasoulis Lois: "George, be careful." They have been a refrain throughout my life–a sincere admonition from the lips of people who have always meant well but never fathomed my attitude towards life and work. In the act of creativity, being careful guarantees sameness and mediocrity, which means your work will be invisible.

Better to be reckless than careful. Better to be bold than safe. Better to have your work seen and remembered, or you've struck out. There is no middle ground.

MTV, now regarded as a "sure thing from the start," was an abject failure after its first full year of operation. But in 1982 I got rock fans to phone their local cable operators and yell, I want my MTV. Overwhelmed, the operators called the Warner Amex cable-TV network and begged them to stop running my commercials because they didn't have an army of telephone operators to answer the calls, and Warner Amex immediately surrendered. MTV was alive and rockin.' A few weeks before, when I had presented my campaign idea to their execs, they insisted that no rock star would assist MTV because music publishers feared the MTV concept would kill their business, record companies swore they would never produce music videos, advertisers considered it a joke, ad agency experts snickered, and cable operators scoffed. But with one pleading phone call to London, I convinced Mick Jagger to help (for no dough), and 20 years before the bad boy of rock became a knight of the realm, I anointed Sir Mick the patron saint of MTV. Within a few weeks of the premiere of Jagger picking up the phone and saying I want my MTV, every rock star in America was calling me, begging to scream I want my MTV to the world.

The lesson (which most ad agencies have never understood) is that great advertising can perform a marketing miracle!

30. I didn't have to be Jewish to love this campaign. So do what I did — get a job at a place that creates work that thrills you.

Witnessing the wit and power of the brilliant Levy's Rye campaign, when I was already making a name for myself in the design field in my mid-20s, I knew Doyle Dane Bernbach, the pioneering creative agency of the twentieth century, was in my future. Bill Taubin, one of their ace art directors, and copywriter Dave Reider, a gemütlich pair if there ever was one, sold an ethnic product by tapping the warmth of human experience. In a series of posters, they depicted the reaction of a Native American, an Irish cop, a Chinese laundryman, a Catholic choirboy, a young African-American, even Buster Keaton, after biting a mouthful of a sandwich made with Levy's real Jewish rye; a mnemonic slogan and a mnemonic visual, synergistically blending and communicating in a nanosecond (see 64). In 1958, when I was hired by DDB's legendary boss, Bill Bernbach, this Greek "goy" sought out Taubin and Reider and genuflected, thanking them for the inspiration they instilled in my blooming career. No matter what field you're in, identify the revolutionary leaders, and create for those who have the capacity to thrill your Big Ideas.

64. A truly great ad campaign is driven by a Big Idea that contains: 1. A memorable slogan! 2. A memorable visual!

A memorable visual, synergistically blending with memorable words that create imagery which communicates in a nanosecond, immediately results in an intellectual and human response. The word imagery is too often associated purely with visuals, but it is much more than that: imagery is the conversion of an idea into a theatrical cameo, an indelible symbol, a scene that becomes popular folklore, an iconographic image. And this imagery should be expressed in words and visuals or, ideally, both! Shown is a sissy, superstar tour de force of some of the greatest macho sports icons of the 1960s, weeping and moaning I want my Maypo! (an oatmeal cereal) on TV, a single-minded merger of words and pictures that American kids ate up.