The Story of English in 100 Words

The Story of English in 100 Words

Title
The Story of English in 100 Words
Author
David Crystal

Demonstrates how the history of English vernacular is reflected in 100 words with sources in key influences and events, from "roe" and "loaf" to "fopdoodle" and "twittersphere."

NPR stories about The Story of English in 100 Words 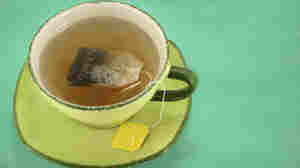 "Tea" (a social word from the 17th century) is one of the words David Crystal examines in his book The Story of English In 100 Words. iStockphoto.com hide caption

May 25, 2012 • Linguist David Crystal believes every word has a story to tell, even the ones as commonplace as "and." In The Story of English in 100 Words, he compiles a collection of words — classic words like "tea" and new words like "app" — that explain how the English language has evolved. 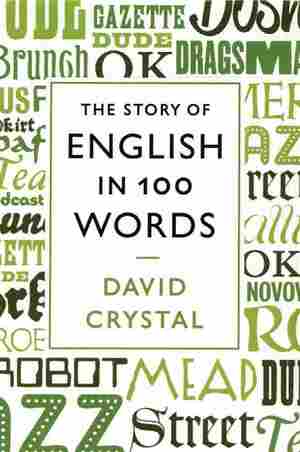 April 2, 2012 • Linguist David Crystal believes every word has a story to tell, even the ones as commonplace as "and." In The Story of English in 100 Words, he compiles a collection of words — classic words like "tea" and new words like "app" — that explain how the English language has evolved.

Excerpt: The Story Of English In 100 Words

What has a man about to be married got to do with someone who looks after horses? People have come up with some crazy explanations. Perhaps, in a male-dominated society, the man was thought to be 'grooming' his bride, or giving her the value of a horse? Or perhaps, more romantically, he was going to carry her off on his horse? The truth is less exciting, but linguistically more illuminating.

The word for a man about to be married, or just married, is found in an Anglo-Saxon version of the Gospel of St John, but it turns up in an unfamiliar form: brydguma. This is a compound of bride and guma, which was a somewhat poetic Old English word for 'man'. Half a millennium later, in Tyndale's translation of the same Gospel, it appears as brydegrome. Why the change?

During the Middle English period, the word guma fell out of use. Probably most people never used it at all, for the recorded instances are all very literary. It must have been an odd experience, hearing the word brideguma when someone got married. Everyone knew what bride meant, but guma was a mystery.

Why did people replace gome with groom? Because the sound and the meaning of the two words were very close. When groom first arrived in English, in the 13th century, it meant simply 'man-child', 'boy'. It then broadened its meaning to apply to adults, and soon seems to have been restricted to a particular kind of adult male — someone who had an inferior position in a household. By the 16th century, this sense of 'servant' had narrowed further to mean an attendant who looks after horses, and this is the primary sense today — though the older use is still seen in the titles of some members of the British royal household, such as Groom of the Chamber.

So, at the end of the Middle English period, when guma was disappearing, groom, meaning 'man', would have been a natural replacement. And thus we have the modern form, which basically means nothing more than 'bride's man'.

The history of English has many examples of this kind of development — what is called 'popular' or 'folk' etymology. When people encounter an unfamiliar word, they often try to make sense of it by relating it to a word they already know. And if enough people make the same guess, the new formation can become part of the language. We see popular etymology operating again when we button-hole people: we've quite forgotten that originally what we were doing was 'button-holding' them. And it's there when we jocularly call asparagus 'sparrow-grass'.

People started to use the word fopdoodle in the 17th century. It was a combination of fop and doodle, two words very similar in meaning. A fop was a fool. A doodle was a simpleton. So a fopdoodle was a fool twice over. Country bumpkins would be called fopdoodles. But so could the fashionable set, because fop had also developed the meaning of 'vain dandy'. Dr Johnson didn't like them at all. In his Dictionary he defines fopdoodle as 'a fool, an insignificant wretch'.

Fopdoodle is one of those words that people regret are lost when they hear about them. There are several delightful items in Johnson's Dictionary which we no longer use. He tells us that nappiness was 'the quality of having a nap'. A bedswerver was 'one that is false to the bed'. A smellfeast was 'a parasite, one who haunts good tables'. A worldling was 'a mortal set upon profits'. A curtain-lecture was 'a reproof given by a wife to her husband in bed'.

Every generation gives us new words which eventually disappear. I once did a study of words that were being feted as 'new' in the 1960s. Over half of them have gone out of everyday use now. Do you recall Rachmanism, Powellism, peaceniks, dancercise, frugs, and flower people? All frequent in the 1960s. Historical memories today.

It's always been like this. But dictionaries are notoriously reluctant to leave words out — for the obvious reason that it's very difficult to say when a word actually goes out of use. You can spot a new word easily; but how do you know that an old word has finally died? Did grody (slang 'nasty, dirty') die out in the 1970s, or is it still being used in the back streets of Boston?

On the whole, dictionaries keep words in, either until constraints of space force some pruning, or a new editorial broom looks at the word-list afresh and says 'Enough is enough'. That's presumably what happened in 2008, when the editors of the Collins dictionary decided that some words are so rare these days that nobody would ever want to look them up. They blamed pressure on space in the dictionary: with 2000 new words to include, several old words would, regrettably, have to go. They included abstergent ('cleansing or scouring'), compossible ('possible in coexistence with something else'), fatidical ('prophetic'), fubsy ('short and stout'), niddering ('cowardly'), and skirr ('a whirring or grating sound, as of the wings of birds in flight').

The Times was having none of this. In its issue of 22 September 2008 it launched a campaign: 'How you can help to save some cherished words from oblivion'. People could vote to save the words they fancied. Collins, which is owned by News Corporation, parent company of The Times, agreed that words would be granted a reprieve if evidence of their popularity emerged.

It was a curious headline, if you think about it, for if these words were being genuinely cherished, why should they be in this list at all? Nevertheless, there was quite a reaction. Andrew Motion went on record as supporting skirr. Stephen Fry was all for saving fubsy. Indeed, a 'save fubsy' online petition group was set up.

Just because words are left out of a dictionary of standard English doesn't mean that they have disappeared from the language, of course. Some of the words remain alive and well in regional dialects. I know niddering and skirr are still used in parts of Scotland and the north of England, and fubsy (along with fub, 'stout') is mentioned in several dialect books.

It's a daring decision, to leave a word out, because you can never predict the future with language. A word or phrase can be obsolescent, then suddenly have its fortunes reversed by being used by some celebrity. Or attitudes change towards a word, so that one generation loves it and the next hates it and the next loves it again. But whatever has happened to words in the past, the future is going to be very different. The Internet is changing everything, because in an electronic world dictionaries can be of unlimited size, pages are time-stamped, and nothing disappears. The Internet is already the largest corpus of attested historical language data we have ever known. In that dictionary, words never die. Even fopdoodle, attracting a lowly 7,500 hits on Google in 2011, will live on. If words could talk, they would say they had finally achieved what they always wanted: immortality.