A post-apocalyptic thriller follows the experiences of a man who wakes up paralyzed with no memory of his life and who is urged by people who say they know him to reclaim a critical object and return to a frozen state before time runs out. 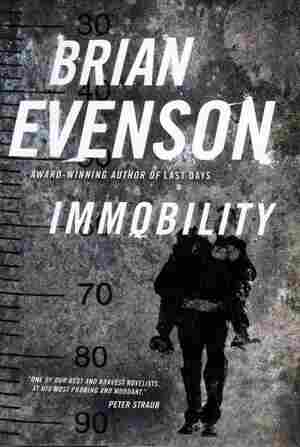 April 12, 2012 • After a cataclysm decimates the planet, a man wakes up paralyzed and without any memory of the past. Critic Michael Schaub says Immobility is the terrifying tale Brian Evenson was born to write.

When they first woke him, he had the impression of the world becoming real again and he himself along with it. He did not remember having been stored. He could remember nothing about what his life had been before the Kollaps, and the days directly before they had stored him were foggy at best, little more than a few frozen images. He remembered tatters of the Kollaps itself, had a fleeting glimpse of himself panting and in flight, riots, gunfire, rubble. He remembered a bright blast, remembered awakening to find himself burned and naked as a newborn—or perhaps even more naked, since all the hair had been singed from his body or had simply fallen out. He remembered feeling amazed to be alive, but, well, he was alive, it was hard to question that, wasn't it?

And then what? People: he had found them, or they had found him, hard to say which. A few men banded together, acting "rationally" instead of "like animals," as one of them must have put it, attempting to found a new society, attempting to start over.

Not having learned better, he thought grimly, the first time.

Was it all coming back to him? He wasn't sure. And how much of what was coming back was real?

What was his name again?

His eyelids were closed, but there was the slightest gap between them. He could just see out, could see light, a slight blurriness of semi-differentiated figures, nothing more. He tried to will his eyes open further, failed. Nor could he move the eyes themselves: they stayed staring, fixed, his mind very clumsily processing the thin slit of reality available to them.

He tried to swallow, but couldn't move his throat. Am I breathing? he wondered, but figured that no, he was in storage, he wasn't breathing, wouldn't breathe until he was fully awake. Assuming he understood the process properly, he was still frozen. He shouldn't be experiencing anything at all yet, shouldn't even be able to think. Why could he?

Horkai, he thought suddenly. Josef Horkai. That was his name. It came, flashing back and forth and painfully through him. He tried to keep hold of the name, tried to wrap it around himself and tie it in place with something else, some other fact, anything.

Horkai, he thought. Occupation? Before the Kollaps? Now?

Nothing came. Be patient, he told himself. Let things come as they will.

And then the name flopped away, vanished in darkness. He tried again to blink, and one eyelid closed fully and held there. The other remained as it was, slit open, but the pupil behind it began to slide, smearing away the little bit of blurred vision he had and coming to rest against the backlit inside of the lid.

He sensed something on the horizon, in the vague redness, coming toward him. His eyelid slid open a little, but he couldn't tell if he had done it or if it had been done to him.

And then there was a roaring and what was coming arrived and turned out to be pain, madly beating its wings. He hurt like hell, every part of him, and since he could not tell where he ended and the rest of the world began, it felt like the entire world was awash in fire. And still he couldn't move, couldn't cry out, couldn't take air into his lungs, nothing. It was terrible, as terrible as anything he had ever felt.

And then slowly it receded, melted away, leaving in its wake a slow twisting and turning of naked sensation that refused to drain off. He could feel parts of himself now, though those parts still felt awkward and dampened, as if wrapped in gauze. One of his eyes sprang open and he could see a blurred thumb and forefinger sheathed in latex holding the eyelids apart. Behind and past them, an arm and vague shapes, several of them, that he guessed to be human. Similar to human, anyway. And then suddenly a blazing circle of light.

"Pupil contracts," he heard someone say. A male voice, hoarse, similar to the one he had heard earlier. "Vision's probably okay."

The blazing circle disappeared, its afterimage tracking across his vision and the figures resolved briefly into being. And then the thumb and forefinger let go and he saw only the inside of his eyelid again.

"What was that?" asked someone new, in a distracted voice.

None of the voices sounded familiar. Then again, why should they?

"I said," the first voice said, louder this time, "that he'll probably be able to see."

"That's not what you said."

"Vision's probably okay, I said. Amounts to the same thing."

"Have it your way," said the other. "Hand me the hypodermic."

Silence. And then all at once the remnants of sensation that had been eddying seemed about to burst. All his nerves burned at once. He tried to scream but nothing came out.

He lay there immobile, certain he was dying, until, mercifully, like a candle, he was snuffed out.