Accessibility links
Learning From The Octopus NPR coverage of Learning from the Octopus: How Secrets from Nature Can Help Us Fight Terrorist Attacks, Natural Disasters, and Disease by Rafe Sagarin. News, author interviews, critics' picks and more.

Learning From The Octopus

Learning From The Octopus

How Secrets From Nature Can Help Us Fight Terrorist Attacks, Natural Disasters, And Disease

Title
Learning From The Octopus
Subtitle
How Secrets From Nature Can Help Us Fight Terrorist Attacks, Natural Disasters, And Disease
Author
Rafe Sagarin

An ecologist applies his knowledge to the study of security and disaster prevention, arguing that the natural world can provide better strategies for averting catastrophe than the ones found in our bureaucratic system of agencies and experts.

NPR stories about Learning From The Octopus 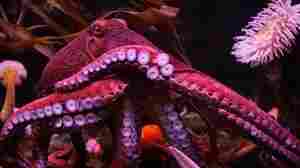 May 13, 2012 • Ecologist and "natural security expert" Rafe Sagarin thinks our systems for dealing with natural disasters and terrorist attacks need to be updated. The best place to turn for advice? Other organisms.

Excerpt: Learning From The Octopus

On the morning of December 26, 2004, animals across Asia and Africa were acting strangely. Elephants elicited horrific bellows, herds of oxen bolted for higher ground, and domestic dogs refused to go on their morning walks along the beach. In some cases, bewildered humans followed the lead of their charges to higher ground, but many did not. Less than an hour later, the ocean was sucked back far from shore and a huge tsunami thundered all across India, Africa, and southern Asia, killing 225,000 people — one of the worst catastrophes in modern history.

After the floodwaters retreated, international aid poured in, with particular attention paid to installing state-of-the-art tsunami warning systems across the region. Yet in comparison to the animal-based warning systems, these high-tech solutions are still fairly primitive. Just a few years after the tsunami, villagers in the Aceh province of Indonesia, one of the hardest hit areas, angrily stoned their tsunami alarm until it was destroyed. The villagers felt the annoyance of the system's false alarms outweighed its purported benefits in early warning.

Destroying alarm systems that are supposed to protect us isn't uncommon. In the United States, residents of over 21 million households have tampered with, destroyed, or disabled their own smoke detectors because of the nuisance of false alarms. In fairness to the makers of smoke and tsunami alarms, such technologies have only been around for a few decades — a fleeting fraction of Earth's long and violent experience with tsunamis, floods, and fire. By contrast, the surprisingly accurate security systems demonstrated by the animals before the tsunami have been developed and fine-tuned over billions of years, and this illustrates a major point: there is no technological solution that can prepare us for the risks of a highly variable and unpredictable world as well as the ancient natural process of adaptation.

Indeed, just a few weeks before the 2004 tsunami, the most technically sophisticated military force in the world inadvertently and quite publicly demonstrated how poorly adapted it was to its latest challenge. It happened during a pretty standard piece of military propaganda set up for the evening news. The U.S. secretary of defense was to helicopter in to the edge of a war zone to bolster the troops' morale, listen sincerely to their concerns, and assure them that all of America was fighting right there alongside them. But it didn't turn out that way for Secretary of Defense Donald Rumsfeld in Kuwait on December 8, 2004. To the cheers of several thousand soldiers assembled, Specialist Thomas Wilson, a 31-year old Tennessee National Guardsman, pointedly asked the secretary why he and his fellow soldiers were being forced to rummage through garbage dumps to find armor to strap on to their vehicles, which provided inadequate protection in the combat zone. Rumsfeld was initially taken aback, then tartly retorted, "You go to war with the Army you have."

It was a pivotal moment in how George W. Bush's war in Iraq was going to be interpreted. The left seized on it as yet another example of the "chicken hawks" in the Bush administration cruelly sacrificing their pawns in an elective game of geopolitical chess. The right amplified reports that Wilson was "fed" his question by a Chattanooga Free Press reporter — more evidence that the liberal media was out to sabotage an essential front in the "War on Terror." Even fairly level-headed commentators couldn't help but contrast the scrappy U.S. soldiers rummaging around junk piles for "hillbilly armor" to weld to their vehicles against the disinterested, out-of-touch button-down government bureaucrat. But the most important contrast the exchange belied hasn't been well noted — it was the difference in adaptability demonstrated between soldiers like Specialist Wilson and a large security organization like the Department of Defense (DoD). This is, in fact, the same difference in adaptability between animals sensing and responding to a tsunami and tsunami alarms sensing and responding to something that may or may not be a tsunami.

For armies fighting a war, for health practitioners trying to ward off a flu pandemic, for first responders containing the damage from a natural disaster, for IT managers trying to protect a computer network, for resource managers trying to plan for a world dramatically altered by climate change, for CEOs worried about the next stock market crash, and for any citizen worried about the effects of any of these potential threats, adaptability is essential. If we want to interact with the world at all (and in a world of 7 billion people, we don't have much choice), having the ability to change how we interact with it is the only way we can survive.

For the troops on the ground, the process of adapting began soon after the invasion of Bagdad. They "went to war with the Army they had" (to paraphrase Rumsfeld), and it worked brilliantly for a while. With massive firepower, better training, and air superiority, even the most feared of Saddam Hussein's forces virtually collapsed in front of the advancing coalition. But as the old regime collapsed, the ground became rich for any number of new threats to sprout up. The threat environment radically changed.

Suddenly, thousands of soldiers, independently as individuals and linked through the units they fought with, were observing that hidden improvised explosive devices (IEDs) were becoming their biggest threat to security. Whereas the DoD had planned for a war against AK-47s, Scud missiles, and weapons of mass destruction, soldiers on the ground began to see their enemies as random trash piles, sudden fender benders in downtown traffic, and cell phones; hiding, distracting from, and detonating IEDs. By the time Wilson was so incensed as to dare breach military protocol to give a superior officer a dressing down, 266 of his colleagues had been killed due to IEDs.

The soldiers adapted the best that they could — welding metal plates to their vehicles, blocking up culverts to eliminate the most obvious niches for bombers to use, and learning to identify the signs of hidden bombs in otherwise unremarkable debris. But their ability to adapt was limited by forces beyond their control — by the equipment they were given, by the available scrap metal, by the rules of engagement that they were ethically and legally bound by — and the casualties mounted.

By contrast, the Department of Defense had virtually unlimited resources, especially after the terrorist attacks of September 11, 2001, when no politically minded senator or representative would ever turn down a military appropriation request. What the DoD lacked was adaptability. Even as Specialist Wilson and his comrades were frantically tracking the rapidly changing tactics of insurgents, the DoD was slowly churning away on weapons systems and fighting procedures that had been dreamed up long ago in places far, far away from the streets of Baghdad and Fallujah. Rumsfeld's retort to Wilson belied a centralized view whereby small numbers of intellectuals design a battle plan and the accompanying technology years in advance, and that's what you go to war with. Moreover, even to bring the idealized technological solutions to deal with the threats theorized by DoD experts, the department was bound by a ponderous top-down procurement system in which a small number of large contractors submitted bids for development of weapons systems that inevitably ran over-budget and beyond the estimated timeline.

As a result, until Specialist Wilson's outburst, the upper reaches of the DoD were neither sensing changes in the threat environment nor responding quickly when new threats were correctly identified. And even after congressional outrage from the exchange between Wilson and Rumsfeld fueled calls to speed up production and deployment of mine-resistant ambush-protected vehicles (MRAPs), they did not arrive in Iraq in until November 2007, nearly three years later. By that time, an additional 1,589 of Wilson's colleagues had been killed due to IED attacks. The DoD solution certainly arrived too late to save their lives, but also too late to even deal with the original threat. A rapid downward trend in IED attacks and deaths was already well on its way by the time the MRAPs arrived in Iraq.

From Learning from the Octopus: How Secrets from Nature Can Help Us Fight Terrorist Attacks, Natural Disasters, and Disease by Rafe Sagarin. Copyright 2012 by Rafe Sagarin. Excerpted by permission of Basic Books, a member of The Perseus Books Group.