The Twelve Days of Disaster That Gave Birth to Modern Chicago

Documents the harrowing twelve-day period in Chicago in 1919 during which a blimp crash, a race riot, a crippling transit strike, and a sensational child murder case challenged the city's modernization efforts.

NPR stories about City of Scoundrels 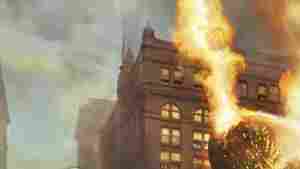 May 12, 2012 • In 1919, Chicago was called the "youngest great city in the world." World War I had just come to a close, troops were coming home, industry was booming and crime was down. But in mid-July, just about everything that could go wrong in Chicago did.

The Spanish influenza had nearly killed Carl Otto that summer, but now the young bank telegrapher, clearly on the mend, was eager to return to work. On the warm, sunny morning of Monday, July 21, therefore, he rose early to prepare for his commute. His wife, Elsie, was concerned about his health and tried to discourage him. Carl was still not well, she insisted, and his extended sick leave didn't officially end until tomorrow. Couldn't he put off work for just one more day?
But Carl was adamant. He truly enjoyed his job at the bank and valued his reputation as a conscientious worker. And although he knew better than to make light of his illness (the recent fl u epidemic had already killed more people than the Great War had), he felt he should delay his return no longer. He was, after all, an employee of one of Chicago's premier financial institutions: the Illinois Trust and Savings Bank, located right in the heart of the downtown Loop district. Standing at the foot of the Chicago Board of Trade Building on the corner of LaSalle Street and Jackson Boulevard, the bank was an important conduit for the countless transactions generated each day by the largest and most significant commodities exchange in the world. New York's Wall Street may have been the center for the trading of company shares, but it was in the pits of the Chicago Board of Trade that the fate of real things — of wheat, corn, hogs, lumber, cattle, and oats — was determined. Populations worldwide were dependent on it for the raw fuel of civilization itself.
As telegrapher and "all- around utility man" for the Illinois Trust, Carl Otto was a vital cog in the complex machinery of that market. From his telegraph desk in the bank's central courtyard, right under the building's distinctive two-story skylight, he kept his employers and their clients in close communication with the financial centers of the East Coast. As a translator for the Foreign Department (Carl had been born in Germany and spoke several languages), he also facilitated transactions with companies in the grain-importing countries of Europe and Asia. Besides, Monday was usually the bank's busiest day of the week. Carl felt that he had to go back.
The couple discussed the matter over breakfast. In Elsie Otto's opinion, the worldwide commodities market could surely survive without her husband until Tuesday. She argued that their son, Stanley, a six-year-old orphan whom the couple had adopted some time before, would appreciate another day of his father's company. But Carl would not be dissuaded. Determined to be punctual on his first day back, the telegrapher said good- bye to his wife and son, left their little cottage at 4219 North Lincoln Street on the city's far North Side, and headed for the Loop.1

At roughly the same hour about twelve miles south — at 5448 Calumet Avenue, in the city's Washington Park neighborhood — Earl H. Davenport was also just leaving home for his morning commute. After years of working as a sportswriter for various newspapers around town, Davenport had recently switched careers. He had taken on a public relations job representing the White City Amusement Park, South Side Chicago's most popular summer recreation center. Named after the world's fair that had done so much to boost Chicago's image a generation earlier — the 1893 World's Columbian Exposition, also known as the White City — the park was an entertainment extravaganza, a thirteen- acre playground of bowling alleys, shooting galleries, roller coasters, ballrooms, and novelty attractions such as the Midget City and a walk-through diorama depicting the famous Johnstown Flood. Handling the publicity for such a place was Davenport's idea of fun. This week, though, Earl was working on a special assignment. White City's aerodrome, leased by the navy during the recent war for the construction of B-class dirigibles, was now being used for commercial purposes again. A crew from the Goodyear Tire and Rubber Company in Akron had arrived on the site several weeks earlier to assemble one of their already fabled blimps, an airship called the Wingfoot Express. Davenport was using the opportunity to launch a major promotion. Even as the Wingfoot was being put together and tested, he was busy urging newspaper photographers and city dignitaries to come down to the White City and take a ride. Just last week, in fact, he had asked Frederick Proctor, a former sportswriting colleague who now worked for the Board of Trade, to issue invitations to the board's president and several of its other members to make a flight as official guests of the amusement park.
Davenport, a plump, balding man of unfailing good nature, planned to go up himself on one of the airship's maiden flights. As he'd written in that week's edition of the White City News, he felt just "like a kid with his first pair of red- top boots" anticipating his airborne adventure. Technical problems with the bag's carrier mechanism had postponed the blimp's debut several times, but now, on this bright Monday morning, Davenport was hoping that his luck would change. The weather was good, and the engineers had had the whole weekend to put the Wingfoot in top flying condition. Confident that he'd finally be taking to the skies, Davenport pulled on an old pair of tennis shoes — appropriate footwear for a blimp ride, he thought — and set out on his one-mile trip south to the park.

Another person hoping to get on the blimp that day was Roger J. Adams, president of the Adams Aerial Transportation Company. Having arrived in Chicago on Sunday via the overnight train from New York, Adams had quickly made arrangements with Goodyear representatives for a demonstration of the Wingfoot. His eponymous company, which had recently inaugurated a passenger-carrying hydroplane service between Albany and New York City, was now in negotiations with a consortium of Italian capitalists to start a transatlantic dirigible service. The group was considering buying the Wingfoot Express or another craft of the same type for this purpose, so Adams was eager to see the blimp in action. Knowing the value of good publicity for his nascent business, Adams had that morning contacted the Chicago Daily News to offer himself as an aviation expert qualified to comment on this exciting new technology. The paper had sent over a reporter to interview him. Dirigibles (the terms "dirigible" and "blimp" were used interchangeably in 1919) had been employed with some success on scouting missions during the war, and now many people hoped that the airships could revolutionize long-distance passenger travel and mail delivery. During his talk with the Daily News reporter, Adams waxed eloquent on the unlimited possibilities for Chicago as a center of national and international air services. "Chicago," he opined to the reporter, "will be the Blimpopolis of the Western World!" He predicted that transatlantic flights from London would end in Illinois rather than in New York, which would be merely "a crossroads aerial station" where pilots might make a whistle-stop en route. "There is no reason why passenger blimps cannot go direct from Chicago to London and vice versa," Adams concluded. "The seacoast city as a 'port' will become obsolete in the day of aerial travel."