Dispatches From The War

NPR stories about Steinbeck in Vietnam 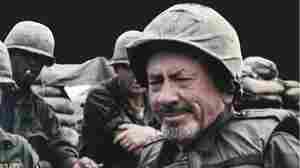 April 21, 2012 • The last piece of published writing from one of America's greatest writers was a series of letters he sent back from the front lines of war at the age of 64. John Steinbeck's dispatches shocked readers and family so much that they've never been reprinted — until now.

Read an Excerpt: Steinbeck in Vietnam

I wrote to you about the quiet patrol on the river, the silent shores and the stars doubly twinkly because of the damp atmosphere. We came into dock a little before 9 o'clock. Part of Operation Game Warden is based on Can Tho, the largest city in the Delta region. There are a few small restaurants in Can Tho where Viet people, always with their children, go to eat and talk in their language, which sounds like singing. The lights are not bright in such places. Because of power shortage most of them are lighted with flickering lamps.

At about 10 o'clock in the evening two strolling young men paused in front of a crowded restaurant and suddenly threw two grenades in at the wide open door. One was a dud. The other exploded and tore up the people and their children. There were no soldiers in the restaurant either American or Vietnamese. There was no possible military advantage to be gained. An American captain ran in and carried out a little girl of 7. He was weeping when he got her to the hospital and she was dead. Ambulances carried the broken bodies to the long building, once a French hospital and now ours. Then the amputations, and the probing for pieces of jagged metal began and the smell of ether filled the building. Some of the tattered people were dead on arrival and some died soon after but those who survived were treated and splinted and bandaged. They lay on the wooden beds with a glazed questioning in their eyes. Plasma needles were taped to the backs of their hands, if they had hands, to their ankles if they had none. The children who had been playing about on the floor of the restaurant were the worst hit by the low-exploding grenade. The doctors and nurses of the brutal, aggressive, imperialist American force worked most of the night on the products of this noble defense of the homeland.

Meanwhile the grenade throwers had been caught and they proudly admitted the act, in fact boasted of it.

I find I have no access to the thinking of the wanton terrorist. Why do they destroy their own people, their own poor people whose freedom is their verbal concern? That hospital with all its useless pain is like a cloud of sorrow. Can anyone believe that the V.C., who can do this kind of thing to their own people, would be concerned for their welfare if they had complete control? I find I can't. We and our allies too often kill and injure innocent people in carrying out a military operation. The V.C. invariably wash themselves with innocents. They set up a machine gun in the doorway of a peasant's house and herd the children close around it knowing our reluctance to return fire at the cost of people. They build their bunkers in thickly populated areas for the same reason. And people do get hurt. I've seen the care we take to avoid it, and instant care when it cannot be helped.

One wing of the old French hospital at Can Tho is for V.C. casualties. The doors and windows are barred, of course, but inside the treatment is the same we give our own. But in the eyes of the injured prisoners I saw another atrocity, the long conditioning of these minds to expect only torture and death from us and their uneasy suspicion when it did not come. These minds are crippled by the same plan which plants the satchel charge in a market or throws a grenade into a crowded theater.

I must believe that the plodding protest marchers who spend their days across from the UN and around the White House hate war. I think I have more reason than most of them to hate it. But would they enlist for medical service? They could be trained quickly and would not be required to kill anyone. If they love people so much, why are they not willing to help to save them? This country is woefully short of medical help. Couldn't some of the energy that goes into carrying placards be diverted to emptying bed pans or cleaning infected wounds? This would be a real protest against war. They would have to be told of course that their V.C. heroes do not respect peaceful intentions. They bomb hospitals and set mines for ambulances. It might be dangerous to use this method of protest, and besides, if they left the country, their relief checks might stop. But in return they might gain a little pride in themselves as being for something instead of only against.

The question comes from home so often--when will it be over? I can only guess, Alicia, but at least I am guessing on a base of observation from one end of this country to the other. I guess that a cease-fire is not too far in the future because we and our allies can meet and defeat any military foe that will face us. But a cease-fire is only the beginning. During the Christmas truce, which amounts to a cease-fire, there were over a hundred violations of the truce and not one by us. But that is not the finality of this war. The trained, professional hardcore V.C.s in their cells of three infest the country. They must be rooted out one by one until the villages and hamlets are able to defend themselves. And that may take a generation. But anyone who doubts that it can be done should look at South Korea. In one generation that is a changed people, proud, efficient and self-reliant. Their troops here in Vietnam are as fine as any in the world. And what happened to them can happen here--and must. If we are too quick to pull out or too stupid to understand the price, we may win the battle and lose the war.

From STEINBECK IN VIETNAM: Dispatches from the War, copyright 2012 by Thomas E. Barden. Excerpted by permission of the University of Virginia Press