Accessibility links
The Great Divergence NPR coverage of The Great Divergence: America's Growing Inequality Crisis and What We Can Do About It by Timothy Noah and Catherine Mulbrandon. News, author interviews, critics' picks and more.

America's Growing Inequality Crisis and What We Can Do About It

by Timothy Noah and Catherine Mulbrandon

The Hillman Prize-winning lead columnist for The New Republic and Slate critically assesses income inequality in America and the ways it threatens democracy, tracing disturbing income ratio trends throughout the past three decades while outlining an urgent call for nonpartisan solutions.

NPR stories about The Great Divergence 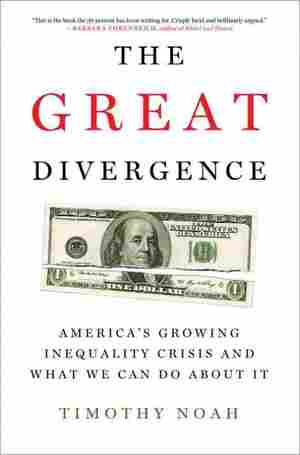 April 26, 2012 • Over the past 30 years, the growing divide between rich and poor has become an American crisis, Timothy Noah writes in his latest book. The Great Divergence is part descriptive, laying out shifting economic trends, and part prescriptive, offering several solutions to help ease the crisis.

When a grand old Washington figure reaches old age and starts to think about the legacy he'll leave behind, usually he wants to be remembered as a wise and trusted tribune of democratic governance. Clark Clifford spent half a dozen years working for Democratic presidents and four decades working as a Washington fixer for corporate clients. But when the time came to write his memoirs, Clifford titled them Counsel to the President. Bryce Harlow was different. Much admired in Washington for his probity, his political wisdom, and his gentlemanly manner, Harlow served as a high-ranking aide to two Republican presidents — Eisenhower and Nixon — and when he died in 1987, the New York Times obituary duly identified him as "a Presidential counselor and speechwriter." But the foundation that bears Harlow's name, established while he was still alive, is dedicated to "enhancing the quality of professional advocacy and increasing the understanding of its role in the development of sound public policy," that is, legitimizing corporate lobbying as a profession worthy of the public's respect. Harlow was dean of the Washington lobbyists. Henry Kissinger, in the introduction to an authorized Harlow biography published in 2000, wrote that Harlow "virtually single-handedly created the entire modern advocacy industry." (Kissinger, of course, has hired himself out for years as a "con sul tant" to private companies and foreign nations; though not exactly a lobbyist, he has marketed his prestige and connections.)

The son of a politically active textbook publisher in Oklahoma, Harlow came to Washington in 1938 to work at the House of Representatives library while he conducted research for a master's thesis about the Ways and Means Committee. During World War II Harlow was a speechwriter and congressional liaison under the U.S. Army chief of staff George Marshall. After the war he moved back and forth between Oklahoma, where he worked in the family publishing business, and Washington, where he served first on the House Armed Services Committee staff and subsequently at the White House as a speechwriter and congressional liaison for President Dwight Eisenhower (in the process switching his party allegiance from Democrat to Republican). After the GOP lost the White House in 1960, Harlow accepted an offer from Eisenhower's former defense secretary, Neil McElroy, to create a government relations office in Washington for Procter & Gamble, where McElroy was now chairman.

Joel Jankowsky, an aide to Democratic House Speaker Carl Albert during the early part of the 1970s (and subsequently a lawyer-lobbyist for the law firm Akin Gump Strauss Hauer & Feld), recalls that prior to the mid-1970s the only industries with notable Washington presence or clout were oil and gas, steel, and agriculture. Defense contractors had Washington offices, but their purpose wasn't to lobby so much as to sell products to the Pentagon. "By and large," Jankoswky told me, "the Democratic Congress was thinking about the middle class and those who hadn't reached the middle class." When Harlow opened P&G's K Street offi ce in 1961, that thoroughfare was not yet synonymous with corporate influence. Only about a dozen corporations bothered to maintain full-time lobbyists in Washington. "My tiny outpost was charged with keeping close tabs on events unfolding in Congress and the executive branch," Harlow later recalled, "and with helping Procter's top people decide which matters required their attention and presence." In time, however, "we began to do as well as look — to become players as well as observers."

One of Harlow's first assignments was to forestall a congressional ban on alkylbenzene sulfonate (ABS), an ingredient in Tide and other P&G cleaning products that didn't break down in sewage treatment and left trails of foam in rivers and streams. Harlow succeeded, but the company later bowed to public pressure and stopped using ABS. George Koch, then a Washington lobbyist for Sears Roebuck and Company, remembers teaming up with Harlow to defeat an amendment introduced by Democratic senators Albert Gore Sr. and Eugene McCarthy that would have denied capital gains (i.e., favorable) treatment to lump-sum payments from corporate profit-sharing plans. Sears and P&G, Koch later recalled, "had more money in profit-sharing than all the rest of the profit-sharing plans in the world, so it just immediately brought us together like magnets." Gore and McCarthy introduced their amendment on a Friday; by Saturday, Koch was in Chicago urging all rank-and-file employees to phone Washington to complain. "McCarthy's phone fell off the hook, mail poured in," Koch told me. Then Koch found a Sears tire changer with more money in his profit-sharing plan than the company chairman (whose capital-gains tax break had generated bad publicity in the press and brought the issue to Capitol Hill's attention). Koch arranged for the tire changer to testify at a Senate hearing to demonstrate that raising taxes on profit-sharing wouldn't just harm the swells; it would harm proles, too. The capital-gains proposal died.

By the mid-1960s, though, corporations were winning fewer such fights. A July 1962 expose by the Washington Post's Morton Mintz about the dangers that the sedative thalidomide posed to unborn children prompted Congress to pass a bill tightening safety standards for drugs. Harlow, in his speech to the Merchants and Manufacturers Association that year, warned darkly that the new law would "close the Federal fist not only around prescription drugs, but also around proprietary drugs, foods, and cosmetics." Between 1966 and 1969 Congress passed significant new laws increasing regulation of automobiles (previously unregulated at the federal level), supermarket product labels, meat safety (previously regulated only when meat products crossed state lines), gas pipelines, the information that banks provided their customers, flammable fabrics, and coal-mine safety. This consumer-protection trend, Harlow warned in a 1966 speech to a Chicago meeting of the Better Business Bureau's Research and Education Foundation, would "interdict the business-customer ties which are at the heart of healthy private enterprise" unless "the business community bestirs itself more powerfully, more unitedly, and more skillfully than it has been of a mind to do." But even this would not be enough: "Business urgently needs to devise new ways to re-demonstrate convincingly and dramatically to the public the dependability of American business and the mutuality of the business-consumer interest."

Richard Nixon's election in 1968 brought Harlow into the White House, where he ran the legislative affairs office until he was squeezed out in 1970 by Chief of Staff Bob Haldeman. In 1973 Nixon would bring Harlow back as counselor to the president after the Watergate scandal forced Haldeman's resignation. (Harlow stayed a year, leaving a few months before Nixon's own resignation, and thereafter provided frequent outside advice to President Gerald Ford.) But neither the Republicans' recapture of the White House nor Harlow's intermittent presence inside it halted the liberal trend in domestic policymaking.

From The Great Divergence: America's Growing Inequality Crisis And What We Can Do About It by Timothy Noah. Copyright 2012 by Timothy Noah. Excerpted by permission of Bloomsbury Publishing.